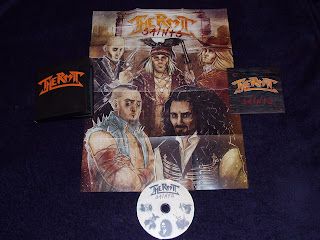 Thermiting the Reality: Another Saints to the Altars

Something completely unexpected happened to me when I opened the content of cardboard box with the Thermit’s long awaited newest offer. Inexplicably my wear changed into the cowboy one, I got chaparejos and big hat, lasso in my hand and white mustang. I no longer was wandering through Wielkopolska territory, I saw vast Texas land with rapid Rio Grande river and Austin pubs inviting me to buy a glass of whiskey and ice. It was a good idea indeed, swelteringly I took the hat off, and running with sweat I started to croon a hunter ballad. I felt the spirit of the country music possessing my senses…  Wait, wait a minute, the spirit of the country music??! Aaargghhhh, no!!! Fucking no!!!!!

Luckily that nightmare left me pretty quickly as the first tunes filled the air. Well, I was waiting for “Saints” aequo animo. You know, I didn’t take part in Thermit’s facebook informative orgy, didn’t put I like it magical incantation on each thing they threw in. Just waiting patiently. The premiere date has been planned on the first day of April, but do not expect any stupid jokes. The band appears as a just serious hectical machine and nobody could call them greenhorns. But from the beginning: externals surprises, no plastic included, cd in paper envelope with big poster to be hanged up in my sitting-room, however my wife is of different opinion. The whole unleashed in an independent way once again, yet Thermit feels like a duck in water I guess, bringing me professional product. And sound realization isn’t an ugly duckling here. What is more, it is simply brilliant! I don’t how they found this studio (Decybelia, based in Kwilcz), but the result can be described as stunning. Łukasz Frankowski gives an example how the modern piece of hot metal should be recorded and engineered. It is vivid, organic, warm, pulsating, crushing, not genetically modified, perfectly audible, thermiting, ah, is there a need to add another adjectives? Thus, if I had a band, I’d strike the gates of Decybelia for sure…

All right, quality of engineered sounds is one thing, but what about the music itself? Still having “Encephalopathy” running savagely through my mind, I required something better, to hear a progress, yet I wasn’t convinced they were able to beat the predecessor. The opening “Lady Flame” may lead my cowboy instinct into error due to initial parts of guitars. Simply, as compared to the rest, it seems to be a kind of lighter and gentle thing of band called thrashy in some way. The flaming lady gives plenty of heavy metal harmony with perceptible Iron Maiden’s sigil, changing tempos and really catchy rhythms. Good start, indeed, although this idyllic mood is impudently disturbed by the three next songs. In a wink I forget about mercy, thrashing drill licks the senses. But, wait, doesn’t “Zombie Love” sound familiarly? Of course it does, one of the best killers from the previous Ep emanates its ravager power, the bass attack from tenth second makes my muscles shrink, but… I miss the point, why has it been placed here? It does not take issue with “Encephalopathy” version, contrary to “Mr. Two-Face” taken from the first demo and re-recorded in a really killing way.

But guys, keep cool, I’m not going to complain anymore, I swear.

I promised myself not to anatomize the “Saints” content piece by piece, atom by atom. It’s my privilege to do it in more personal way, in privacy armed with head-phones. But verily I say unto you, there are maaaaany splendid moments worthy of building an altar and praying fervently at. The most important element that determines the final mark is variety. Not an accidental one, but served in a proper way, like a small meal that not fights with my peptics. And you should believe me, these 54 minutes runs really fast. I’ve got an impression that faster than time itself. So, does it make me younger? Like in Krzysztof Ibisz case? Who knows that? Yep, a paradox to be resolved by Mr. Hawking I guess. At last I deal with saints, you know… Phew, anyway, these “Saints” are rooted deeply in thrashing dimension, though if I have to compare it to “Encephalopathy”, they plaited more heavy metal dynamic s and impressive melody to the structures this time. Also, doomish monumental parts aren’t strange here (mighty, sense smashing “Fairyland”), or even hard rock touch here and there. All played easily, with no constraint. And when I was thinking over any possible comparisons, Danish artillery gave me a missile. Yes, Artillery! But, hold on, I do not treat Thermit as a cheaper equivalent of Stützer duo child. No, but consciously or not, thermitians follow the path of “By Inheritance” and later twenty-first century albums. Then, add memorable influences of the authors of “Somewhere in Time” or the best moments from “Ironbound” and, as the most important, Thermit’s own visions. Such a mix done in a really admirable method brings just a fresh music.

As for vocals lines performed by Trzeszcz, it seems that everybody praises his doings and I won’t be an exception here. For sure he belongs to best Polish vocalists, showing big balls all the time, mixing such famous persons like Blitz, Flemming Rönsdorf and Brian Johnson. I cannot write he tries to copy anyone of them, because it would be a blatant lie. With no problem he modulates his voice from main veneniferous timbre to more calm and peaceful or to even brutal forms (“Smoke & Soot”). His vocal manufacture woks in full swing, tirelessly. But, did anyone ask about instrumental side of “Saints”? Gosh, nothing but an applause! In a nutshell, the musicians simply arouses my sincere admiration, their highly developed skills let them create such fantastic compositions. No time for a gasp, as the guitarists bomb the field with great riffs, serving bunches of both complex and more melodic leads in the tracks. There’re whiles for madness, there’re whiles for temporary serenity as well, with such memorable parts blazing in “Smoke & Soot”, “The Last Meal of the King” (especially with this crusher exploding at 3:50), “Louise” or “Mr. Two-Face” (an absolute change of emotions at 1:42). Rhythm section? Present! I have an impression that bass guitar performs fifty-four-minute lead, leaving me just speechless. Perfectly executed and supported by no-idlering drums. And to the best of my knowledge, Błażej doesn’t listen to metal music at all, hope he gives some spins of “Saints” at times, and says ‘brawo my’…

In quality means, “Saints” deliver an equal stuff. That makes impossible to choose the leader in the squad, even after hundred meetings. I wrote about a small revolution in the first track, but the terremote comes with the fifth song called “The Story About Bird & Snake”. The shortest one, but the only instrumental in the family, being a real Fabian’s show. At first I demurred placing such a song in the middle, it often causes needless unbalancing, but finally it worked. I don’t know the concept behind it, but the track became one of the gloomiest metal pieces I have ever faced with, personally I think it’d be a proper soundtrack for Kleki-petra death… Impressive, indeed. Then, it goes into “Fairyland”, over eight-minute beast, with clear doom fascination. Begun by Fabian devastating tool, the first half is really slow, mysterious, showing completely new vacant lot in Thermit kingdom, later it gets faster pace, but I wouldn’t dare to name it Pendolino, rather as a freight train with fifty four fully laden carriages. Broken bones & tissues guaranteed. “Smoke & Soot” is made of similar means, it sounds like a seeming calm after “Perfect Plan” detonation. The truth is the song, even not with overspeed included, turns probably into the most brutal and ruthless face of the Saints, giving an instrumental banquet during the second half of it. The band’s style is obvious during the album, yet I didn’t find any small notice about being… technical in the general genre insight. I bring it rather bashfully, maybe I need an earpick immediately, but take a fast listen to torrential “Perfect Plan”. Or “The Last Meal of the King”. What’s more, such a place-kicker opening twisted part of the title ending song, what a musical abattoir! Saints offer great end, using some keyboards part and acoustics, forcing me to push the button play again. Really, it’s easy to fish up all the broken bass parts, complex riffs in songs I mentioned above, yet it flows smoothly through the brain cells being just an added value, not an instrumental bloodless self-abuse.
Mind you, Saints didn’t blow me away on the spot and I needed many careful spins to view it fairly. When the time was right, I felt something on my face. Like an… Old Shatterhand’s fist. Got it? I don’t know exactly why (even after promising Ep), but I didn’t expect such good music and the final impression has been strengthen thereby. It’s not a sudden mental blackout, Thermit is one of the most promising bands that have been established this century. They courageously use purely classic forms based on well-known bettermost patterns, not being involved in modern post/sludge/drone/cyber/core/depressive/whatever genres. In such a way, they proved there is always something to offer if you can, there are mechanisms that let the musicians convert something once intended to their own ideas. I repeat: if you can. Thermit can. Their hometown should be proud of: Turbo, Wolf Spider, Acid Drinkers and now another team joins the trinity. Yep, concerning their Poznań, and all the football issues attacking us from every corner now, end of seasons in many countries, the final matches of Champions League and European League, Euro 2016 in France soon. Well, it’s scarcely possible not to mention the fact I have to compare Thermit to a team from Bułgarska street. And you know what? Keeping the “Saints” quality, Lech should be in semifinal of Champions League at least. Do you feel it? Can you see the difference? If don’t, give them a chance.   Do I become a Thermit psychofan? No, absolutely no! Just wanna support fine music. And to put it briefly on the end, with “NAPIERDALAAĆ” credo, the band managed to deliver fantastic slab where metal, passion, concept and skills to shape the music itself amalgamate in one breathing harmony. One can say, all these words are hackneyed phrases used many times while describing records. I know that perfectly. But who cares, I’d like to ask? Saints burn everything on the way, and there is nothing but a soot.

… and who put this such a good asphalt way in Texas?