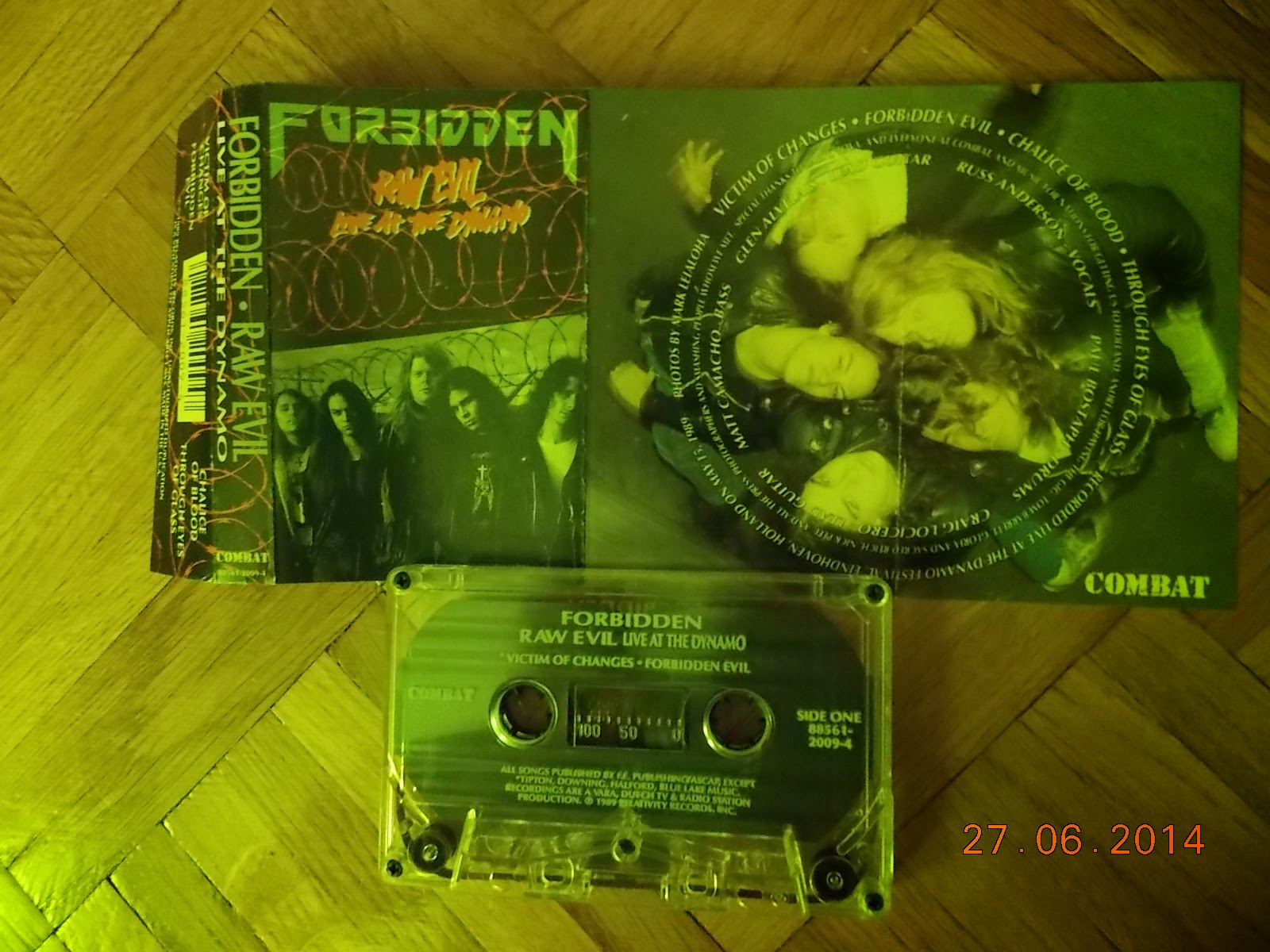 It’s pretty funny, but I found this item between pop and rock ‘masterpieces’ in one of the biggest shop in Poznan during my studies. Now it is not important who put it there, the most important is that “Raw Evil: Live at the Dynamo” joined my Forbidden tape collection, however this title is very special: it is the only original one and the only one which survived these all years of listening to. What is more, it still looks and sounds (!) perfect. The title saw the light of the day after the European tour of the band, just after releasing skull crushing debut album “Forbidden Evil”. The similar thing as compared to Testament and their live tracks recorded in Eindhoven in 1987. Here I deal with four song tape Ep that clocks in 26 minutes and shows top form of the band, although the first song is pretty strange to me: “Victim of Changes” by Judas Priest. This song coming from “Sad Wings of Destiny” is a good stuff on the end, but as the opener? No, it doesn’t convince me! Fortunately Forbidden’s interpretation is really brilliant, the song got another better life. I have to mention great vocal lines of Russ Anderson too, he shows enormous talent…

…but at the end of this song he shouts “…see you next time!”. Mind you, it’s a first song here. What is more, there is no continuity, as the songs are divided by man-made tunes of silence. All seems to be haphazard. For all that, this tape is truly valuable, still we cannot find any full-length live recording in band’s discography, so… better a bare foot that none. Anyway, beside the cover song, these five Americans serve absolutely three splendid thrash killers: “Forbidden Evil”, “Chalice of Blood” and “Through Eyes of Glass” unleash its slashing power without any mercy. And to sum this short unique tape up: pure devastating thrash that I still listen to it with delight. No more is needed.

And only one thing is unpleasant: the band, after releasing “Omega Wave” album, is on hold… Again. 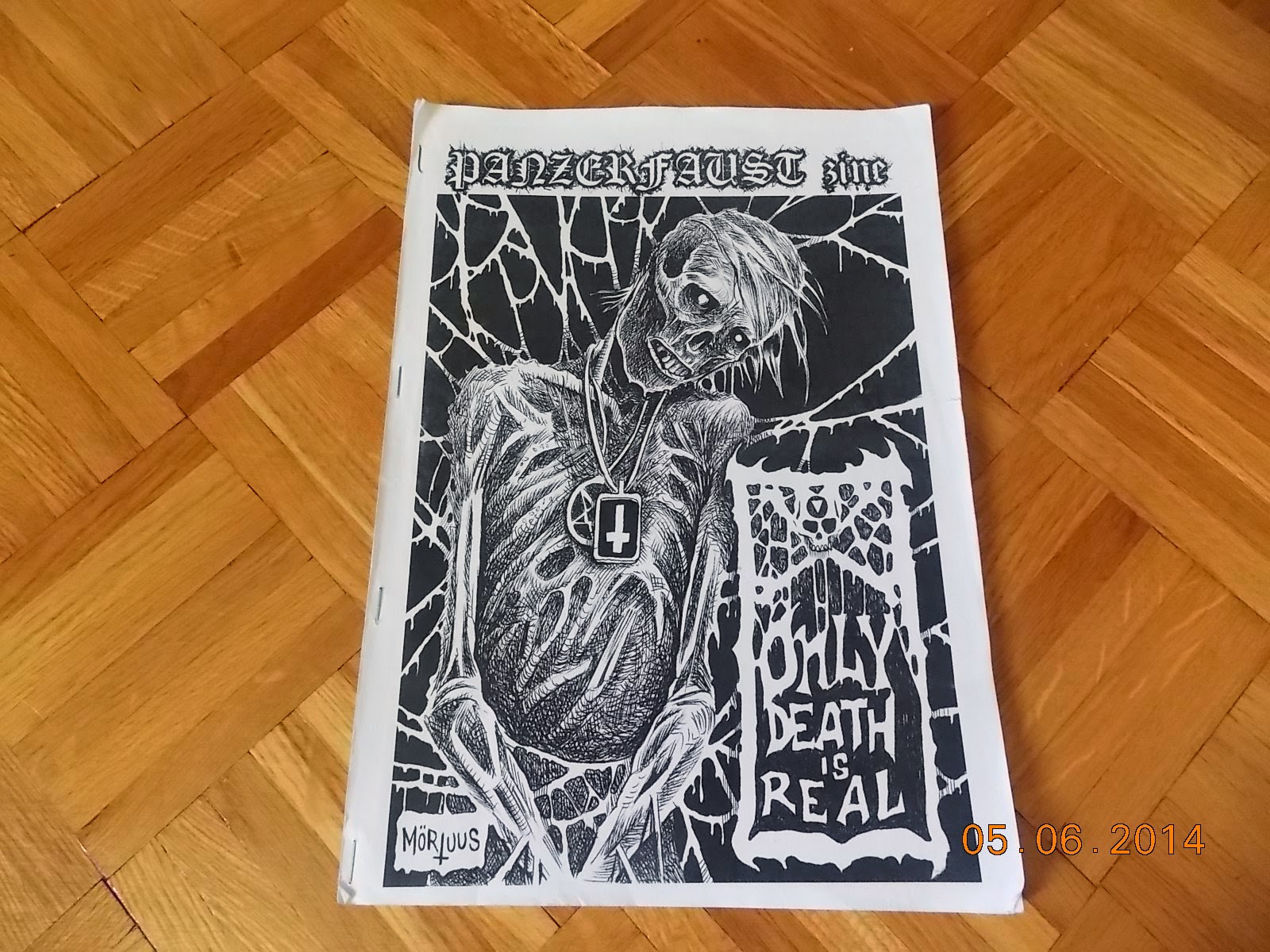 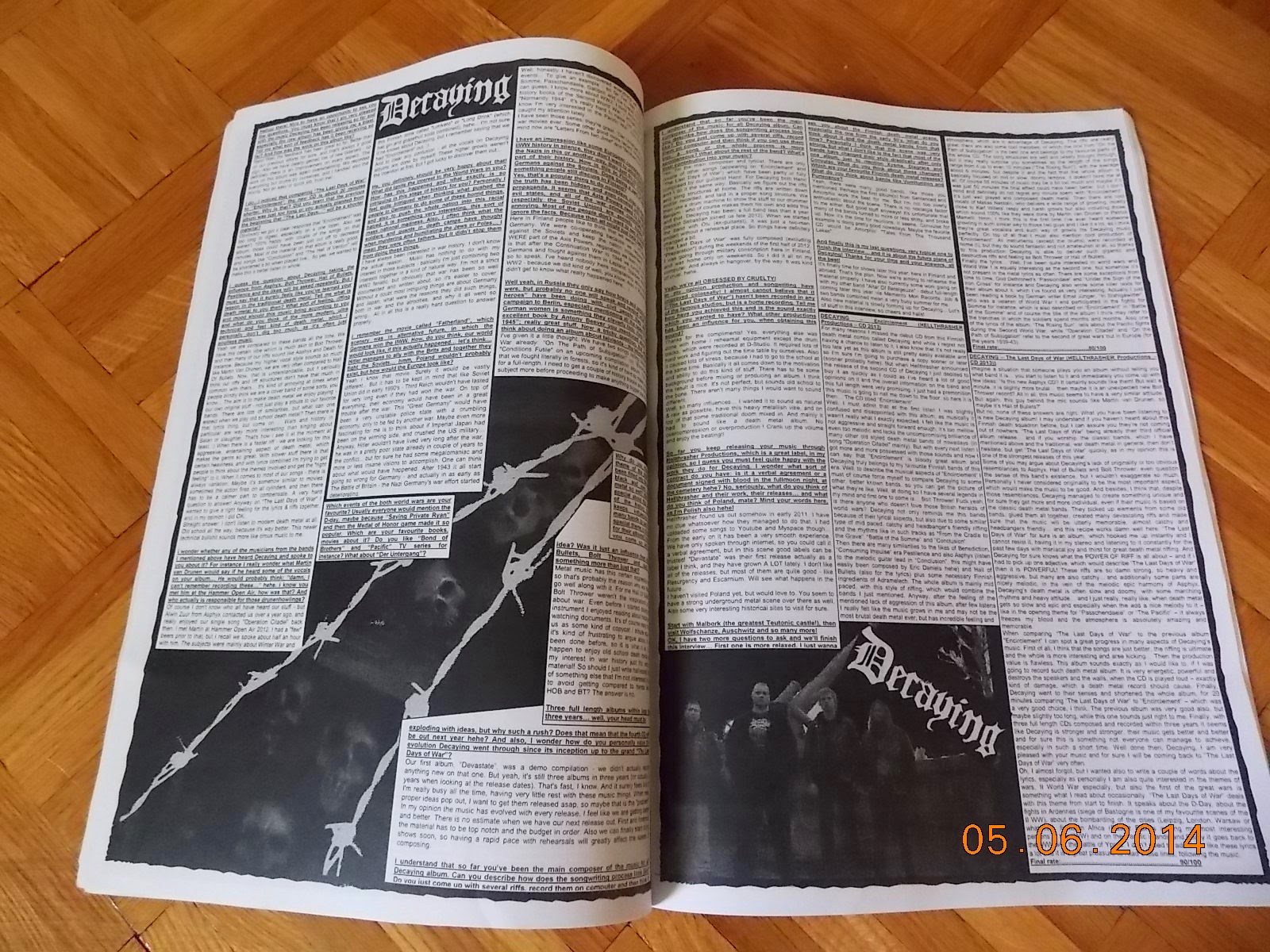 First of all, it’s a really great idea that Marcin, the chief editor, decided to spread these deathly words through the resurrected Panzerfaust paper zine. I repeat: PAPER, as he is known for running the blog under the same moniker and providing his reviews on Encyclopaedia Metallum page. The amount of over 500 pieces looks really impressive. And it seems it has no end! That’s good, but the better thing is I can write about something real, something tangible right now. As it was clearly stated at the beginning, 90% is taken from the blog however it is not an obstacle for me. As a matter of fact, I know several chats and the best part of reviews, but I have it in the zine, in the place where it always should be! What is more, my eyes have breathed again seeing black font on the white paper at last! Yes, it’s a way better as compared to the blog with the inverse situation.

Catching a glimpse on the front page and the words on it, one thing definitely should be sure as shooting: death metal to the bone! Yeah, reading band’s names I knew it would fit my tastes perfectly. And amongst all the chats maintained rather in in-depth manner, the interview with Matt Barnes of Chaos Inception is the best one here. He provided very, very interesting answers concerning musician’s life, metal in general and metal celebrities (just take a careful read the penultimate question/answer). What’s next? For sure Decaying (after reading a review of their latest “The Last Days of War” album written by Marcin on metal archives, I bought it immediately and I’m… truly impressed!), Scent of Flesh, Eternal Rot, Beyond Mortal Dreams to name a few. Marcin uses his English in kindly and completely understandable way, yet the questions are well-thought-out and he knows what he is asking for. Simply he listens to the all these crews. And only one interview is a kind of editor’s failure. I mean, Turkish Engulfed placed as the last one really surprised me in a negative way. You know, questions are longer than the poor answers, it made a boring stuff unfortunately. And one can ask: you are such a known band and don’t need a support? If yes, I can understand. It’s pity because Turkish bands aren’t something common in underground press.

The modest layout looks really cool, but there’s more important thing: Marcin added 82 reviews of music and 1 review of zine only, however it took him one whole page. He described pretty in detail the Chilean beast called Compilation of Death #2. Man, I didn’t even know if such a book (more than 200 pages, divided into two separate parts) exists! To put it short: I have to buy it. About music, there are two sections, one consisting of short vinyl releases (EPs, 7”) and the second part, much larger, with the rest of the stuff. Generally I can find only pure underground, no any mainstream names, with only one release with maximum mark (Trench Rot’s demo “Dragged Down to Hell”). And here I definitely prefer when Marcin describes the music carefully and with even some historical touch. I like the way he writes, as he knows a lot about the underground. Passion, devotion, knowledge, metal, all these elements are easy to be found in the pages of Panzerfaust.

Any complaints? For sure it wasn’t planned putting some repetitions (two reviews in vinyl section, or one question in Beyond Mortal Dreams interview). Also, I don’t consider lack of zines reviews as a serious defect, for sure it would be more interesting to read. The second thing: it’s a pity Marcin didn’t put descriptions of old classic albums in separate part like he did it for metal archives. “Beneath the Remains”, “Left Hand Path”, “Show No Mercy”, Bathory or Asphyx lps and so forth. It would be definitely another strong point of Panzerfaust. I don’t care if such albums are known by heart by metallers, but reading about timeless and immortal stuff is always something magic as far as I am concerned. I hope to see it in the next issue. Maybe whole Dismember’s discography? Anyway, if I am writing about possible next Marcin’s attack, one thing is sure: we, all the readers, won’t read a chat with… Kataklysm. Ha, I got to know Marcin’s opinion about the Canadians, but reading some words on the bygone “The Mystical Gate of Reincarnation”, “Sorcery” and “Temple of Knowledge” splendid times should be exciting, don’t you think? And one more band comes to my mind after the Panzerfaust shot, namely Paracoccidioidomicosisproctitissarcomucosis. If I remember well, this name of Mexican sickos can be found two times on the pages, so maybe it is a good idea to contact them to make some intie? However they seem not be a band from favorite editor’s genre…

To cut it short: I had many pleasant moments while studying the content of Panzerfaust work. I have missed its previous issues somehow, but I will buy the next one for sure. And when I think over the Polish underground press, I find these months a very good period as so many killing titles walks around: R’Lyeh on December, then the resurrection of Infernal Death and the next Necroscope and now Panzerfaust joins the team. Dealing with this Marcin’s armoured offer, I state to all of you that it wasn’t a waste of time, moreover this vinyl maniac seems to be a shepherd amongst the flood of new countless exhalements of the underground scene. Thus if you don’t feel like an orphan, follow this guy. You won’t be disappointed.

Posted by Pawel Przybyl at 9:56 PM No comments: