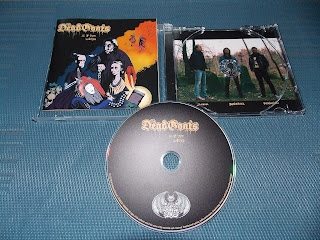 Does 1692 say anything to anybody? If not, let me explain it, as this number became a key factor of the second The Dead Goats album and it directly refers to Salem’s Gallows Hill and infamous witch-hunt that took place in that insane year, although the whole lyrical content of “All of Them Witches” doesn’t deal with this case only and all those who claim it’s about female representatives of Polish Seym are just wrong.  But one can ask, is there a need to record another metal album with such a topic? Bloody hell, YES! Especially in a way The Dead Goats did it.

All right, I didn’t expect anything new from them. I know what this band is all about since their beginning and the album gives me that, however if the production element is concerned, I have to admit it appeared with more dirt, roughness and filth to date. So, another Rubicon has been transcended. Musically I found less Sweden influences, I mean, less those obvious Swedish influences and there is no chance to hear such a song like “Children of the Fungus”. But for sure, the album has genetic code from Left Hand Path album, luckily ceaseless musical mutation determining creation of new forms of amino acids doesn’t let on naming it a pure copy of Swedish inventors. With some alleys trodden on American nineties soil and definitely with an own vision how to shape and execute the music, “All of Them Witches” belongs to one of the best releases that have been spat in 2016. My first impression was: speed rules the land of the witches and is a determinant of the sound avalanche. The album starts off with gorgeous short intro turning out into title track which is probably one of the best in goatish family: maniacal tempos, senses breaking slow-downs in the middle and on the end, ripping screams and it clocks in over seven minutes. In a very similar method of devastation, “The Gloom That Came to Salem” has been served as well. And believe me, this part played after 4:30 should be a pretext to give them honorary citizenship of the city of Salem. Yeah, simply great, just a visiting card of the band.

Well, I’m loaded as hell by this killing duo, yet I cannot be indifferent to the remainder. I wrote about the speed, but only “Broodmother” is maintained with it only. Paces are mixed, but it doesn’t disturb to absorb the music. For sure “The Curse of Gallows Hill” has plenty of melodic layers, with varied vocal lines, definitely it will be a crusher during the gigs. In turn, “Of Darkness and Decay” the most brutal I guess, has two absolutely perfect moments, with musical madness after 1:55 and 3:28 when doom in deathly grasp enters the stage. Or take a listen to the ending part of “Into the Fiery Grave”. Less catchiness, more heaviness, that’s how it works here and I just need more such doom-marked tunes in future, guys. Then, “Dwarves in My Coffin” (I do hope, this horrific vision won’t be true after my death…), in spite of such words like pleasure to kill, from beyond the grave or six feet under, is yet another highlight praising Entombed early works and the likes. In turn “Conquering the Worm” has short similar part (after 1:50) to song “Gallows Humor” by Misery Index, however it sounds really interesting and fits in with the whole. Thus, did I find here any failure or weak moment? For sure I am forced to call “Broodmother” track once again, not because of its hectic tempo, but some too melodic parts which are more useful rather for Gothenburg offer. I don’t think it is a serious scratch to the whole, but still I can’t be accustomed to it…

I was one of very few who had an occasion to listen to this album before a world (I hope) premiere. And now I am one of many praising “All of Them Witches” all day and night long. The band explores well-known tight metal dimension, but the most important is that they are able to add something interesting and promising to the formula. In moderation they use movie samples or keyboard touches. Despite of participating in many splits which I liked a lot, musicians are really productive delivering another portion of highlights. And I hope to get another split this year, but on the other hand, I keep my fingers crossed, as in July the band witnessed the rainy gloom that came to their rehearsal room. Guys, be safety-first, it seems the revengeful spirit of John Hathorne is watching you, as you dared to speak for Sarah Good and others wrongly judged…