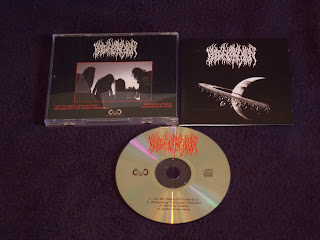 The Black Space, Our Only Almighty

Blood Incantation is yet another band in my listener's career which discography I met inconsecutively. The first sounds of these Denver based madmen stroke my senses under the „Starspawn” name and demolished me completely. Well, it was just a coincidence, I wanted to buy their stuff and the debut landed on my desk firstly. So it was pretty sure for me that this reviewed Ep, somberly called „Interdimensional Extinction”, would be the title for my collection eventually. Of course, if I hadn't had opportunity to meet their 2016 debut, I would have gotten my attention to it, no two ways about it. Why? Because no one can miss its front cover, the Bruce Pennington artwork from 1973, a true eyesnare. It is absolutely stunning: by using only two basic colors, he managed to depict the most ominous thing for every human being – the Black Space, where we are but just nothing...

Before writing about the musical content, it's worth to glance at the logo as well, a proper thing for depressive black or any goregrind slamming crew. But no, not a bit of it, Blood Incantation is just pure death metal act. And what's more, the band seems to be one of the brightest stars on the metal firmament. Their merely eighteen minutes first serious title is a cosmic journey: fascinating yet frightening to the bone, with no signs of accidentality (sometimes rather as controlled chaos). As for production side, the sounds are fresh and organic despite completely digital form, it supports the music which has been given in awesome shape. Fore sure, killing fretless bass parts played by Damon Good as a session musician are really worth checking out closely! And if I had to play in musical comparisons or parallels, I would enumerate debut album of Demilich on the first place I guess, maybe with a bit of Nocturnus from „The Key” era, however without that huge amount of Louis Panzer works. These mentioned bands are one thing, but in my opinion the Americans play in the same masterful league like Mexicans from worshipped The Chasm. However their deathly visions are different, but with the final impressions to be pretty much similar.

The whole is really varied, where many fine ideas have got its right place. There is even a room for clean vocals and Moog section. And despite drowning in technical display, being broken and turbulent, this Ep is very easy to swallow in full. Then the cosmic energy (as the booklet precisely says: cosmic echoes to the underground) enslaves the flesh and the soul. Seemingly Blood Incantation doesn't try to be the fastest band in the universe and rather mid tempo prevail, yet some outbreaks of rampant speed are present as well. With old-schoolish-driven crushing riffs, quite melodius leads, acoustic parts in „Obfuscating the Linear Threshold”, atmospheric opening in „Hovering Lifeless” or horror-like ending in the last one, the puzzle becomes to be just another great title on my shelf. And after many meetings with it, still I cannot write which track is the best one. It proves the stuff is quality equal, since the very first seconds to the end of „Subterranean Aeon” - my senses ride through the galaxies, black holes, stargates, beyond the light, beyond human life form, beyond the known universe... with only the Black Space as a comate. But this is not the end of the endless journey, as „Starspawn” is going to visit the Tulum Codex pages very, very soon... 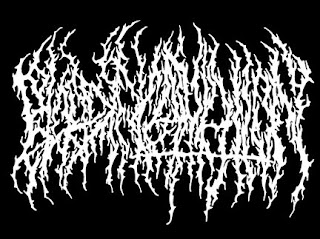 Posted by Pawel Przybyl at 12:20 PM No comments: