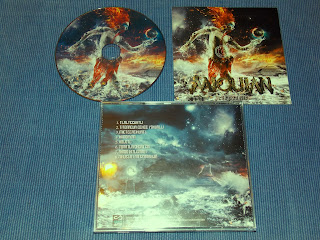 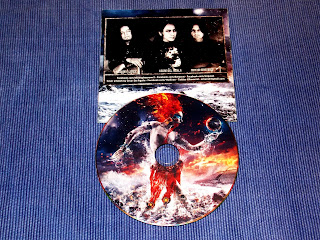 Never trust first youtube impressions! Now, I do not remember which track tried to conquer my mind, yet I collected too many keyboards sounds only. However, for obvious reasons, I liked the stuff because of front-cover. Even if I’m pretty experienced listener and reviewer (?!), I’ve been forced to give it a chance. This is the first thing, the latter is the person of Martin Martinez which is responsible for many fascinating death metal deeds. So I patiently waited for physical cd version, as always, not being a down-loading vulture. Yes, Miquian is the band that doesn’t want the GREAT past of Mexico to be forgotten and mentioned picture done by vocalist César is the first gate to the indigenous cultures, mythologies and folks. It’s very brave and complex in this form, I must admit.

As the metal style is concerned, progressive power is the key, their site gives an adjective ‘epic’ as well. And if you think about such progressive bands like Symphony X, Elegy or Fates Warning, then you’re all wrong. If you think about for example Finnish offers which I really do not like (Stratovarius, Sonata Arctica), then it’s another missing bullet. Trying to give a proper description on how this band sounds, Eternity’s End comes to me. Not only because of Germany based crew and Mexicans are kind of musical project, but I can feel the same way to execute such power genre. Even César manner is similar to Ian Perry and with my vivid imagination, Ronnie Dio has a big impact on what is César doing here. Aside from clean parts, there are fragments when he uses more aggressive forms (“Mictecacihuatl”, “Xolotl”, the ending part of last “Nihueliti Nitepanahuia”). But these seven songs (fourth track “Ximoayan” is a short intro) aren’t a monolith unfortunately. It sounded pretty seriously, but be cool, only one of them seems to be a worse kind and cannot convince me. In “Tonatlapixcatzin”, except interesting guitar leads, there’s almost nothing worth the trouble, riffs and keyboards are served in predictable and definitely too standard way, bringing the spirit of Stratovarius or even awful power sighs known from Children of Bodom. Then, production should be more POWERful (to show the power of riffs, guys!). The keyboards have been recorded as a main instrument and they take a leading force in the storm of sounds. It means, the rest of crew (vocals and other instruments) should be louder in a final mix. Not a good start for this trio, luckily, the rest is just a really good stuff that makes I often listen to it.

Musicians don’t try to complicate the whole, don’t break the structures, sounds are with easy flow through all these forty minutes. The key is just to give me catchy and memorable song. And they did it, I confirm. In addition, each song contains of folk pre-hispanic instrumental parts (different types of rattles, reed flutes, huehuetl and drums) played by Martin. Well, I can say, nothing new for anybody who knows the creativity of this man. Beyond the shadow of a doubt, it sounds perfect, yet it is the same as compared to the Xipe Totec discography. I’m far saying Miquian is a lighter (read: heavy power metal) form of this band, although such description shouldn’t be surprising here and there. But, if Xipe Totec has been mentioned, just take a listen to the ending part of “Ahmo Xitlemati” with splendid death riffs and frantic blasts. What a killing moment! Such fast fragments can be easily heard in “Mictecacihuatl” or “Xolotl” as well. But the basis here is just well written guitars and keyboards that cooperate and complement each another, giving the proper musical ideas. Then add Nahuatl lyrics, folk instruments and the main dish is ready to be consumed. What is interesting, each track has something special on the end, even “Tonatlapixcatzin”, calling my attention all the time. ‘Special’ = unexpected tempo changes, surprising riffs, interesting keyboard lines.

Well, summing the thing up – I’m a bit disappointed. Reading words above, it’s clear Miquian’s debut isn’t weak album. But! Naming it with one of the most fascinating myth taken from Mexica mythology, they had to realize there’s no place for failures and average offer. It means, they couldn’t record just a grey album. And, believe me, they did not! Although I still have an impression they were afraid of what their hearts could tell them while facing such great heritage of their ancestors. So, how is the future of this band? I do hope the last song “Nihueliti Nitepanahuia”, different a bit due to more complex instrumental touch and more progressive, is a kind of guide-point for musicians. Believing there’s something dormant in their minds, I await the second strike. I await not only because they’re sensation on power metal scene for the reasons I clearly pointed out, but I want to see another exploratory vision: with more creative courage, with more metal and Mexican madness. Such a genre gives them everything: just free your minds! 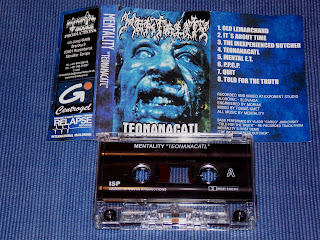 Teonanácatl’s name was the only reason I bought this tape many years ago. I knew nothing about the band, but as I’ve been Mexican enthusiast since the ages, my choice was quite obvious. And before writing anything on it, it’s necessary to explain the thing to have a full picture of what this mysterious word actually means. Well, the first its trace can be found in Historia general de las cosas de Nueva España written by a Franciscan friar Bernardino de Sahagún. And you may be surprised as Teonanácatl is just a mushroom commonly used in pre-Columbian times, but not a component of daily diet. Because of its strong psychedelic effects like states of euphoria, altered thinking process and spiritual experiences caused by two alkaloids psilocybin and psilocin, it was consumed during various celebrations and rites. And I say you, these Slovaks had something in common with all the stuff, because their musical offer isn’t… normal.

It’s… fucking brutal, sick and bizarre. And definitely it is not easy to handle with, you know, death / grind with keyboards but not casual or fleeting in the storm of sounds, being not only an interesting junctor between the songs, but something really important with an inscription “I Am Chaos” on the forehead heaps of times. A bit of Grief of Emerald from the debut, but Slovaks are more brutal, a bit of Pan.Thy.Monium, but Slovaks haven’t got this touch of genius. Although I prefer music without it, I’m not a main enemy of keyboards in metal, and got used to it very quickly. Yep, I started with this instrument, but don’t be afraid, there are guitars and drums as well, being the main basis of extreme musical show. Good production helped to succeed, however drums, as opposed to the grinding parts of bass, should be more taken care of. For sure, this kind of guitar sound realization reminds me of Swedish Pan.Thy.Monium once again and like their famous madmen, they try to complicate the sounds all the time juggling the tempo and delivering queer ideas. But expect neither pulp nor boondoggle, as initiative chaos becomes just well-thought-out mature portion of killing music. Also it’s rather easy to find in the guitar structures references to Dying Fetus especially in “The Inexperienced Butcher” and “P.P.C.P.” or general pure Napalm Death brutality, yet such riffs modeling and insane rhythm section push the band to some kind of original dimension.

But! The opening moments aren’t easy for death / grind freak-outs as the intro for “Old Lemarchand” is a proper stuff for gothic or melodic doom band, bringing beautiful memorable tunes. This idyll doesn’t last forever and Mentality strikes the senses with drums cannonade and animal-like vocals after tens seconds. Definitely Vlado spits his lungs out in varied forms of gutturals and high-pitched screams combinations. As a band buried many years ago, this material is still a proof of own musicians vision and never gets old. The music, it still kicks my ass without mercy with its eight equal recognizable frantic compositions. Each listen delivers different states of mind (yes, psilocybin!), there is always something new to face with and I am not writing about table-tennis tunes between two last songs, some Chinese intercalation (“It’s About Time”) or crushing “Mental E.T.” when band doesn’t want to show any speed-ups wittingly holding listener in doom smashing trap. All right, need to sum it up: strange at first meeting, still strange and very good afterwards. Courageous and mature. Overvaliant and storm-bringing. Sometimes simple, but mostly broken and crazy. So that’s the Teonanácatl dominion. Interesting should be one fact that I started to meet this stuff during my vacation pharmaceutical practice in provincial psychiatric hospital in my mother town. Hm…

Well, Slovak underground is very poor in my collection, this tape is the only one I have been worshipping since the first sudden hit. What’s more, while asked in the night, Martin Vaculik and Marek Hamšík are not my first choices when it comes to Slovakia land. Hope you know why!

Posted by Pawel Przybyl at 8:23 PM No comments: