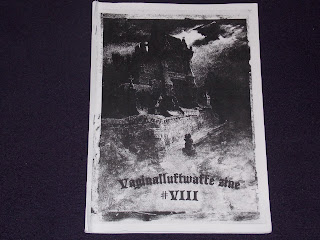 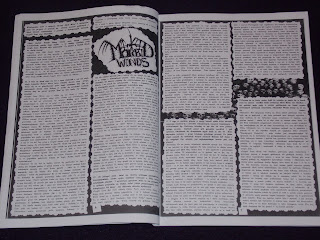 I did not go wrong this time and purchased the recent, still hot issue with the number eight immediately after hitting the bowels of the underground. As for size, layout and such stuff I could copy and paste my previous VGL reviews. It's been released in the same form, it does not really develop anymore and... I do not need any changes. The front cover greets with a dark, obscure picture and on the start I have another three bands that screwed up and didn't answer. Really strange as all are on Polish Fallen Temple roster. Pawel cares for wood resources and there's no single place left empty, just take a look on page number 4, as he put one review under Martwa Aura chat. Ok, let's go the content: the eight consists of eight interviews, but let me describe the weakest ones for starters. Hyperdontia, despite having quite huge impact here and there, completely failed. Pawel explained the case in words of introduction preparing pretty much interesting questions, but in the end I got terrible answers and two of them without any words of explanations. What's more, there are many editor's necessary footnotes which isn't a standard thing for VGL. The contest on the biggest lame of the issue is finally settled. In turn, Sathanas gave a shedload of laconic answers shorter than questions making this intie average and totally forgettable. All right, I guess all my whinings are over, because the rest is pretty decent, good (Martwa Aura that opens, Vacant Body – the shortest with only ten questions yet definitely concise, Gravewards, very interesting with ten questions as well, unfortunately it ends too abruptly) or just very good. Polish Morbid Winds, new blackish beast, proudly opens the remaining trinity, giving fully informative friendly chat made in last April. There is no surprise here as Diabolizer (in alliance with Cryptic Lust), the band's drummer and Worship Him zine editor knows the subject perfectly. In similar way Elixir of Distress shines through pages, however I found it as a great complement to the interview from R'lyeh 15. And the third one lastly: Burial in the Woods led by modest Gerileme again with very interesting chat, definitely to check it out. The answer on question two has got a funny (or not, it depends...) typo though.

As compared to 7, the font has been changed into smaller size, however still being readable and not causing an eye pain. The old sin with midsentence capitalized 'and' conjuction didn't disappear, there are some spelling mistakes as well. Due to reduced amount of pages, the review section offers 20 zines (in the case of this zine, I even would write only 20...) and 135 musical different formats written with using the same rules as always. Flabbergastingly, this time the Chilean ungerdround isn't the leading force. The live reports are present too (7 described visits). Then, the page 2 features nice science and history section – good move, clever and interesting treat, especially when it comes to the person of Herodot. So, allow me to capsule this issue: VGL doesn't disappoint providing a few hours of pure hellish underground reading once again. I expected solid stuff from experienced editor, and I got such. And for sure, questions on non-musical topics (for instance, ecology, Earth's overpopulation, historical facts, burials) are an added value. Fully recommended, no two ways about it. 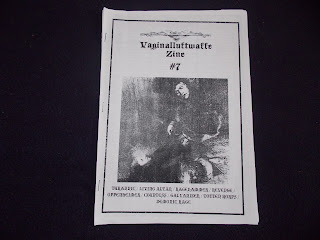 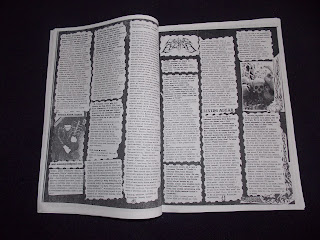 Despite quite positive review of the previous issue 6 from 2014, somehow I missed number 7. And you know what? Nothing rather has been changed: still I deal with old-school layout and cut'n'paste method of execution. The reading itself goes definitely smoothly, the font is my friend, not an eye-burner. I wrote 'rather', because it has got slighlty better cover art and the interviews are preceded by some short intro: one or two sentences and the subject is clear. Pawel, the editor, admits once again that the process of zine creating isn't an easy ride. It's very hard to argue with that, and I'm fully excited another title hit my modest collection. Ok, as the bands are concerned, there're nine crews in the menu, what's interesting, only two of them come from Poland. Ragehammer opens the thing up and this is killer, to put it briefly. Friendly, with easy flow talk, but Tymek's attitude is not an exemption in any form. Then, the Finnish Galvanizer gives me an interesting meeting supported by surprising sense of humor. It's a shame, but this is still unknown for me during the review, but for sure this VGL issue made me to act. The third one on the list is Living Altar coming from Lithuania and... we have got the winner. Dainius, the drummer, is an astrophysicist and Pawel knowing that fact, led the interview in a really splendid and absolutely interesting way. Very good questions, very good answers (and one pretty shocking for black metal die-hards on Archgoat lyrics). Two next nice causeries with Demonic Rage and Totten Korps, the representatives of Chilean hell, give some exotic and nonexpendable aura to the whole. What do I need more? But at the other end of the spectrum I'd place Oppenheimer which is a typical black metal yarn that brings nothing new to the matter. In turn, Revenge wishing for humanity to be annihilated in nuclear holocaust (believe me, the Earth itself will be faster), turns into load of nonsense with its acme in the fourteen answer...

To sum the issue up, I didn't notice any signs of professional burnout or loss of form. Some nice additions from daily press, culinary guidance how to prepare human flesh to eat and the crossword brighten the serious reading time. No needless questions, no commercial sections, but still with this strange typo using 'and' as capitalized conjunction. As for the review part, it's enormous and overwhelming. This time I got 48 zine (rather more complex) and 141 musical opinions with names I have never heard about, for South-East Asia hunters one comes from Brunei. Served precisely and to the core, it's easy to detect editor's taste, yet I have an impression that this part of VGL has been patronized by Chilean government as many of them praise the stuff from this country. But truth be told, I cannot remind now any weak Chilean recording or review. Then, Pawel didn't forget about live visits and gave six reports written in simple but truly enjoyable way. So, on a final note, the pages assure an underground atmosphere all the time created by experienced zinewriter and a complete metal freak, so there's only one thing to do: support his doings. 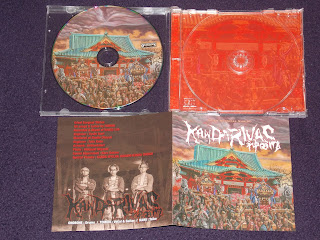 A big surprise coming straight from the land of Japan. The Ep is fourteen minute of... experimental grindcore as the band comes with some help on their sites. And to put briefly, it's almost impossible to dispute with such a fact. Led by Tomoki armed with guitar and different kinds of vo-kills, they use two drums, the standard drum set demolished by Onobone and taiko (or wadaiko) played by Kaiki. And this third instrument I consider to be experimental for sure, as I have never heard anything like that in such a genre. The main question occurring to me is: do they fit to the whole?

But from the start, these minutes runs extremely fast, the tracks differ in length, from „G.S.A.” song lasting fifteen seconds only (and the only one that falls under one minute) to broken a bit and more complex, if I can say so, „Fuminijire” which is almost three-minute monster. Of course, as mentioned above, it is kept simple and directly to the (grind)core, yet for the Japaneses the light velocity pace isn't the main guideline. What's more, I have an impression that slower parts dominate, just listen to this absolutely crude roadroller-like „Hakikudashi”. Even in the shortest one there is a small room for breather. The production-wise has got a clear underground flavour, guitars are sharp and rough, however taiko sometimes lose its place in the final mix. And those traditional taiko are present all the time, giving its first breath on the very beginning, and for sure being just good and very interesting addition. By using it, the stuff gets archeological (yep, it sounds strange, but the first usage in Japan has been dated on the sixth century C.E.) and tribal touch definitely, and even mysterious, as the origin of taiko is still unclear. Anyway, including Kaiki to the line-up is really bold and great idea that works without any hindrance.

The music itself is pretty varied. Some parts are just a highlight for headbanging, other do a complete sonic havoc where there's no place for escape. All balanced and despite some chaotic layers, well-thought-out and executed with precision. Musically speaking, I would be prone to place them somewhere in Takafumi Matsubara dimensions with the best example in „Fuminijire” (really good to be a track for „Longhena” album) or „Dissemination”, being a proper thing for his last solo title. Of course, I cannot forget about the vocals, they are delivered by each of them, throat grunts, agonizing screams, yells, shrieks, and some kind of chanting („Dissemination”, „Kobudo”), so I tell you, all the vocal bands madness included. Concluding, there is a vision, there is an idea. This is sick and organsmashing. This is different as well, not only in musical terms, just look at them.

Posted by Pawel Przybyl at 8:32 PM No comments: