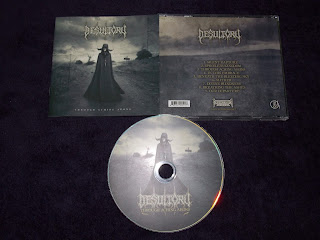 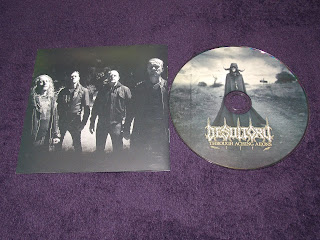 You know, their previous album „Counting Our Scars” was something spectacular bringing lethal sounds after many years of dry spell. Still having in mind the terrible number three, I am somewhere in the middle, torn between joy with a new title at last and unimaginable regret, because 2017 year seems to be most significant date in their career being just the last one as they announced it seriously. With such an attitude towards these forty-four minutes I proceed to face the thing. And to put it briefly, they didn't fail. If the front cover isn't a strong point right now, the production from Necromorbus depths is a highlight here, but as compared to the predecessor it got rawer sound with more readable bass lines. The first song couldn't be better way to open the album up: „Silent Rapture” confirms extremely good condition of Swedes even though seven long years have passed since I was counting my scars. Using the same methods of execution, musicians delivered me fantastic death metal once again. Although it is natural follow-up of the number four, the Swedes put emphasis on simplicity describing it in one word. The album is way faster, and such paces dominate. At first spins mentioned speedy marks were the first thing that made my senses open wide and even they do not play technical stuff, I needed many careful meetings to know what the album is all about. Anyway, there is no song similar to „The Moment Is Gone”, yet everything the band is known for, is served here in killing proportions.

As the whole „Through Aching Aeons” is incredibly equal, I cannot choose the leader. And I really don't want to do it, I just absorb the music from the first to the last second. That's the way it works fully and I always try to listen in such a way, completely absent to reality. Like their classic titles. again nine songs that left me speechless, no matter if I listen to the simplest vulcanoes of all-consuming energy in „Spineless Kingdom”, „In This Embrace” and „Slither” or songs containing absolutely splendid layers of catchiness in the opener, title track or „Beneath the Bleeding Sky”. In this dish, the band managed to stick compelling parts of acoustic guitars in „Beneath the Bleeding Sky” as well as desolation-bathed opening piano tunes in „Divine Blindness”, both as something new for them definitely. But giving all the tracklist isn't my purpose, each track is made of Desultory stamp and their musical madness I've admired breathless for so many years. And if both music and lyrics feature pervasive sadness, despair, woe or lack of hope, the last „Our Departure” merges all the feelings up, multiplies it and makes a speech to me that this is the inevitable end...

Waiting for this album seemed to have no final releasing date. Soon after distressing news appeared and somehow changed the way I felt this last band's work. In any case, Desultory left the scene excellently bringing me another fantastic title: with no weak moments, musical dullness, stagnation or copying the sounds once created. Every single while beams with genuine and passionate music created by mature musicians and their off the chain visions along the way. I fully understand the band says the final farewell to the scene in best possible way, just delivering the goods one more time, yet being at war with my thoughts I am now prone to write that „Through Aching Aeons” is kinda Pyrrhic victory. Even if every band will reach its end and put the instruments to the grave, it is too early for such a band Desultory is. Oversimplifying: extremely good music, many souls broken... Anyway, I don't wanna bawl my eyes out and pour my heart to anyone. Desultory has brilliant releases on its deathly trail, it has become one of the best musical forms since I've listened to the debut for the first time while deflowering pirated tape with wrong song order. The newest one is nothing but a real confirmation of their domination in my metal world. And still, our journey through those aching aeons has been lasting since 1993... into eternity!

Posted by Pawel Przybyl at 8:20 AM No comments: