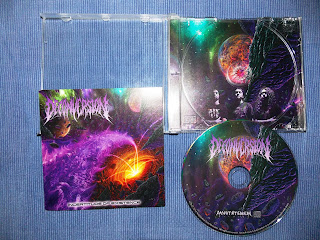 I’m not going to beat about the bush. This album is a huge surprise for me. Let’s see… Mexican band executing brutal technical death metal on Amputated Vein Records roster. Yes, really uncommon for the scene coming from this country. But musicians recorded only twenty minutes, however every single second has been used to fuel “Incertitude of Existence” machine avoiding intro / outro that artificially elongates the whole or redundant sounds in musical offer. Though it wasn’t love at first sight and I needed many careful spins before entering Deconversion visions of the universe eventually.

The production side helps. It is just a good work not being another overproduced piece of engineering madness. I got warm organic and pleasant (surely the right words in brutal death metal genre…) sounds, although musically Mexicans didn’t strive for originality. And it’s good they didn’t dare to put anything original to their concept. If the scene with such bands is quite big, my modest try for description “Deconversion is in the vein of…” goes to the German land and Necrophagist crew. Bashfully I put this record between “Onset of Putrefaction” and “Epitaph”. These two significant albums of the genre are some kind of determinant of the storm to come, yet the most important are two things: I couldn’t find Deconversion is a blind copycat of Suicmez band, the latter is that writing the constantly changing riffs and broken structures is NOT only the proof of their technical ability and talent. Yep, the music lives its own life, collecting all the elements into one harmony, that’s obviously an added value. From the other side, due to complex intensity, if I hope to hear a display of any theme, another one comes on the stage or just the song changes. Killing savings, dudes!

It’s hard to choose the best attack. This menu consisting of seven tracks with length between 2:13 and 3:41 is incredibly equal. Without hors d’oeuvre, without ice-cream bathed in whipped cream, only main course: pork chop, potatoes and sauerkraut with a glass of cold beer. Got it? This formula does not diverge from known standards. I got everything I need in this musical form: crude gutturals (mix of Suicmez and F. Mullen definitely), frantic pace and short crushing slow-downs, sometimes even catchy memorable riffs and demolishing rhythm section, and maybe I’d like to hear guitar leads to be more complex. But, when driving through the Deconversion system, I found such things like small touch of black metal tunes in guitar riffs during “Dawn of Hallucination”, broken rhythms in title track similar to “Ignominious & Pale” by mentioned Necrophagist or absolutely devastating vocals butchery in closing “A Trance of Deconversion” which I treat as the most broken song here… today, while writing this review. Because you know, “Inherit Suffering” bore the palm yesterday. I bet two days ago I had different candidate. So, as you see, things are running fast like in kaleidoscope making this album a really interesting thing, just a needful whop for genre’s supporters. For sure, there are many such bands in almost every corner of the world, it’s impossible to follow them all, yet I’m pretty lucky freak I was able to discover it: from riveting front cover and lyrics with no gore poetry to the disruptive portion of music. Surely “Incertitude of Existence” isn’t the best album with technical and brutal adjectives on the front, not a leader, although I can see potential and do believe the second album will be complete crusher. They say something is going to spawn soon…