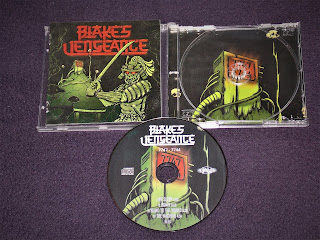 The debut of Milan based Blake's Vengeance has a similiar story to many titles in my collection. You know, in many cases, there is only one master: a lucky fortune. Knowing nothing about the band, first I saw it on Selfmadegod Records site last year, in new arrivals section. The front cover, bathed in green (remember, Overkill was absolutely first!), wasn't anything encouraging, yet I decided to give it a chance: one fast listen to the opening song and here is my cd version. Originally released as a digital demo in 2014 with different logo and cover art, then one year later on cd with changed logo, cover art and titled as „7747-7744” and the green reviewed copy, the last edition so far from 2016, this time under the wings of Polish Defense Records. And to put it briefly, the label should be awarded for such a neat and surprising move.

Surprising? No! The combination of two different numbers couldn't be omitted. This demo brings almost twenty minutes of music deeply rooted in thrash and heavy metal with definitely clear technical touch. Another recognizable element of this puzzle is clever using of melody, both in riffs and spectacular leads. But the very first thing that got my attention was the vocal lines of Davide and his manner reminding me Eric A.K from the eighties period. So, is it possible the famous singer has got younger brother somewhere in Lombardy? Of course no, it's not like that. Anyway, Davide's voice sounds great and really fresh for me.

Giving Flotsam and Jetsam vocalist's name as an example above doesn't refer only to it and has its own reflection in musical layer and some influences from Phoenix legend are audible. What's interesting, it seems the Italians know perfectly two first classic albums „Doomsday for the Deceiver” and „No Place for Disgrace”, yet I found references even to „High” from 1997, however demo hasn't got such fast paces, rather being maintained in moderate speed. Yes, there are short faster moments in the second half of the opener or in „Blind to the World”, but it isn't the key here. And as for heavy genre in general and pervasive catchiness, I would indicate the Iron Maiden shades. And such a bag of ideas is something really compelling. Lightness, facility, openness, with use of great skills where technique isn't a mindless display, make the stuff pretty accessible. And absolutely fantastic!

The production side is an added value as the whole sounds exquisitely. Hard to believe it's just a demo. And hard to choose the leading song. For sure, „Ronin” has a chorus that cannot leave my head and I often catch myself on singing it during my work. The longest one here, with splendid guitar leads lasting over one minute, there's even a room for drum solo. In turn, „Blind to the World” is like a semi-ballad due to its mysterious, eerie guitar parts, in some definitely strange way I could compare this track to the beloved „Escape from Within”. These twenty minutes run very smoothly, with not a single boring second, and I've got a real pleasure to listen to it, as I face the metal thing it should be played in such a way in this genre. Despite of mentioned bigger names, the demo sounds very fresh, vivid and quite... original. On the other hand I am a bit concerned as the band hasn't recorded anything since 2014. Yes, as opposed to the opening song title, they are still alive according to their social media and I do hope to hear something new in our current very hard times. All right, on the end, this music is yet another great evidence that using sounds once intended and played, there is always possibility to create very good music supported by own talent, skills and visions, not being locked down in the snares of soulless imitation. Believe me, Blake's Vengeance has got it all.

Posted by Pawel Przybyl at 1:44 PM No comments: 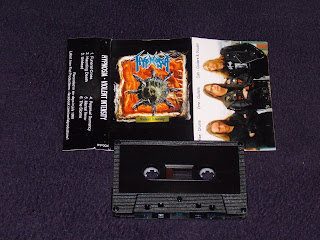 Being on my must-have thrashing list since the ages, the title joined my musical treasury last year eventually, and ya know, I bought it on tape just like my first own records thirty years ago. It was released by Iron Fist Productions in 2018 which is in fact the same label responsible for 1999 cd edition. And to put it briefly, the title doesn't lie and nobody can be wrong, as it brings violent intensity only. This seventeen minute Ep has something like a short guitar introduction called „Funeral Cross”, turning smoothly into „Hauting Death”. Almost four minutes and all is clear: the band delivers furious piece of thrashing whipping, where apparent traces of Sadus debut and „Pleasure to Kill” combine, even Mikael vocals are a fusion of Darren and Mille. With skill, the Swedes move between two different thrash stylistics, in turn, „Undead” and „The Storms” have got a distinct touch of „Schizophrenia” when the pace is slow down a bit.

These five equal shots don't let me sit snugly in my lounge chair, however I cannot tell they boogie down indiscriminately. No, there are slowdowns used to be rather a small breath before another merciless attack, as well as well-though-out guitar leads, short, rampant, and longer, more complex with the best example in mentioned „The Storms” that ends the whole. For sure, the production side really helps the thing to be absolutely hot, especially when it comes to the work of rhythm section. It slays and always great to hear a thrash band putting the bass lines in such a way. I wrote the songs are kept at the same level, yet I lean towards „Perpetual Dormancy” to be a leader in the herd, with its perfect beginning and catchy riffs all the time. And believe me, this misleading title is a complete contradiction to the sounds coming from this ripping song.

I wasn't a lucky freak to get „Violent Intensity” when it came out back in 1999. The Ep seemed to be just a typical way of progress I guess, after two demo tapes. Then the debut appeared in 2000 and after two years, Hypnosia went asleep forever. All right, let's summon the 1999 year once again and take a look on Hypnosia main influence: at the time Kreator records „Endorama” album considered to be the worst in their discography, and having nothing common with the thrash roots; Sadus, after releasing „Elements of Anger” (which I really like!), the most experimental and... with no (almost) thrash shades, goes to inactivity / hiatus era. So, what is the point? This reviewed Ep was like a medicine for the times when thrash music was in hiding and even now, it's a musical cure, as there are not so many bands unleashing such kind of thrash. And such kind of straight insanity.