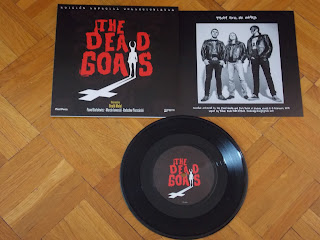 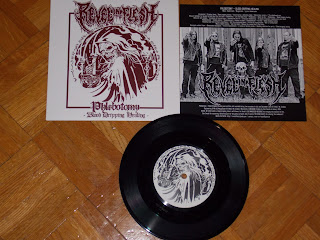 And here I have another 7’ split in my collection with a by default affixed signature one hero only. Released by Selfmadegod Records and limited to 500 pieces was bought by me because of The Dead Goat. The split brother, German Revel in Flesh, wanted to conquer my soul with a song “Phlebotomy”, but they… failed. The first date with this Baden-Württemberg based combo showed the track to be mediocre and boring, the leading guitar theme didn’t convince me, possibly due to its banality. The whole seems to be straggled too much, leaving an unfavourable impression and being not a good invitation to the Revel in Flesh discography.

Fortunately “From Hell He Comes” is a total reciprocal. Smartly divided into two slaughterous parts, the Poles didn’t turn their Swedish old-school (left hand) path off. They started to build a massive altar with dismemberish and entombedish bricks, and this almost seven minute track isn’t an exception. For sure it is one of the best children from the goat’s happy family: after short intro I immerse into the abyss once called Indecent and Obscene. Yes, the second Dismember album is a good determinant of all the things are about. Fast, furious guitar layers supported by frenzied rhythm section wreak havoc, in turn the second part is some kind of tribute to the opening whiles of mighty “Dreaming in Red”. It’s bloody delicious! Good that the production doesn’t vary as compared with the fungus children. So… forget about the Germans and don’t change the wax: The Dead Goats fuckin’ rules.