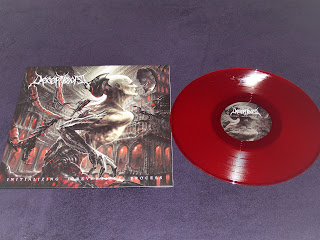 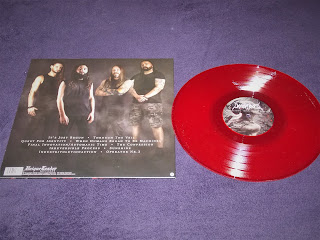 There are so many members connections in the world of Italian (brutal) death metal kingdom, please take a look on Fleshgod Apocalypse, Hideous Divinity and Hour of Penance to name just a few. And yes, Deceptionist isn't a rookie in the family, being yet another deathly hybrid on the scene. Founded by Antonio Poletti (ex-Hideous Divinity guitarist, he took part in „Cobra Verde” recording) and Claudio Testini, musically they do not flee from the standards once given. Such tunes are roots and boiling blood for Deceptionist's musical message and they play in the same league: it is served technical, it's incredibly brutal and intense, but luckily Antonio didn't copy unthinkingly more known precursors. What's more, his own visions led him to something original...

Of course, it's impossible to omit Pär Olofsson front cover art – it draws attention immediately giving clear understanding what are lyrics all about. And forty seconds of „It's Just Begun” introduction that contains of samples is a breath of mentioned originality. It's nothing new in music at all, yet Italians used it in a very good way gaining an atmosphere of futuristic reality, lowering and inevitable, reality that humanity will face sooner or later. Production-wise, it is maintained in definitely modern standards, and I cannot imagine this album with old-school touch in the vein of Sunlight or Morrisound. Anyway, it's totally sterile, soulless, machine-like... and perfectly fits the sounds and Deceptionist's concept.

As written before, the band is an Italian scene child with Hideous Divinity as one of the fathers, yet some brave journeys into Necrophagist's first album domain are discernible: in most broken „Final Innovation / Automatic Time” or „Sunshine”. The musical content doesn't let me feel bored, there are many slow-downs, however it's obvious the sound carnage is the main key to enslave the mind and the body. Luckily, using of samples in such an extensive form, isn't a determinant to name this album industrial (which I really do not like), yet track called „Industrivolutionaction” isn't my cup of tea whatsoever. Each (mechanical) component has its own place: rather one-dimensional and pretty clear Andrea's kind of growls, quite catchy riff layers, interesting leads, 'I'm not a human at all'-like Claudio's battery and lashing bass parts with the best moments in „Quest for Identity”.

Summarizing this debut, yes, it's a pretty decent piece of (modern) death metal. The adjective modern in the case is absolutely significant, as it is impossible to swallow for old-schools freaks I guess. Anyway, this red piece of wax is a frequent visitor for my gramophone. Not only because it's crude, merciless, bestial and no-human stuff. For sure the pervasive futuristic aura did a huge and overpowering impact on me. Samples are one thing, but the closing part of „When Humans Began to Be Machines” is highly frightening and totally nontypical for the album. Thus, could I name it kinda climatic album? Probably yes, in some sick way. And one more interesting thing on the end: although there are many great moments here, the best one is „Irreversible Process” lasting three and a half minute and altering effectively my body into the machine. Amazing, indeed. And really harrowing...

Posted by Pawel Przybyl at 10:12 PM No comments: