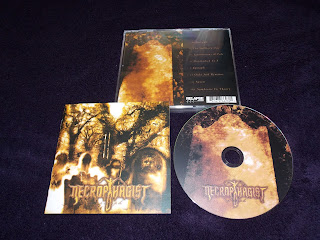 2002 edition of Fuck the Commerce festival was the first opportunity to see Necrophagist crew on the stage. I only knew band’s name and few complimentary opinions coming from around. But what about the show? Just good tech-death with “Crystal Mountain” as a Death’s cover in the setlist. Then two years passed and I bought their second attack called “Epitaph” released by Relapse Records. First contact and I’ve been just blown off. Ha, and musically stabwounded. And if I got any idea what Necrophagist was all about, “Epitaph” completely carried it into the next absolutely better level. Frankly speaking, I didn’t expect such a sonic madness.

Thirteen years have passed since its premiere and the main question should be asked: does “Epitaph” is still such enjoyable slab? Man, it really does! And it definitely belongs to the top-league of technical death metal genre. But this is different a bit as compared to the gory debut “Onset of Putrefaction”. The leader, Muhammed Suiçmez has finally found three young  talented musicians that were able to follow his complex musical visions and the second album has been recorded by just a band. With a perfect sound realization, the music itself became… more accessible. It’s impossible to find here this pervasive putridity, gore-swamped lyrics or even some grinding parts. No, it’s not the way “Epitaph” treads as it astonishes me with… life and vivid uncontrollable streams of energy. This is a real volcano of emotions with rampant lava burning everything on its tract. I can do nothing but worship composing sense of Muhammed (only one closing track is written with a help of Christian). And yes, technical virtuosity is present everywhere, but I have no impression it has been served to be technical for the sake of being technical. Indeed, the guitar tone in this recording form doesn’t let “Epitaph” get the higher level of brutality, in turn, rather steady monotonous deep growling balances it in a something way. The Necrophagist team is an unity, no matter if the wall of sounds furiously strikes the silence, or if I am delighted by musicians unimaginable skills.

And you better believe me, because each single song is a confirmation of my words. And maybe if “Ignominious & Pale” is the leader of the pack, no track or note is a waste of time. The band perfectly doses the songs tempo and the whole final effort erases such words like ‘boredom’ and ‘yawn’ from vocabulary. It’s worth to pay attention and drown in completely broken parts in “Diminished to B” (it seems it doesn’t want to take a run at all), or in queerish ending of “Only Ash Remains” and more atmospheric side of two last killers. On one hand, the music is to the bone, precise, elaborate and seemingly hard to understand, on the other hand the whole musical performance gets my nervous system with ease not only because it is catchy in a sick way which cannot be unnoticed. In a sonic stormy sea of rhythmical surprises, musical fury and accuracy, “Epitaph” became just a superb death metal album. And these eight songs are a real… epitaph for the band. It is widely considered 2010 year as a last active period, seems that third extremely long-awaited album won’t be another fascinating part of Necrophagist discography. Or, maybe I am wrong? Muhammed, do you hear me?

Posted by Pawel Przybyl at 9:34 AM No comments: 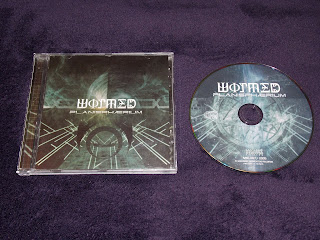 Spain, once the land of conquistadores, now the fatherland of another adventurous ones called misleadingly Wormed. But for them our planet is not enough and it’s time to raise the head. Yep, this is going to be a trip straight to the galaxies. And believe me that whole musical offer is out of this world definitely. But despite the final mark, it wasn’t love at first sight. What’s more, the production way forced me to put it back on the shelf and cover by some Nightwish stuff. Luckily “Planisphaerium“ devoured Finnish pride unmercifully, yet the sound of drums is still an element that disappoints me a lot. I mean, snare drums sound really awful: cartoon-like and seem like recorded beyond the Wormed spacecraft. Just take a listen to “Tunnel of Ions” (1:20), the beginning of “Voxel Mitosis” and “Ylem”, or the title one at 2:25 and we have got few glaring examples.

Anyway, it had to incubate. I didn’t know when but it has finally given me its succulent most precious fruit: the music that extinguished my poor senses. Seemingly they don’t deliver any new formula to this such hermetic genre and it is quite easy to put them next to early form of Cryptopsy, however something has been mutated during the mitosis process. It determined the overall final impression of “Planisphaerium”: it refers mostly to perceptible dehumanized aura yet it has nothing with soulless stupid robots. It means, as compared to Canadians, Wormed go further in exploring such sounds. What’s more, the music became sicker, completely brutal and broken, for any untrained ear – absolutely not to swallow and digest. This album is simply uneasy, nervy, tumultuous. Like a surface of an asteroid. Yes, all the cosmic comparisons aren’t anything strange in the case of Wormed, because Wormed is a gift from the space itself. Just give a try to the lyrics with no gore or even not Christ slaying poetry. You know, it’s cosmos thing. And for sure Phlegeton has few books with astrophysics and astronomy topics. Yes, there’s no gaining it: the vocal parts are superb and were the first element I started to worship this album. Try to imagine lower sounds than Antti Boman and “Nespithe”. Try to imagine the fuss in Phlegeton’s organism before any rehearsal or live performance. Try to imagine Phlegeton’s poor trachea peeping “Dear God, another song is coming…”. Yes, all the vocal devastations are just added value to the whole hoisting it to the great level. If you love it, you’re with them. Like me. There’s no another option.

It’s not a long stuff but with enough minutes to give me a proper dose of cosmic madness. Since the first second it ties the senses down, dazes, then masticates furiously. Yep, it is technical and brutal if anybody needs such an adjectival description. “Planisphaerium” is a some kind of monolith, like in sir Clarke’s Odyssey, it’s mightful, yet it demands the attention all the time. Granted, first two, maybe three spins didn’t convince me, and I considered the songs not to be varied enough. But believe me, what a misleading impression! Now, after detailed analyses and taking the album to pieces, I adore it almost boundlessly. For sure it is impossible to choose the leader among the songs. And in spite of mentioned drums sound, I swallow it with pleasure. Well, the drummer Andrés, he is a real beast behind his drum-kit: his performance is completely unpredictable, from fast tempo to frantic blasts, from broken crushing slowdowns through d-beats to jazz-breaks. Luckily the second part of rhythm section isn’t worse, not only because it has been recorded perfectly. Just listen to these shows in the title song or “Pulses in Rhombus Forms”, especially during slows or slams. Riffs serve a real kaleidoscope of forms, we have speeds of light and slow-downs (with one minute lasting slam in “Ylem”) and many killing parades between them. Javier doesn’t bring any whiles of relaxation, maybe catchier fragments in second part of “Voxel Mitosis” (from 3:20) or lighter ones in “Pulses in Rhombus Forms”. In addition some atmospheric short moment with clean vocals in “Geodesic Dome” or direct musical references to Cryptopsy (“Ylem”, “Geodesic Dome”).

There’s no anything neutral during meeting with Wormed first album for me. Always I am engorged by this bestial dimension to be finally wormedized. The offer is a first step in their astrophysical journey, though another two albums “Exodromos” and the newest “Krighsu” are with better sound realization fortunately. My re-edition from 2005 contains some bonus tracks as well, but it is rather redundant (promo track “Voxel Mitosis” from 2001 with horrible dry production)curiosity (tracks 10-14 taken from “Floating Cadaver in the Monochrome” demo) and I do not take it into account at all while contemplating about the final mark. And to judge it fairly there is only one way, because musically and vocally it is just a splendid title. I realize it has been given completely subjectively as “Planisphaerium” is great example of love it or hate it album. Anyway, definitely one of the best items coming from the land of Spain.

And two more things on the end: forget about Nightwish titles in my collection and do not let Phlegeton dehydrate our poor planet. The vision without water (and alcohol!) is pretty terrific, don’t you think?

Posted by Pawel Przybyl at 9:02 AM No comments: