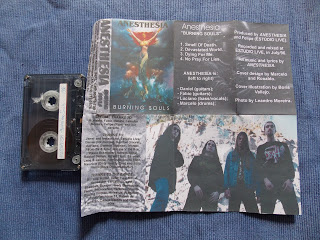 Excuse Me, My Soul Is on Fire

This demo was released in 1996, so, as you probably know, that times were totally crazy as compared to the present. If you were looking for some unknown bands, the way was simple to get it: a flyer in the zine, money in the envelope and here we go. Yep, the foreigners can be surprised when I was waiting for the answer several months from the land of Brazil (Polish post office rules!). Such was a typical mechanism to own the “Burning Souls” copy. To put it briefly, the stuff that kicked my ass at the first time and nothing has been changed until today. But, mind you, the second half of the nineties was a beginning of a birth of a new Brazilian beast. Krisiun with the debut “Black Force Domain” dated on 1995 and the absolutely killer “Apocalyptic Revelation” from 1998, gave a sign of the things to come. But, Anesthesia seemed to live its own life down there in Caxias do Sul with a killing dose of death and thrash. Or better to write: thrash and death.

Yes, I think thrash metal is the base here, and the Brazilians follow the well-known path with such names as Sepultura or Slayer (“South of Heaven” and “Seasons in the Abyss” era), however all-the-time fast tempos and neck breaking shots won’t be found here. The speed isn’t the main thing that absorbs my attention. The opening track “Smell of Death” seems to be sound asleep, it doesn’t want to gain a faster tempo. It’s good that this misleading impression disappears while the song grows and shows the fury. The demo has a really good production, each instrument is audible without any problem (especially bass lines), it has this killing force with harshness and crudity making “Burning Souls” a true road roller for the senses. The vocal lines of Marcelo and its animal manner of articulation are the main reason I can name the music as death metal, that’s right, some short outbreaks of speed are present here and there, yet the mid-tempo reigns. The Suliani brothers put rather simple riffs in the structures, yet “Devastated World” has many complex tunes as well. Generally this song seems to be very anxious and turbulent. In turn, the third piece “Dying for Me” which is the fastest one, has brilliant riffs suitable for “Beneath the Remains”. Good guitar leads are also maintained in not so fast manner, they are really memorable and well-thought-out. These eighteen minutes runs smoothly, the idea is good to show the skills, however something broke in the kingdom of Anesthesia…

Still I like this piece of churlish ancient denial of fucking samba, still I listen to the tape, and what is more, this title belongs to my beloved demo tape list and nothing can remove it from its praiseworthy place. Unfortunately “Burning Souls” is the final word of farewell to the world. After two years of releasing of the demo, the musicians decided to change the name into Abominattion and musical direction. And now, after all these years, I’m wondering if it was a good move… 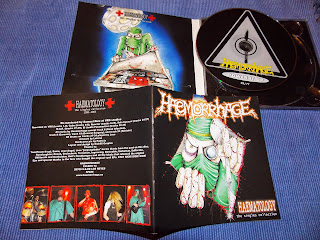 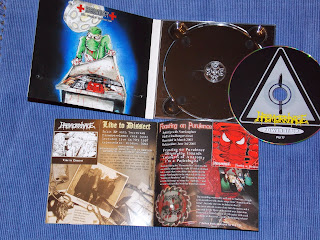 Blessed are those pathologists who own all the splits that have been vomited by the Spaniards into the festers of the underground. Unfortunately I wasn’t able to buy the things, yet my sweet adventure with dr. Obnoxious has been lasting since the “Anatomical Inferno” times. So, for some it will be useless, for me just a great title. This time 34 hits have been extracted from the splits with such bands like Nunslaughter, WTN, Embolism, Suffocate, Obliterate, Gonkulator, Ingrowing, Groinchurn, Denak, Terrorism, Damnable and Christ Denied. Since 1995 to 2005, ten rotten years in pus on the whole. Modestly released digipak contains of all the front-covers and some words of explanations on each title, starting from being absolutely crazy due to releasing their first vinyl through Morbid Records to the unreleased split with WTN due to the label lost the original masters, and what is interesting, at first the band has been accused of using some Nazi symbol in the artwork. Hard to believe that shit…

This compilation hasn’t got any musical deviations. This is the same perfect goregrind I am accustomed to, although these killing 73 minute beast is a really challenging task to get through because of its rampant blasting fury and take no prisoners attitude. Well, or maybe I should write take some prisoners attitude for a surgical intervention?! Anyway, this is sick, deranged art that makes my senses armless. And no matter which hit gets out of my speakers. For sure my attention was focused especially on “Putrefaction (I Still Remind)” song as it has never been put on any album. And right off it became another catchy gory-story next to such highlights like “Feasting on Purulence”, “I’m a Pathologist”, “Enshrouded in Putrilage”, “Decom-posers” or “Anatomized” to name a few. The songs schedule is like an archeology work, we start from the newest split at that time to the oldest piece dated on February 1995. And that is great idea the songs haven’t been mixed. Summing the things up, it’s a really good compilation, with treasures of anatomy only. Beyond the shadow of a doubt, the Spanish pathohaematology makes good progress.

But beware, dr. Obnoxious is as watchful as a hawk and ready to anatomize the senses and the flesh… keeping a scalpel on high…