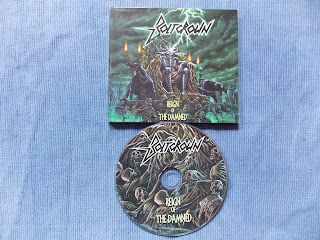 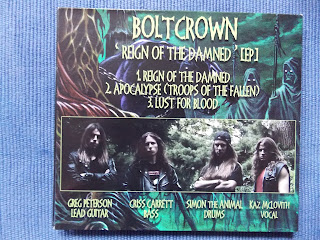 Reign of the Bloodlust

Boltcrown is yet another formation of those old school bands that rose together with a new wave of well-known sounds. Created in 2013, they spat a debut recording one year later, providing really promising throwback to the great times of unhampered fury of the fresh ideas filling contemporary scene. It’s easy to burst into ‘copycat’ bag, but in the case of “Reign of the Damned” such an effect is impossible luckily. Yep, formal appearance is not the essence, just like modestly released digipak. But it helps if the music kicks the balls, right?

Front cover painted by Guatemalan artist Mario Lopez may lead into error. It can say everything and nothing about the metal genre to come. But the first seconds of opening title song blow any doubts: heavy speed is infusing into my circulatory system. While cerebrum is reached, the power of metal takes the heart by (bolt) storm. All right, three songs on the table, rather fast tempo dominates, yet the musicians know how to change it properly, attaining nutritive portion of sounds. That’s true, the production side is without any signs of nowaday modernity, with each element audible in the wall of tunes, and it is definitely added value when the bass lines are concerned. The old spirit is alive in its entirety, bringing some memories of old Exciter or first Iron Maiden’s debut album: similar magic (yes!), the same impulsiveness, all mixed with Enforcer touch supported by own Boltcrown’s conscious refreshment. Heavy metal will never die! Exactly, and if the only my complaint refers to running time (14 minutes merely!), no second is lost or baseless. And the last piece “Lust for Blood” is a real crowning achievement in short band’s career. This track is one of the best new metal killer I have listened in 2015. Scorching rhythm section invites with some portion of frantic riff resembling me Annihilator’s “Human Insecticide”. The whole guitar layer differs a bit here, it doesn’t deliver such melodies as compared to the two previous tracks maintained in rather speed than heavy manner, although the main goal of Lust is to nail the senses down. And it happens! Fantastic chants and vocal lines make me sing all day long.

Yes, vocals are always the most neuralgic side of heavy band, especially when it bears upon Polish crew. And I can assure you all that Kaz didn’t fail. His range is between middle and high screams (very successful I must admit), as the vocal cords with ease and smoothly generate the words, yet I have impression this is not the end of his creativity. What else to complete the picture? Skillful musicians, memorable not chaotic leads, headbanging flow. Yeah, “Reign of the Damned” is a very fruitful despite of such a short time and me will never get tired to listen to such bands. Future looks great as potential is visible. So guys, it’s the highest time for a full-length, isn’t it?
80/100
-Tlacaxipehualiztli