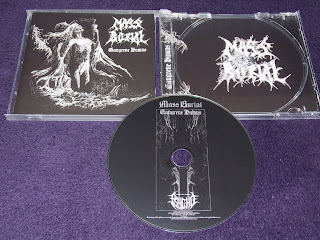 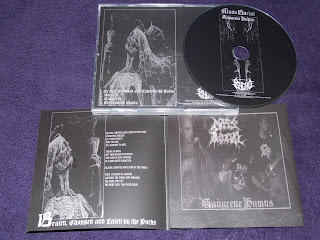 When Music and Medicine Collide: At War with Anaerobes

In our modern times it is impossible to follow and then listen carefully to all the metal bands emerging from far and near. What's more, it is impossible to follow all the stuff with Swedish death metal flyer. Well, I came across Mass Burial when got their second full-length somewhere in 2018, and decided to buy this Ep without a flick. Released under the banner of Polish label Wydawnictwo Muzyczne Psycho, it strikes the sight organ with absolutely neat bicolor front-cover done by Juanjo Castellano. Musically, Mass Burial doesn't try to walk away from mentioned earlier old-school genre, even for a while (but yes, there is one surprise). With the very first seconds of „Beaten, Chopped and Eaten by the Porks” I face the storm of well-known stuff. Neither experiments nor unecessary quirks, just a pure tribute to the music I have been worshipping since first „Left Hand Path” / „Clandestine” meeting. During this gangrene madness, the Spaniards head to Dismember heritage mainly. And I have an impression that they mixed their two albums: „Death Metal” and „Hate Campaign”, however the structures are made of more rampant rhythms. The Spaniards boldly use it in each song, mentioned beginning of the track is the best example, here supported by furious leading guitar and absolutely memorable riffs. Then, add to the whole the guitar tone that no one can miss and the proper dosage of melody, and the formula for good old-school shit is just ready.

I wrote 'bout the speed. The same goes with catchiness. Deftly they dose such moments, not only as rhythm guitar is mentioned, but also when it refers to the leads, just take a listen to the ending part of „Unit 731” or two leads in the opener. And when ten minutes pass, „Persecution Mania” finishes the menu. Yes, you're not wrong, this is the Sodom cover. It has been played the decent way and nothing more than that, yet I'm still asking myself what this song is doing here? For sure it doesn't fit here, it ruins a bit the final impression, but if the cover song is needed as air to breathe, I'd like to hear any Dismember piece for the end of the title.

„Gangrene Hymns” seems to be kinda pass for a bigger label. The next second album has been released by Spanish Pathologically Explicit Recordings with two songs taken from the Ep, „Unit 731” and „Gangrene”. I truly do not know if it helped in any way, as the scene nowadays is overcrowded by such bands as Mass Burial, however if only good music really counts, these ten minutes of Swedish insanity are worthy of some careful spins as I do from time to time. Anyway, the band is still active, all the members are pretty active in many various bands, so the metal blood is warm incessantly. With no time for the rest, 2019 brings another title for their discography, the tilte I should check out sooner or later. Thus, let the gangrene flows through the veins of the dead. Or... something like that.