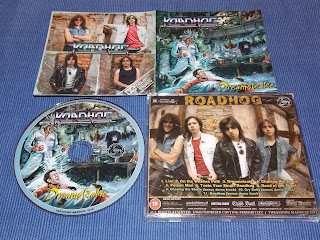 Roadhog Strike: Give Me My Dreams Back!


I can only be proud of Polish nowaday scene. I mean, the newborn crews that execute classic metal form: Thermit, Repulsor or Młot na Czarownice to name just a few, my beloved ones. And as of now, another group called Roadhog joins the team with a great impact. The first mention about the band has been noticed by me in the newest invaluable Pure Metal magazine. Thus I decided to check the thing out in short order. My copy has been released by Thrashing Madness, without a cover Salem’s Wych from the first version done by Stormspell Records, however three bonus tracks took their snuggery on the back of the machine luckily.

Before writing some wise words about musical offer, there’s a need to point out fantastic front-cover painted by J. Kurczak. This legendary person made a nice invitation to the kingdom of Roadhog. And the first song “Liar” doesn’t disillusion me, as it bursts me asunder without any mercy, bringing first-class heavy metal to the stage. Decorated by razor sharp riffs with super melodic lines in the chorus, it makes a demolishing opening! But “Dreamstealer” doesn’t contain of fast killers only. No, there are mid-paced compositions and two of them are the highlights here, and if you’re gonna wake me up at midnight, I will shout brazenly: “Poison Man” and “Dead of the Night”! Both are absolutely one of the best songs I have listened to in this year. And one digression, that’s true that the album has really powerful sound with such a desirable ancient touch produced by patronal hand of Olof Wikstrand from Swedish Enforcer. This band, widely known as one of the most promising crews in the genre, wouldn’t wait any longer to take these songs to their set-list. And with no fear I can put this splendid duo next to such Enforcer hits like “Katana” or “Undying Evil”. Pemo, who is responsible for music and lyrics, has a really astounding talent for creating such catchy parts, he smartly avoids creating banal sounds or making my pancreas to produce insulin. “Dreamstealer” has no fillers, no weak songs or redundant keyboards passages. The music is straight-forward and to the bone, to my heart, with a creed smelted in “Roadhog” song: “Hear the pounding metal sound / coming from the underground / feel the heavy guitar scream / it’s a nightmare it’s a dream!".

Names, names… Yes, label sheet gives one direction to the Veto, Tyrant or Stormwitch areas, but I don’t entirely agree with that. For me it’s a far-fetched simplification. And to put it briefly Judas Priest (acceleration and sound motility), Heavy Load (melody lines) or archaic Running Wild come to my mind, bringing really gorgeous yet explosive mixture still kept in old heavy metal dimension. Because of they come from Poland and sing in English, there is an exigency to cock the ears towards Krzysiek ‘Lawless’ effort. When the band tortures in a fast way, Krzysiek spits the words absolutely implicitly and outright, the problem is when Roadhog started to reduce a gear, just take a listen to “On the Witches Path” and this too audible Polish accent. It sounds quadrate-like a bit, yet during many meetings with relentless bonnet I just got used to it. For sure his voice and the timbre are good and well-done for such sonic collision.

Thrashing Madness did a good job once again. The booklet looks really impressive with many pictures, one interview and a short bio of the band. But, as compared to such re-edition of Repulsor, some spelling errors and typos didn’t disappear unfortunately. But this edition contains of one real treasure and even if two tracks are known from the main schedule, “Cry Baby” kicks my heavy metal ass. It sounds like Pemo did an archeological work at Rolf Kasparek’s home and found a forgotten exchequer. This song sticks to my brain and cannot leave. And this paralyzing guitar lead… I’ve just been catapulted into the “Gates to Purgatory” magical times.

Summing all the things up, the case of band’s name should be explained. The musicians do not attach importance or any ideology to it. Road hog is a reckless driver who obstructs or intimidates others. So, can you feel it? With speed, take no prisoners and no mercy attitude they assassinate on your glandula suprarenalis. Follow them or be crashed. There’s no other way. But now I can’t imagine Zakopianka route. Is it possible to put there another machine, this machine? This may get messy. All drivers, you have to be warned…

And the last thing on the end: if I’m not wrong and my auditory meatus is free from cerumen, I can hear some similarities to some part of Rotting Christ song “King of a Stellar War” during 2:20-2:32 in “On the Witches Path”… 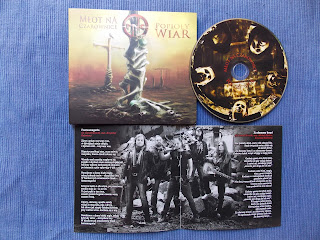 Of Burning Stakes and Freedom

The hammer felt steeply on my cranium. Totally unexpectedly, in spite of I’m not a witch at all. By a miracle I guess, I found the band’s profile and fired “Za złamany krzyż” song. And something has moved forward: a fast payment, not a fucking download, and modestly yet neatly done digipak with convincing cover art landed before my eyes. Released in an independent way (yes, sad and standard thing here in Poland…), this debut album isn’t a work of the rookies as the musicians have been torturing the instruments in the band called Fantasmagoria since 1999. Now with Polish name Młot na Czarownice (in English: ‘Hammer for the Witches’), they hope for a better future, even if the general concept isn’t anything new on the metal scene. The band’s name comes from Malleus Maleficarum written by Dominican Heinrich Kramer and published in 1487 for the first time. Maybe not every song is connected with this subject, although the verminous presence of the Holy Inquisition is perceptible almost all the time. Hence it is impossible to find any names of the local Pionki parish-priests that support the band on the back cover I guess…

Anyway, the vocalist Dawid spits the venom in Polish on the whole. Indeed, the bold step. But for sure it is added value to the overall mark. Dawid sings in the middle range, he doesn’t irritate, and with success doses tension and intensity of the own lyrics, no matter if the softer sounds are concerned (“Horyzonty niespełnienia” or “Przedwiosenny świt”) or the harder stuff hits ears. Musically the band tries to explore the heavy metal area beyond the shadow of a doubt, however I can be burnt at the Kramer’s stake if there are not heard hard-rock and thrash influences, especially in “Młot na czarownice”, “Za złamany krzyż” or “Psy ogrodnika” with Polish Kat’s mark here and there. Howsoever the opening track may you mislead. It is not a fast and the shortest one in a family, but the main riff is a… pure melodic Sweden played a slower way. Fat chance? Not really, just take a listen to a fragment at 1:28 too. The thing good for “Slaughter of the Souls” album! Then the next one is a proof the musicians are pretty gifted to show some variety in the heavy structures: thrashing-like licks and acoustic calmness in the middle. Good that the band doesn’t let me yawn when they throw some sand into my face in oriental-like “Czas zastygłych istnień”, fast killers like “Fantasmagoria” or the title song are mixed with aforementioned quasi-ballads decorated by beautiful and as calm as a millpond beginnings…

Exactly, the “Przedwiosenny świt” track. It’s perfect, believe me, with its overall atmosphere, mind crushing bass lines and phenomenal ending. But! This track is the beginning of the most exciting part of the album. Next-to-last is “Psy ogrodnika” with a really good portion of Dawid’s lyrics, maintained mostly in not so fast pace, bursts out with killing riffs and catchy chorus parts. And the last one, called “Nija”. After all these fruitful meetings with “Popioły wiar” I must admit: this is the best song here. It contains of all the elements the band should be proud of. Spectacular, dreamy introduction blossomy (yes, this is the adequate word) by splendid melodies, like a ballad from the best well-known crews, it possess my senses and keep them tightly. Then it turns into fast heavy metal avalanche giving paralyzing guitar lead that splits the air after mysterious Dawid’s declamation. Yep, really fine closing shot that left me speechless.

And if this shapely conglomerate is served in a good and interesting way, lyrics are the salt of the main course. They are neither stupid nor about proud dragon warriors. And… it’s enough. All right, maybe the general band’s concept has been predetermined earlier, although the author isn’t going to take a short cut. To put it briefly, one searches in vain for such words like ‘inquisition’, ‘church’ or even Heinrich Kramer, yet it is very clear that Dawid doesn’t want to put a copy of Malleus Maleficarum on the bookshelf as essential reading for young seminarists. Mostly the lyrics are for individual insight, yet I have impression that for Dawid the human stainless freedom, both spiritual and carnal, is the most important.

The releasing date isn’t random. The first of June couldn’t be better. My dear caring parents, leave the plastic shitty world you only know and buy your offsprings a real music, the age here is of no avail. Why can’t you start with this album? The Pionki district should be proud of this quintet that inculcates the only right musical form. Yes, it has been rooted deeply in the ancient times, yet the guys used vivacious nowaday colors to paint it all. Their foot-bridge between the epochs is very comfortable, without any holdbacks, making the final result nothing less than good. The future looks pretty promising for them, I hope they find finally a good label to promote MNC’s name and infect the minds of heavy metal worshippers. Ah, and one more thing on the end. I saw one review (probably the first one…) of this album and read about not so good and too raw production wise. What a nonsense! Raw? These sounds are complete contrary: they breathe organically, strongly with no any artificial moments, showing slashing Dominik’s bass parts as well. Demontażownia headquarters did a really good job!

And if the football team from Pionki has ‘powder’ in its name, then MNC is Schwerer Gustav. Maybe not with a nuclear flurry yet, but musicians made my mouth waters. As of now, I look forward to the hammer strike number two.

Posted by Pawel Przybyl at 11:30 AM No comments: