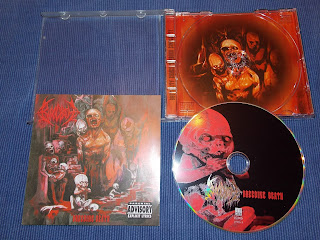 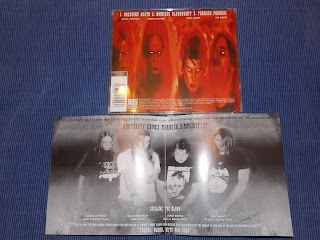 The Eleventh: Brutality Comes Through Simplicity

I hadn’t any expectations concerning musical offer of the group. Or better to write: the Supergroup. Well, I just bought this title as a loyal fan of Dan Swanö since the first sounds of “Dawn of Dreams” back in 1992. As to Bloodbath crew Dan has been completed by Mikael Åkerfeldt,  Anders Nyström and Jonas Renkse. Sounds promising? Yep, exactly. As the booklet informs, the main musicians goal was to bring back the old Swedish metal, to pay a tribute to the old school scene reigning the late eighties and the first half of the nineties. And this fact I cannot strive with. But from the very beginning. Well, the recording process took tens hours only, after a laconic phrase ‘let’s play something in the vein of the ancient death metal’. Beer cans have been opened, Dismember’s demos filled the air. It started: two songs were born off-hand and then recorded and mixed by Dan. Unfortunately he lost it somehow, however one Mikael’s tape with this stuff survived. Guys decided to re-record it with the third song called “Furnace Funeral”. All seemed to be just a big league, but the stuff landed on Century Media’s desk at last…
Three songs and thirteen minutes. To put briefly: “Breeding Death” offers a fascinating trip to the times I am able to mind about. Maybe I didn’t bow down because of unexpected genius or what, yet the sounds stimulated my blood to run really faster, inducing tissues to live. To live? Good paradox, isn’t it? Just a fast glance on lyrical themes: burning the living ones, urine consumption or zombie feasting on cadavers. So, lyrically nothing new, musically, as the band stated, either. Luckily! The production side which is a Dan’s realm, is simply great. Not accidental, but with obvious well-known touch, giving a place for Renske’s crushing bass. And it is absolutely impossible to choose the song leader. For sure the ending aforementioned killer “Furnace Funeral” is like a repugnant brother of the title Entombed’s track from the debut album. I mean, this mesmerizing slow-down at 3:37 – 4:37, what a highlight! Tempo changing, morbid catchy parts, Mikael growlings and backing vocals of the rest, all the tracks spit the best to my face. Music flows smoothly, spatially, despite of its infectious charm, being an evidence it’s possible thing to ladle from something once invented and translate it on own creativity. That’s how it works in the case of Bloodbath. Pure, unpolluted Swedish old death.

Even if it lasts thirteen bloody minutes barely, even if I know “Breeding Death” by heart, I listen to it very often. What is more, this item is the best in band discography. And what about their intentions, possible calculations to make a success? Simply I don’t care as long as I get such a good slab with my beloved music. 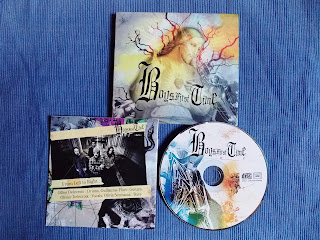 Usually I don’t make a practice of creating any musical summing up due to year’s end, but one thing is as true as steel: my last 2015 shopping refers to classic heavy and old school death titles in most cases. One of those exceptions is a debut (?) album of French band Boys First Time, although it wasn’t ordered by me, just arrived as a gift from the releasing label Polish Deformeathing. So I took my headphones, put ‘play’ button and the day turned into… Yeah, and it wasn’t the same. It’s even hard to describe the music in a proper way. Grind core? Math core? Technical death? Experimental? The bag is filled with many elements and directions, but is it an edible dish? The music clocks in 25 minutes only, ten short tracks keep the style of… Yep, I found some comparisons to The Dillinger Escape Plan or Converge. Well, I can’t verify it because these bands are not on my shelf, however French tunes take me to Soilent Green dimension sometime.

All right, I am forced to face a volcano of sounds and emotions. Being spat by broken instrumental structures and omnipresent complexity, with wide-open eyes I absorb striking arhythmicity, fidgetiness and good taste negation. But, it’s easy to fish out short clever melodic parts in sound avalanche (“Populate”) or superb (?!) melodious gap in “Ecstatic on the Brink”. For sure closing track tries to step aside a bit, not only due to its length (almost five minutes), but from 1:35 sounds go into dreamy, visionary areas, then the whole gets surprising guitar simplification with keyboards blots in the background. Vocally Olivier Delecroix proposes wide range singing: from cool clean calm vocalism especially in “Run from the Exit”, to the most extreme frantic guttural forms and screams, excepting pig squeals. The music; it is planned, just a conscious work by good and efficient musicians; thus it became interesting and very varied piece where there's honestly not a second that bores me. Just like a rollercoaster: riffs are changing unceasingly showing strange and bizarre tunes more than once, rhythm section has also its visible killing touch making the whole a complete thing to grind my armless senses.

It’s hard to choose the leader, it is impossible I guess, much easier it will be saying about the sickest one in the roster. Yyy… No. It makes no sense, as I swallow the whole without a drink. Worthy to say about general ability to mistakenness: from the band’s name suggesting rather a boys band, then the front cover being a good picture for your local vicarian to the releasing form itself: nice-looking digipak unleashed by small underground label and really decent production. Even first forty mysterious seconds may lead into error. And for sure this album isn’t for a common metal fan. For me: the biggest musical surprise in 2015. But it seems it is the only their missile, as there’s no information about any band’s activity. Or maybe am I wrong and I’ll be shocked one more time in future. Anyway, Relapse guys should find them and sign a deal.

And man, even if I don’t like French cooking, this dish is absolutely gorgeous.  Bon appétit!