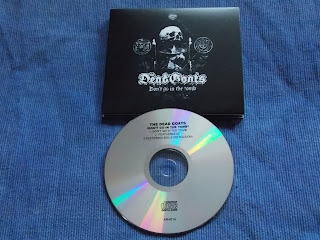 The Tomb Impression: More Filth in the Blood

This front cover that comes into the view, may lead into an error, as it is a proper picture for black or death metal with occult touch. Fortunately The Dead Goats doesn’t change its style, and the members don’t carry such creative pseudonyms like “Caller of the Six Hundred and Sixty-Six Northern Blasphemous Storms of the Unholy Majesty” either. Man, this band still impresses me a lot, being not only one of the best crews that spread the Swedish old-school sorcery into the soil, but just a metal outfit generally. Their last vomits are rather short ones, and this Ep isn’t an exception, lasting circa eleven minutes. But what a nice piece of music it is!

Ha, I wrote about eleven minutes, that’s right, but the opening title track starts off with a minute spoken intro. Then the next minute of rather slow tempo passes by, it’s like a knock-up before relentless sonic ravage, such a full of overwhelming filth. Yes, the sound realization took care about such impressions, as the music that pours out from the speakers is dirt, infected and contaminated with a reek of an old tomb. What a nice reference to the title! And if musically Goats made great play with Dismember second and third full-length, it’s good listening to some fragments of drums blasting fury (beginning and ending part of “Featherless”, or using Repulsion cover). For sure those two authorial shots are made to be a strong part of the upcoming gigs. That’s no surprise for me as it contains of this evident natural kind of melody, moving and catchy riffs, however in “Featherless” there is a breathing space put in the middle being best example how crushing bass lines are! Generally, Jawor’s mind-whipping instrument is another thing to be praised of.

Following the non-Swedish cover path, “Festering Boils” of Repulsion completes the thing, striking with frenzied drum works in last seconds. These eleven minutes run as fast as you can only think about, forcing to put the finger on button ‘play’ once again. And while looking on band’s discography, it’s clear the Goats dose the rotten ideas little by little, maintaining the concentration in blood on detectable label luckily. Something like The Dead Goats Slow Release® or Prolonged®. But guys, the next 2016 year needs more, just more stuff to listen to, maybe with The Dead Goats Forte® full version? I hope for the best.

Posted by Pawel Przybyl at 8:50 AM No comments: Completely unexpectedly Mexican beast called Zamak trampled my nice garden-plot. Unexpectedly, because I didn’t expect such a ravager meeting. What is more, even if the band being under command of Antonio Ruiz is twenty years old crew with four full-lengths in its curriculum vitae, this material is the first title with Zamak’s name in my collection. “The Dark of the Sun” consists of two new tracks and two re-recorded versions of the old ones, all clocking in 20 minutes, bringing a piece of solid metal craft. As for production side, the band decided to entrust it to familial duo from MAT studio. And the sound realization is just an added value, yet it doesn’t disturb the overall impression and throws away any kind of nowadays soullessness.

Musically Zamak is rooted in death metal dimension, although its branches reach black metal too, especially when the riffs construction is concerned. And two Swedish bands come to my mind: Dawn (from “Slaughtersun” era) and Dissection with the “Storm of the Light’s Bane” monument. Beyond doubt, the base here is the fast furious tempo, but the guitar layers have audible proneness to aforementioned Swedish names, creating quite memorable tunes. Venomous vocals of Antonio are very clear and well-marked, yet it is another thing that guides the band into the black side. Two first songs conquer my mind very efficiently and they’re just a good visiting-card of the band. Both consciously built and executed, with many successful guitar leads. But something different comes from the old songs, as they show some too melodic fragments that soften a bit the whole. But, that’s right, in “The Scars Remind Us”, those parts are mixed with obsessively fast drums as a proper counterweight.

Maaany long months have passed from the last “Hate Dominion Revenge” album, and this year was a high time to unleash something new into the underground. After the line-up changes, Zamak decided to record a safe production with four tracks only, yet I do hope it is a sign-post for better and fruitful future, especially when all refers to the newest killers. This stuff has its own charm, it hit my heart not only by impulsive and well-arranged portion of music, but also showing this Swedish touch I have been praising since ages. Minutes go very fast, with no yawn whiles, delivering bloody madness. And one more thing concerning band’s name on the end, if read backwards, it turns into ‘Kamaz’, Russian heavy lorry. The overall impact isn’t fully murderous as compared to sudden end-on collision, although Zamak is able to cause some serious injuries as well. 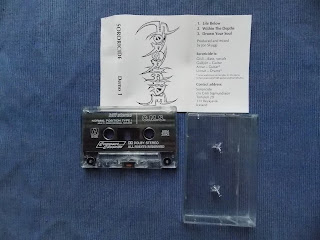 Iceland isn’t a country I have got countless metal items from. On the contrary, discussed demo is the only Icelandic piece in my collection, what is more, this vicennial tape (!) is still in good condition. The band started its way with fantastic debut “The Entity” (released in 1991) which is an extreme rarity in my ‘must-have’ titles, just like another ones, especially Ep released in 2009 with old songs. And maybe I cannot understand fully the band’s cult status and completely exorbitant price for the debut cd, this three-piece demo is a really strong release, even after such a long time. Its power is easily perceptible in nowadays old-school flood.

Demo starts off without any pyrotechnics. The opener is just a good inviting track, kept in rather slow tempo with short speedy outburst with a clear declaration: fastness is not the main key to grind the listener’s mind. Supported by sordid and raw production, musicians propose a killing mixture of… You know, I read many comments treating this demo (and the band itself generally) as something new on European scene, but being born on Icelandic ground, the band didn’t run away from Scandinavian death metal influences. And that’s great, as its main source is Finnish scene and Amorphis mighty debut album, not only with characteristic portion of riffs but with mesmerizing melodies as well, breathing its life in every single track. It’s necessary to add some Autopsy flavor too, giving nice feelings of putridity to the whole atmosphere. Best track? Definitely the last one “Drown Your Soul”, the most varied and interesting, with romantic-like beginning that brings even some kind of mystery and clean warm vocals (such singing appears also in hypnotic “Within the Depths”), then it turns out into a real deathly crusher divided by smashing slowdowns. Summing the things up: this material takes a run somnolently, but the last two strikes make mind’s mass destruction.

Changing fortunes caused Sororicide didn’t achieve spectacular success. I mean, contract and a chance to record another albums. And I don’t know if there is a possibility to hear something new from the band, because they are buried now deeply in Icelandic ground. But believe me, this demo is worth the trouble. I know, it clocks in 17 minutes barely, yet it delivers me everything I want to listen to such genre from. It makes I listen to these sounds quite often praising good old times.

Posted by Pawel Przybyl at 8:58 AM No comments: