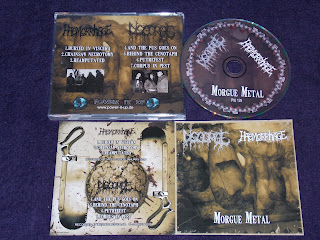 Such a split release was just a matter of time, I guess. Two highly respected bands, the true connoisseurs of human anatomy and diligent students of pathophysiology lectures united the forces to vomit musical entrails into absorbent layers of the underground. And believe me, these 22 minutes are anything but just a gore grind knockout. Three opening tracks shown by the Spaniards have been extracted in VRS Studio (like their „Apology for Pathology” and „Hospital Carnage” albums), so the sound is satisfying, very similar to the split with Dead. Musically I didn't expect any surprises, what's more, the first one „Buried in Viscera” delivers everything Haemorrhage is loved for: being one of the longest piece in their discography clocking in almost four minutes with slow, fast and absurdly fast paces, catchy riffs, obnoxious vocals, long guitar lead (all right, it's not obvious for them), mortuary-like atmosphere. Yeah, it's perfect for me. The second „Chainsaw Necrotomy” known from aforementioned split with Dead hasn't got an introduction, in turn „Reamputated” lasting one and a half minute fits into the pattern of merciless short gore choppings, such popular in Haemorrhage family.

Disgorge part is really worth a damn, as it is their last created stuff so far. And bringing some dates on the operating table: recorded at Inzonic studio in 2009 during two days and released as „Morgue Metal” two years later. The count is easy: eight years have passed and nothing indicates I will see new album this year (or ever???). Ok, first of all, I don't agree with some opinions the realization of sound ruined this Mexican side. For sure it differs from „Gore Blessed to the Worms” (same studio, same engineer) which has more human, but still deformed, face. This time, the sound is focused on extreme rawness and harshness and shrithes to the well-known Swedish dimension sometimes. Musically each song has something interesting to offer, providing very energetic and severe portions of sonic lunacy. Yep, there are pace changes through the whole, there are diverse Edgar vocals that prove he's not worse than Antimo himself. The four tracks flow with sickness and inconceivable putridity cumulating in closing „Corpus in Pest”. Its ending slow mesmerizing part, similar to „Pest.Blood.Metal” fragment from last album, just left me speechless making this track one of the best in Disgorge's anatomic crusade. Such catchy rhythm one may find in „And the Pus Goes On”, just like obscenely slow beginning of „Putrefest”. For sure, there is no space for jokes, everything is dead serious, still with gentle touch of „Symphonies of Sickness”, but mainly with its own ideas and corporeal morbus charm. And it's pity these thirteen minutes are the last bricks for the goregrind morgue, but I return to it very, very often. That's right, „Morgue Metal” as another kind of metal fascinates me hugely, being one of the best splits in my collections... But wait, didn't you hear, the doorway has just been closed... It's morgue time!


Posted by Pawel Przybyl at 8:17 PM No comments: