VOMIT THE SOUL - Apostles of Inexpression (2009) 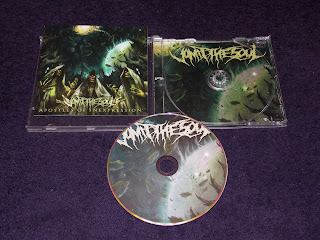 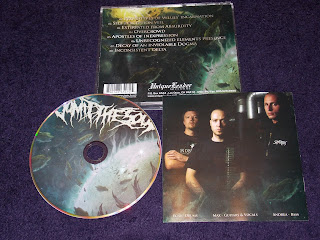 This album has been on my unending must-have list since the first sound contact with. Well, many years passed and I have finally bought it last year. It means the music and its indisputable quality isn’t any surprise for me. And if their homeland Italy wasn’t a cradle for such outfits, our present century brought many positive changes with 2000 year as a date of creating Lecco based Vomit the Soul. And as regards the band’s name, it has been taken from the Cannibal Corpse’s „Butchered at Birth” track list, though American creation isn’t the main determinant of the things to come. The Italians shows more complex sounds not forgetting about unrelenting brutality and, for sure, they are much closer to Dying Fetus, yet it is impossible naming reviewed trio Italian fan boys of Gallagher’s child.

The blast avalanche isn’t the only key to devastate the listener. What’s more, they offer medium or slow and slamming tempo most of the time. Yes, the opener „Prototypes of Values’ Incarnation” with „Unrecognized Elements Presence” are probably the only exceptions showing fast paces through the song predominantly, on the other hand most of the title has nothing in common with a word ‘speed’ at all. The important thing is the Italians are able to maintain the proper balance among changing tempoes and it works till the last seconds: the whole is perfectly crafted and arranged, offering so many goods to worship the album for aye. There’s no time for a breather, no time for introductions, with relentless clash of guitars and bass works. That’s true the album has great production and with a help of Stefano Morabito everything is served in a way it should be. Just take a listen to fantastic Andrea’s performance. He’s a real beast with the most astonishing moments in killing „Self Perception Veil”. In turn, Max provides multitude technical riffs, at first it’s not easy to swallow the thing and follow the unceasingly changing ideas as the whole is snagging, turbulent, completely broken with pervasive groove touch. But, the grinding wall of the eight isn’t murderous all the time, yet there are fragments with catchy melodies (it sounds pretty ridiculous, I know) with examples in mentioned second track or the title one. As for vocals parts, Max belongs to the elite of the genre, no doubt about it. For sure powerful gutturals dominates, but he tries not to be onedimensional, spitting high-pitched screams and squeals to the air. Mind you, his great efforts are perfectly put to the immane sound wall.

The main goal is to hold the listener by its incredible intesity and the Italians did it. Being rather ‘love it or hate it’ choice and very hard to go through even for any metal dude, for me these almost thirty-three minutes brought in such a spectacular form are just a musical banquet for my ears. As compared to the debut released in 2005, the band made a significant progress and now I may only mourn Vomit the Soul has been dead since 2011. „Apostles of Inexpression” triumph: starting from very successful Marco Hasmann front cover, through absolutely awesome portion of music to the final last impressions of deathly expression.

Posted by Pawel Przybyl at 9:54 PM No comments: 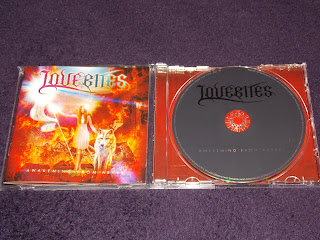 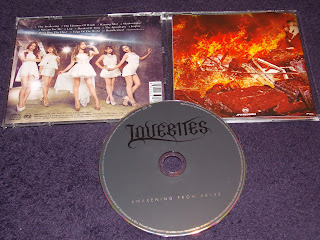 Towards the White Light

I won’t reinvent the wheel claiming that many things in my metal adventure happened by coincidence. The reviewed band isn’t an exception in that matter, however I would come across this Tokyo based quintet eventually. As an every day visitor on Encyclopaedia Metallum, I just saw enthusiastic review of „Awakening from Abyss”, and one glance was enough to be pole-axed for a really long time. Yes, „Shadowmaker” was the track that made me speechless and it’s obvious that the album is in my collection now along with their debut four piece Ep.

But choosing „Shadowmaker” as a promoting music video hasn’t been done by coincidence. Well, what we’ve got here? Expressive vocals, sticking melodies, furious riffs, mind-blowing lead attacks with prepossessing Midori’s smile and senses devastating rhythm section. Ha, typical description, I guess! But what can I do if the song is just one of the best power tracks I have heard recently (this century, I mean…)? One could say that the first impressions should be intensified these women are real belles. Yes, they’re beautiful but it doesn’t count as long as their music is first-class absolutely catchy metal…

Anyway, I got it with the previous Ep as well and all the songs from it have been recorded one more time. As compared to first versions, there are additional parts of keyboards („The Apocalypse”, „Scream for Me”), changed leads („Don’t Bite the Dust”), elongated closing lead in „Scream for Me” being a guitar duel between both guitarists. The last noticeable thing concerns the ending track „Bravehearted” sung in English, not Japanese this time.

The opening piece „The Awakening” is an instrumental introduction actually and divided into two parts, the first one symphonic and the latter with hard riffs giving a birth to ruthless „The Hammer of Wrath”: fantastic thrashing guitar parts supported by rampant duo Miho/Haruna with wild Asami shriek at 0:25… but this beast isn’t fully kept in thrashy way (just as „Scream for Me”), then it becomes mostly power style decorated by incredible fast lead. That’s right, first minutes really kick my ass, luckily this is not the end to worship the album which should be called just a bag of (splendid) ideas. Although the base here is rather power genre, infleunces from different kinds of metal mix collectively without restraint. I got more heavy oriented songs with Dio’s mighty spirit in „ Warning Shot” or „Burden of Time” and own interpretations on melodic side of Iron Maiden and touch of progressive licks in „Don’t Bite the Dust”. In turn, „Liar” has some references to Sentenced „Crimson” era in guitar melodies. Interesting that in all these 61 minutes, the Japanese didn’t decide to record any ballad song. True, „Liar” has wonderful balladic opening lasting forty-five seconds only and „Edge of the World” has much more such tunes (almost four minutes), but afterwards it becomes a power madness. But naming songs in this section would be meaningless without „Inspire”. Composed and arranged by ARAKEN (no idea who is it), uncannily catchy, it’s a bit different due its, let’s say, theatrical facade, and being the softest in the family, this track is a realm of Asami proving she is a singing angel. (listen to her sigh at 2:29…)

To put it briefly I do not listen to female fronted bands with clean vocals except some Japanese ones. But in the case of Lovebites Asami drew my attention in the blink of an eye. I’m just very pleasantly surprised, she can sing in many different ways, from gentle to aggressive, from passionate to furious, and in every second of her performance she is all out. That’s really great becauase, as the liner notes inform, Lovebites is her first meeting with metal music ever. I liked a lot her style of writing lyrics as well, she gives a conscious image of our world, however her heart is full of positive energy and hope for others. It helps, believe me. Asami, or better to write As-am-I (‘as’ in Polish means ‘ace’)? Yes, you are! And if I’m writing about energy, the mad M guitar duet appears on the stage. They simple rule serving killing riffs, catchy melodies, impressing leads mostly played by turns. And if Midori and Mi-Ya did a really fantastic work, I cannot omit the rhythm section. Both Miho and Haruna were once in Destrose, now their skills have been pumped in the new band fortunately. And it does work perfectly through the whole. For sure the crystal clear production helps to enthuse all the Miho wall-grinding avalanche with the best moment in the first stanza of „Don’t Bite the Dust”. Simply brilliant!

Yes, the beginning of the album is just a nail striking my poor senses, the aforementioned penultimate „Edge of the World” seemed to be kinda ataractic drug in musical means, but Asami lyrics till the first lead of Mi-Ya are just bitter vision of current reality. Written by keyboardist Mao Yamamoto known from Light Bringer, a real supporter of the band, the sounds create tension with every second giving a rupturę at 3:50 when power fuel reach the lovebiting engine. The last one „Bravehearted” rams me with no a breather being a true power anthem. Composed by Haruna and consummately arranged, I found this six minute firecracker one of the best songs in the power genre. The opening part of riffs is a real hammer of wrath in contrast to dreamy middle slowdown. Only bravehearted can comprehend its gist.

I didn’t light upon anything that would be poor or to reject due to my musical taste, what’s more, there’s no possibility to choose the leading track as the whole is maintained on the highest equal level. It is no problem for me to feel their heads and hearts are full of fresh ideas and hope and it’s absolutely great seeing Mi-Ya a permanent member at last. Their frank words from liner notes surprised me, but this is how the album works: just like the words the music is straight and frank. Supported by powerful sound realization, mixed and mastered at Finnvox, it appears as superbly composed and arranged, offering many various kinds of emotions. And antidepressant is another adjective I could describe it. The album became one of the best releases coming from 2017 no matter what kind of metal I’m talking about and definitely the best one with novice subtitle. Despite such a genre Lovebites execute wasn’t dominant in my last months, easily it found its right place in brutal death and gore grind detonations. It’s simply sensational and my review isn’t anything new, just another piece of writing adoring „Awakening from Abyss” in such an enthusiastic way.

And there’s one thing on the end I do not understand: why their names have been written using lowercase letters only? No my ladies, it’s a serious mistake. See it given properly: ASAMI-MIDORI-MI-YA-MIHO-HARUNA…