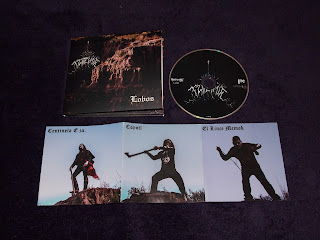 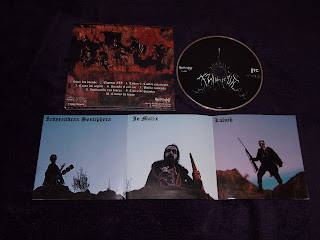 Tzitzimimeh Are Sniffing at the Wolves

That’s true my folk black metal knowledge is limited to a couple of bands and now it’s even hard to me to call them all out from my memory. To put it briefly, such genre is not my everyday toy as I consider it completely nothing special to listen to, sometimes when it comes to musical very poor quality, sometimes when it comes ideologically proposing nothing but a crass stupidity. This album is my first meeting with the Tlaxcala de Xicoténcatl based band and I was very curious the final result, not only because I’m just a metal freak, but I have been interested in Mexico history since the ages. Although one thing made me wonder at the start, namely why all the words have been written in Spanish? This fact is incomprehensible for me, as the band’s name comes directly from the Aztec mythology. However, finally Spanish is definitely better than English.

Well, let’s focus on the music itself. “Lobos” are opened by… too long introduction (2:33) and damn, I have an impression I started to listen any stuff of Necrophagia or Mortician. The latter is shorter one lasting 1:40 and becomes just a pure tribute to the simple Scandinavian second wave black bestiality. And these tracks might mislead, as the remainder is Tzitzimitl style exclusively. But Mexicans don’t provide equal good sounds that may be above any standard. Definitely I raise objections when it comes to the average black metal outbreaks (“Cuatro estaciones”, “Cuando el sol cae”) or irritating use of keyboards (glaring example in “Cuando el sol cae” which makes this track terrible despite of promising beginning). Then two tracks: if “Canto del coyote” is a perfect song to bang the head at the live performance due to catchy heavy thrashing riffs, “Piedra canteada” seems to be poor imitation of Running Wild or any Alestorm’s cover – this drunken musical revelry doesn’t convince me at all. And, in spite of vocals efforts, these songs aren’t kept in black manner. But, the album keeps going, and the ending three tracks deliver “Lobos” from artistic death. Really good using of clean vocals (long “Invocación a la fuerza”, “Tierra de gigantes”), straight-forward riffs and some influences from Motörhead (“Tierra de gigantes”). Yes, finally, my blood starts to run faster!

Allory Studio did a good job with sound realization, all served in natural way, even bass has its splendid moments (did Laloch terrorize the studio with his rifle?). When it comes to folk adjective in band’s style: this is definitely an added value, both Jo Malix (prehispanic drums) and Lince Memok (prehispanic ocarinas) improve and enrich the thing creating quite intriguing tunes. Then, vocals of Centinela (and different kinds of choirs) are another strong point of “Lobos” – it has been given in a good way, even blackish screams freeze my blood. So, the journey with wolves Tzitzimitl offers is like a roller coaster. From very average black portion I mentioned which does not repulse but does not convince me either, to interesting and promising moments that give a hope to hear something better in the future. But the whole must be equal in every single aspect, coherent and well balanced. Unfortunately “Lobos” aren’t a guarantee of it.

Posted by Pawel Przybyl at 8:52 AM No comments: 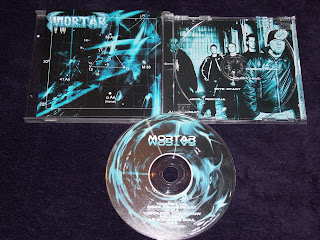 Through the Triangulum Galaxy

This is an enigmatic band for sure. Now I can’t even call to mind where I found any information about it. What’s more, they are absent in the zines I own, I saw only few reviews of this material in the web. Due to rereading of Arthur Clarke’s Space Odyssey series some weeks ago, I started to search for recordings with something related to cosmos or space science. And yes, despite of clichéd band’s name, the title “M33” is something like black holes or cosmic cannibalism for space enthusiasts. Why? Because M33 or Messier 33 is the Triangulum Galaxy, being one of the most distant yet permanent objects that can be seen with the naked eyes. Sounds promising…

I’m taking about an independent release, but believe me, everything is just perfect when it comes to producing process, simply Migdał Mobile Studio did a really good job making “M33” a professional thing to explore. The music itself isn’t the biggest secret to be solved, it isn’t a captivating masterpiece release either. Well, the Mortar’s style lies somewhere between melodic death metal and its technical side, I would say both genres seems to be complementary to one another and such a symbiosis works here. Although basing on things once intended, it has been served with easy flow, not boring ideas and quite brave visions supported by musical skills. And technical face of Mortar shows some connotations to Polish kinsmen Sceptic or Trauma, yet only two tracks (“Triangulum” and “Vision for Tomorrow”) have faster and wild tempo but it doesn’t last through whole songs. Besides, I found bashful sounds proper for two last Death albums, especially in broken second track or all these cosmic-like interludes that occur in almost every song. Vocally Hubbas tries to deliver many different kind of screams, growls and clean parts (to a much lesser extent though), sometimes his voice is deformed (“Alira”, “Influence”) and he did it in a really good way – no boredom whiles detected. As concerns melodic side, for sure old In Flames should be nice example for my theory, just listen to mentioned “Alira”. Effortlessly I can put it to the track order of “Subterranean”.  Then “Influence” contains of very interesting leading Swedish-like melody as well, in turn, in “As a Slave’s Soul” melodic meanings softens the whole track unfortunately.

“M33” ends with an instrumental title song. And it is a great pity that this album is a swansong of the band, because the last almost five minutes are really something good, something which gives a hope for better tomorrow. Actually the song combines all the elements I mentioned earlier, served in fascinating way and supported by… galactic touch. While summing the thing up, let’s play with a band’s name. If it’s a mortar as a bowl-shaped vessel in which substances might be pounded, each musician is a pestle and makes the various sounds a good music. For sure, mixing two genres in such interesting way is not an excess of form over substance. The band is gutsy, seems to be otherworldly with a cosmic vision and I liked it. But disbanded since 2009 for unknown reason for me…

Posted by Pawel Przybyl at 7:45 AM No comments: