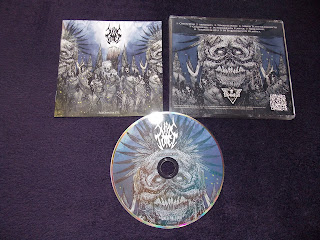 After my four reviews of Xipe Totec titles, it is challenging task to write anything new I haven't already done earlier, as Martin and Alex still ride in the dimension once created during „Eztlacuani” session times. I can't imagine any changes of style, I do not expect any changes of style and I got what I was asking for. Surely, three long years between „Miquian” and „Axomimitl” were something new for the band and I do not need to write how I was curious about Martin's new ideas and visions. The album brings eight tracks with an ending mostly acoustic outro, becoming one of the best records released last year. That means the band didn't let me down once again. Starting with the best front cover so far done by Alex and again with MAT studio sound realization placed somewhere between „Eztlacuani” and „Miquian” providing really energized bass lines, the two opening songs are just pure killers that leave my thoracic cage open and bleeding. Besides the things I have known the band for years there is a room for some kind of a breather: bass passage and drums solo (similar to Dew of Nothing song „Doomed by Omen Circus”) in „Cihuateteo” and rhythm section display in the title song. And mind you that this second track after slow almost forty second beginning mammocks the senses in a flash with ravaging paces and delivering slight melodic influences from Dissection's second album. Yes, Xipe Totec couldn't serve better opening for the album!

Even if Martin is absolutely faithful to his clearly defined musical visions, it's easy to hear through the sound avalanches there are some new things put here and there. Songs are longer and what's the most interesting, I have an impression that using prehispanic instruments has been cut a bit. Two tracks „Tonalyecantoc” and „Cuahxicalli” consist of atmospheric gruesome parts reminding me about similar fragments on Nile's „In Their Darkened Shrines”. For sure some melodic lines from „In Mimiqueh In Tlahtol” (an ending part), „Miquihtotl” and „Tlachihualiztli” are absolutely fresh air to the structure making the whole more interesting. Then, as an introduction to the first song, some samples from „Retorno a Aztlán” movie (to be more precise, it isn't anything new in Martin's career, just take a listen to Miquian's album „Tlaltecuhtli”), a short chat with archeologist on Xipe Totec cult in „Ahneli Tlahtolnemiliztli” or the complete novelty: mostly acoustic last song...

Thus, is there anything I should grumble about? Well, after maaany meetings with the album, my 'problem' concerns two mentioned tracks. The opening riffs from „Tlachihualiztli” don't convince me at all, the last one seems to be ill-thought out (spoken intro, prehispanic intruments and acoustic tunes given separately), although guitar catchiness is major-league in this blend. Of course, I do not treat it as a serious mistake, just like „Roots Bloody Roots” cover on „In Moyocoyani”, yet it drags „Axomimitl” down a bit. All right then, so how do I treat this album? My regular blog reader (hm, if there is anybody like that) should notice without any problem Xipe Totec belongs to one of my all-time favourite crews and with The Chasm and Desultory to the best death metal trinity in my collection. And summing the things up, this album is yet another proof that Xipe Totec music is still extreme and still extremely fantastic: riffs, leads, drum works, indigenous instruments, Alex bestial growls and Nahuatl lyrics. Martin surprises all the time with his great talent, there is neither time for boredom nor depletion even if they breathe death metal genre only. Changelessly, it is vivid, fresh, gory, sense devastating and with Mexica national heritage mighty spirit. Simply, this is Mexican metal of death keeping the glorious past alive...