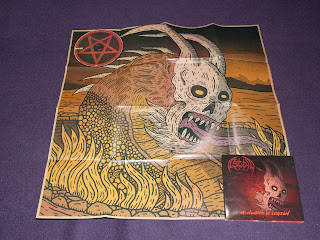 III: I Am Legion

Six years. Six long years have passed since releasing the second album of Asedio, the album that completely wrecked my senses. Its destructiveness and mental addiction forced me to worship this cult of rebellion. It was back then and you know what? Nothing has been changed so far and nothing is going to be changed. „El orígen de todos los males”, as a natural follower of crushing debut „Somos nada”, is still one of the best recordings spat into the underground this century. Yep, nothing has changed if quality of music is concerned, however there are things that should be mentioned right now. The band now is four piece as Andrés took the vocal duties, they went through some line-up changes, cut their hair and altered a bit own logo. Of course all these elements don't mean the band followed the way of Paulina Rubio. Fortunately, Asedio is still on the proper trail. I mean, their smeltery is active and delivers metal goods incessantly...

… however the front-cover made me a bit wonder as it reminded Golden Dragon of Unity that appeared in Mulan part 2, but I don't think the whole concept of the album has been based on Chinese history in a something way. As for production side, they threw dirty underground brand aside and offered more clean and orderly tunes. And for sure bass lines are the winner in this sauce with the best example in the title song. Musically the opener haven't got such a clout as compared to „Batalla contra la esperanza” or „Morbosidad del alma”. Moreover, this beginning with a bit faster „Pensamientos asesinos” disappointed me after first meetings. In addition, an instrumental acoustic piece that divided the sequence stiltedly didn't convince me at all. And yes, that's true the band doesn't offer complex ideas and completely broken rhythms, but I needed many, many careful listens to get the point of the third. Precisely, with an uncountable amount of hours I can write righteously (damn, as always!) „Mi nombre es legión” did not beat their previous works. After two splendid albums my expectations were extremely high...

All right then, let's start once again... I wrote about general impressions concerning two first tracks. „Árido infierno” starts in a slow way being some kind of answer rather to melodic death metal than thrash itself. Undoubtedly, there are catchy riffs, tempo changes, brand-new guitar lead and Spanish only roars. What's interesting, the song ends with an „infierno” word, just like in „Morbosidad del alma”. The next one shows different opening tunes, initially it's played more mechanical way, but it is clear evidence Asedio tries to find something new. I could compare this situation to Sepultura's „Arise” where Brazilians proposed new sounds in comparision to „Beneath the Remains”. The Asedio way is a bit shy, yet it is a good prognostic for the future. Admittedly the start wasn't a piece of cake and giving myself a short summation, I have been convinced by these two songs eventually. Simply I had to give them a chance. You know, something like 'patience is a virtue'.

And finally the third one in the family is the reason to write: all kidding aside! „Sangre inocente” is not only the best one here, but one of the best songs I have heard during this century. Fantastic portion of riffs in pure thrashing madness style with a stamp of sorrowful melodies take my heart without any mercy. There's a time for memorable slow down, there's a time for killing guitar lead in definitely Asedio style. But the best is yet to come: this mentioned leads turn into sounds in the vein of British masters like Paradise Lost (especially some similarities to „True Belief”) and finest moments from Bolt Thrower's „The IVth Crusade”. All mixed in perfect way made this track a real highlight. I just love such kind of mournful, melancholic yet catchy tunes. Genius!

That's not the end of new stuff or surprises. For example „Contra la muerte de la luz” with its beginning fitting to Running Wild's „Death or Glory” album – phenomenal thing! In a flash it stuck to mind bringing another pirate memories. For sure very interesting melody parts in the middle with dominant bass are worthy of note. As for structures and riffs „Anarquía” with rousing leads, re-recorded „Días de furia” (it sounds absolutely better) and „La horas violentas” which falls like a wall after aforementioned „Los crímenes del amor” keep the old Asedio genetics. And if we are one foot in biomolecular dimension, the closing title song has got some modifications in Asedio DNA strand. The four Mexicans obtained entirely new musical sample. Of course, it's still hot metal, yet served in a very intriguing manner.

I found verdict earlier, but it doesn't mean Asedio recorded a weak album. For sure it's not equal and its weaker mark results from differences in song qualities. There is an excellent leader, there are great songs and just good as well. The band explores unknown areas, doesn't avoid experiments, and what's more, all their efforts work in a good way at least. It is good evidence that balancing on the edge of melodic death metal and thrash, gives an opportunity to create fantastic tracks. I didn't expect „El orígen de todos los males” replica and I didn't get such a record fortunately. The newest one is a bit different but this fits to the whole musical Asedio message. I can feel the music flows smoothly, without any obstacles or barriers, I enjoy the record from start to finish, giving it pretty high mark in the end. Six years have passed, it seems they're just good friends with passion, vigour and ingenuity. Good metal is still detectable. Ah, and one more thing, there's no „Victimas de la prohibición” and „Vastagos del miedo” case as all tracks are finished. Finally.


Posted by Pawel Przybyl at 9:31 AM No comments: