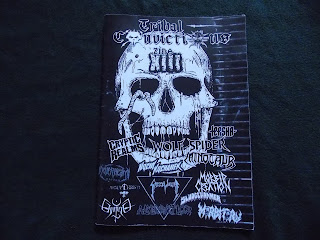 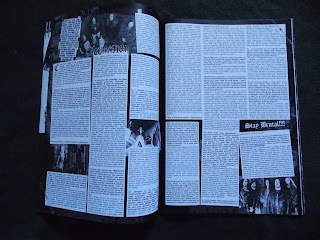 It’s seems to be some kind of unwritten law here in Poland: another year, another Tribal. Yes, Robert doesn’t intend to rest on his laurels and infects the underground with his rotten poetry once again. That’s good, that’s really good in these digital times. The issue doesn’t bring anything new in its general content once intended: I got interviews with old crews like Wolf Spider or Minotaur, and with completely unknown rookies holding one title in the discography. He decided to put the good thing with heavy oriented Nocny Kochanek as well, at least controversial for some metal circles, so there’s almost everything as the metal music is concerned I guess.

Well-dressed in white and black, it looks really gorgeous. With ease I follow the reading content decorated by a proper size of the font, it helps the old zine veterans. I wrote nothing had been changed, yep, we have questions concerning music (yeah, pretty obvious), books, sports (handball and oarsmanship  still rules in Robert’s life) and ‘what do you think about these five albums’ on the end of each chat. As compared to the previous TC, I can’t indicate the intie that blew me fuckin’ away, on the other hand, there’s no a lame one. The whole seems to be very solid and done in a just good way. Some answers are longer and complex (Chimera, Arma Christi), with many details (Aberration, yes, it should be, as the Robert’s label is going to release their old stuff on cd for the very first time).  In turn, the Polish legend Wolf Spider should provide better answers, there are many interesting stories to talk about, I guess. The Minotaur intie is far better if we’re in Jurassic Park. Then, with full of animal spirits, Morbid Creation and Morbitory (what about the answer on Islamic refugees?), it smells passion for metal, passion for killing old-school the way I like the most. Robert follows the path of examining label’s owners and here Kager Balazs, the chief of Neverheard distro gives a good talk with many apt remarks referring to nowadays underground scene. As for sport dimension, Robert and the guys from Tersha amazed me a bit. Namely, they didn’t make mention on speedway in Gdańsk, especially when two riders from my Gniezno score for the team of Wybrzeże… Shame on you!

116, the number of reviews isn’t a corker, as Robert accustomed to such numbers. It contains also those old stuff from “Made in Poland” section with 11 reviews of demo tapes, ‘little-known, little-played’ based on archeological investigation and five albums (“Into the Pandemonium”, “Angel Rat”, “Heartwork”, “Soulless” and “Somewhere in Time”) with different opinions coming from both professional critics and common metal fans. And if Robert is right writing about four first mentioned ones, I can’t agree with notes about sixth album of Englishmen, simply I didn’t find anyone claiming that this was a weak thing in their discography. Anyway, I liked this formulation and Robert’s arguments served in such a precise way – good brave work. Another positive is books part where he describes various titles, not only connected to the metal scene. The real ‘pearl’ is “The Art of Farting” written in 1751 by Pierre-Thomas-Nicholas Hurtaut. The section is quite surprising as the Robert wrote twelve reviews and only six pieces of paper zines – and that’s absolutely sad tendency, unfortunately…

To sum the whole up – I cannot write about any disappointment in the case of Thirteen. Not as hot as Remy Hadley, but the pages smoothly pass my mind with maaany bands to check out in future. The zine has got a clear vision and I always buy it sight unseen. As always, with awareness, humor and experience. That’s the most important.