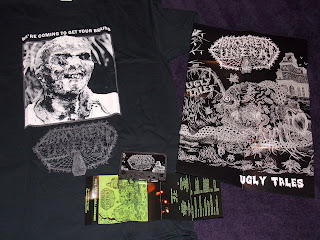 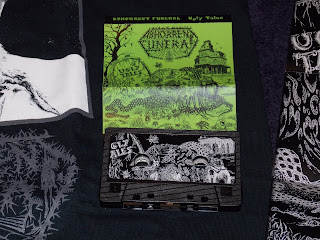 To write the review in a proper way, there’s a need to mention something about… the green. It’s not the case this colour is between blue and yellow in the spectrum. No. I always associate it with serenity, calming the senses and nervous system down and somehow with hope. But here something is broken, something went wrong, though its absolute domination on the front cover. It doesn’t fit because „Ugly Tales” has nothing common with aforementioned things. Read it: no love, no safety, no sanity. No sunshine, no twittering all the morning, no zephyr’s puff. This is about horror. About sick trinity named fear-dread-fright disturbing the peace.
All right, let’s use their bandcamp and call mathematics out: if counted well, the debut lasts 25:42, plus 2:49 for indroductions, not composed by the band itself, but taken directly from horror movies. Yes, I touched the essence here: all the concept behind Abhorrent Funeral has been based on such moving pictures being just a homage to everything that may be scary and ominous. Well, my knowlegde of the issue is rather feeble as compared to Disney’s world for example (I always prefer to look at Pocahontas than Pinhead), yet one of the most important thing is the band didn’t come the acid and, thankfully, it flows without any impediment. As for music created by these experienced musicians, the genre has been described as a (troglodytic) mixture of death and doom with some punk influences giving few more famous ‘in the vein of’ bands. And for sure Chicago rooted Cianide should be mentioned at once. I don’t know how it happened, but „Ugly Tales” became really good variation on „The Dying Truth” crushing debut, although Poznań offers are a bit shorter, and what’s more, the drums sound resembles me Kabella’s performance a lot. Of course, simplicity, plainness and some morbid catchiness are the key factors here but the most important impession is the band has… time. They do not hurry anywhere. Yep, it results from the old school death and doom (mainly) stylistics, you know, this is not FXX Evoluzione, rather Jelcz PR110, without valid servicing, clapped-out, with leaky oil pan and coming off paints. But still ready to hit the road and crumple the bones.

Tracks are varied and I cannot write I recognize them by the intros only but with helpful adjective: catchy as mentioned above. As punkish aura is concerned, songs like „Why You Don’t Want to Come with Me to Crystal Lake?” (great title to elongate this review) or „Tommy, Get Your Saw!” are one the simplest songs I have ever listened to in my whole metal life. But they both slay without any mercy, I admit! In turn, „Braindead”, the shortest in the crazy family, but the fastest one is like a pure contradiction to doom rhythm layers. Vast majority of the songs is maintained in mid pace or even doomy being extremely good stuff to bang the head out, sometimes it gets more speed („Creature from the Swamp” or „Brains!”). Or my beloved „They’re Coming to Get You”, slow start, faster second part. However „Cannibal Attack” (what a beautiful title!) made me file a complaint. This track should be faster, obliterating but it sounds like a ballad when placed at its title. But I do really liked M.V. singing in here (if I can call it in such a way…), he mixed two kinds of it: gutturals and shrieking, and all served in undead form, needless to say. Pity a bit he didn’t use these shrieks more often.

Paraphrasing the song number ten, I can’t avow: „Death to some, doom to others”, as both styles fit perfectly each other. Well, the band’s target was to keep it ugly, dirty and completely ahead. And believe me, they did it without bothering to be irritating, complex or duplicating blindly antyhing I heard before. Those deranged heralds of interminable horror prepared eleven putrid rotten tracks devouring my cerebrum and, to put it briefly, that’s all I can really ask for. Simple to the core but splashy, effective and killing, with no chance to run away. In closing… forget for a while about modern technology, Sneap-like production and fucking smartphones, just listen to „Ugly Tales” playing splendidly released tape all the time till you fukkin bleed…