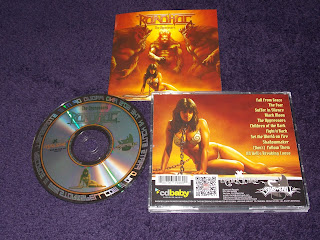 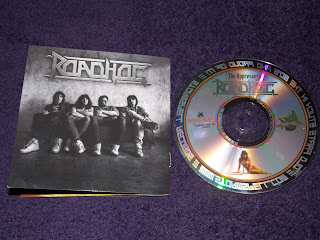 Oppressing the Mind (With One Fracture in the Road)

My huge expectations has increased doubly since the title and front cover have been published by the band. Even if Roadhog isn’t a mainstream giant (in future, who the hell knows that?), the debut impressed me a lot stealing my dreams very often and still ripping the empty silence in my world. That’s true I’m a slave to such songs as „Poison Man” or „Dead of the Night”, many times I just catch myself singing those choruses in many various situations. Yes, „Dreamstealer” was a blast. And still is.

With that in my mind I proceeded to „The Oppressors”. Again under the banner of Stormspell Records, again with drawing attention front cover (this broody busty lady has a haircut similar to Pemo, hasn’t she?). But this time Olof Wikstrand has been replaced by Cederick Forsberg as a sound engineer. And if compared to the debut, the sound realization is given in much modern way, not being any kind of fault to the whole: it is just great keeping the things all audible. So, the main question from my point of view appears: did they give me a better album? Well, let’s see, the beginning couldn’t be better, with even more power and speed comparing to „Liar”, „Fall from Grace” simply cuts my head down. Somehow it touches speed stylistics in early Agent Steel vein: it is fast, crushing, neck-breaking, firing totally effective riffs to the crowd. And however the song isn’t any sign of genre changing, another „Fight It Back”should be a concert firecracker as well, just like a closing track, simple and riffs mesmerizing. But as I wrote, the speedy madness isn’t an oppressing key here and the rest is maintained in rather mid tempo.

The first half is absolutely fine. We have energetic „The Fear” with very catchy bridge and chorus becoming another highlight next to the mentioned duo (however great leads starting at 2:50 and lasting till 4:00 turn the title into „The Bliss”, which is kind of accidental paradox, don’t you think?); we have very slow „Suffer in Silence” and faster a bit „Black Moon” which is probably the best one in family, being just a great tribute to Heavy Load, with surprising intro, mysterious and eerie, definitely something new for the band. A heavy killer, indeed! And the title song ends the first half, „The Oppressors” sound really promising. But the number six belongs to „Children of the Dark” and… something broke in the machine. Those fully balladic 4:32 minutes are the only controversial tunes here, that’s true I did not expect to hear the highlight like „Children of the Damned” or „Watch the Children Pray”, ‘cause it’s impossible I guess. Something was wrong here and originally I gave it many very careful meetings. What’s more, during listening to the whole album, „Children of the Dark” got more chances than others. With a booklet in my hands or with closed eyes. Thinking about using of children choir and pretty nice guitar leads. About powerless Krzysztof vocals and unnatural keyboards in the background. And concerning the final opinion, the song sticks out absolutely, however it’s not the thing I hated it, but it feels so damn out of place here. For a single release as an additional one? Maybe, but this time Roadhog has just failed…

…and luckily „Fight It Back” has woken me from the sonic torpor and brought the band on the right road. Don’t know their intentions but this song is like a balance weight and it works here splendidly. The rest doesn’t bring any confusing surprises, only the stuff I’d like to listen to, it’s worthy to notice completely untypical guitar lead in „Set the World on Fire” (no, it’s not the cover song) or the next track that reminds me a bit about „Annihilator” song from „King of the Kill” album. Then, „(Don’t) Follow Them”, a highlight from last year Ep, and the album is ended by „All Hell's Breaking Loose”. And yes, the track list has been done right now. What about the vocal lines, the underbelly from the debut? When I consider the music itself, the whole idea and performance, lyrics, front cover, production-wise and general heavy metal spirit, Roadhog machine is Premier League level using football terminology. In turn, Krzysztof endeavours are in Championship yet, with Fulham attitude during this season with two wins, five draws and two defeats by the end of the third week of September. It’s nothing extraordinary, just a solid work. His Polish accent is still distinguishable, there are really good moments opressing the mind (in fast songs, especially) and there are moments that need to be improved (mostly in slower parts).

If I am in the kingdom of maths, my final mark is a bit lower as compared to the bestial stealers of dreams, yet I cannot write about any letdown.  When one song is skipped, „The Oppressors” provide ten equal heavy metal shots served in a way it should be executed. Generally speaking, the band matures, it’s not the highest offer yet and I’m sure the musicians know that. But with such a potential, the future looks really auspiciously, don’t it?

Posted by Pawel Przybyl at 8:01 AM No comments: 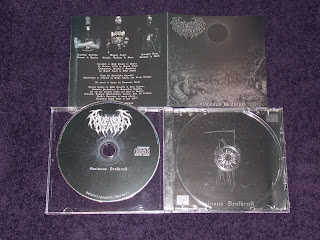 And we have yet another death metal act hailing from the land of Mexico that contains the person of Miguel Angel. His curriculum vitae starts to look pretty impressive, but most of the crews he is involved in, are rooted in deathly dimension: Remains, Fractal Entropy, Darkcreed, Dew of Nothing now to name just a few. It seems he hates a monotony in life and it’s fucking good as Ravenous Death is straight journey to the tunes once intended but served here in a really interested and devastating way, with a proper gloomy atmosphere.

As compared to his mentioned bands, Ravenous Death is definitely more oriented on US death metal scene and even if band’s name comes from Vomitory song, such legends like Autopsy or Death’s mighty debut are some determinant what this „Ominous Deathcult” is all about. However during countless meetings with the stuff clocking in nineteen minutes only, the child of John McEntee and his newer efforts is the main influence for the band I guess. But Mexicans don’t use such crushing almost doomy slow-down parts and the whole is maintained in fast pace mainly, without any needless introductions. There are tempo changes, some shy melodies are audible in opening „Worship the Flagellated” or splendid short slowing down in „Rotten Flesh Murderer”, but the most important here is to strike the listener with simple obscure yet successful metal of death. It’s worthy to draw the attention on vocal butchery in mentioned „Rotten Flesh Murderer” or more head-banging rhythms in „Throwing Up the Guts” which should be a live killer. For sure the last piece is a bit different in the family, „Knowledge of the Occult” due to rhythm section beginning, nice clean vocals (it really fits to the song) and moderate tempo. Simply, what a great final!

I realize that such band like Ravenous Death isn’t anything rare on nowaday scene. I can say even more: the scene is (probably) overcrowded now with maaaany craftsmen, yet luckily the EP shows a potential in creating old-school death metal not bringing boring whiles or impressions ‘oh no, another riffs stealers!’. And to avoid going into oblivion in a flood of titles, Mexicans should sign a deal with a bigger label. Now, they choose a safe way with this short performance, but I do hope to listen to another ravenous tunes very soon. Of course, as a full-length.

Posted by Pawel Przybyl at 8:28 AM No comments: