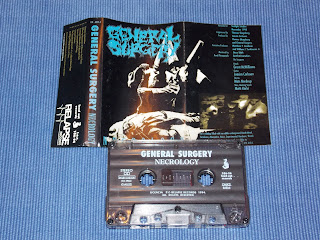 Let me quote following declarations of band’s members: Mr. Kärki, taken from Swedish Death Metal book - “I called this band into being just because of pure love for Carcass. Our only purpose was to copy them from beginning to the end. Our band’s name comes from the book Carcass took some pictures to their first album. We were tribute band. The Carcass-like performance was the only thing we cared about.” And Mr. Carlsson, taken from Polish Mega Sin 4/2004 – “Original music isn’t for us. I remember such thing: we changed some new riffs to be in more Carcass way. That was our only goal – to be like them. For me it was just a good fun, not to be complex like in our parent bands. Just to collect Carcass riffs and make it General Surgery way headbanging all day long. Nobody wanted to be an original. By the way, I love to play in General Surgery to date doing things we want to, not striving to be an unique one. Just pure jollyhead.” Is there anything to add in this matter? I guess not. Anyway, on the start this band was considered as a project crew of the members that came from Dismember, Afflicted, Crematory. Yep, good company indeed. And after three demo tapes, General Surgery signed with Relapse Records bringing “Necrology” to this weak ill world. As compared to the first 7” ep version from 1991, this tape issue (1994) has two bonus tracks which were planned to be put on the split with Soilent Green, finally unreleased.

And as the first track “Ominous Lamentation” fills the air, there’s no surprise because this is just a pure obeisance to “Genital Grinder” track from… Carcass repertoire of course! Then the music follows the well-known style, however, after all these years with “Necrology”, I wouldn’t dare to put an equality sign between it and Carcass early works. I mean, the Swedes seem to be more catchy, with more memorable riffs structures. But by all means the music didn’t get softer, it still murderous, mucid piece of pathological gore grind, sounding so good despite of being for twenty years on the scene. Mind you, this stuff has been recorded at Sunlight Studios, in November 1990, and duo Skogsberg / Carlsson did a splendid job. Musically only almost sixteen minutes on the table, but I‘ve been simply worshiping it since the first meeting.  Extremely fast tempo combined with overwhelming slowdowns, few successful methods of how to disgorge vocal cords, all bathed in clinical ominous aura. And this beautiful guitar lead in “Crimson Concerto” which explores killing dimension of Swedish death metal… What is more, the patient, oops, the tape, is still in good condition in spite of haunting my operating table heaps of times!

To sum the story up, “Necrology” is yet another piece of metal proving that originality isn’t the most important. It just brings me everything I need in this kind of metal genre, well, in metal generally. In those long-ago days this piece had only positive reviews, even Carcass approved General Surgery as their deserving imitator. But for various reasons Swedish surgeon decided to take some rest, probably to go for mysterious and clandestine intern. Being out of a job for many years, he returned with another Carcass eulogists called surprisingly… The County Medical Examiners. The great (mal)practice started again… 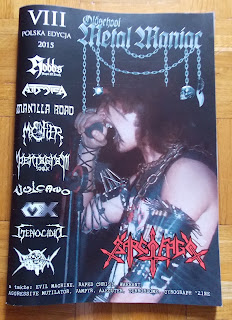 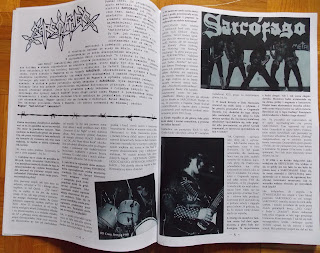 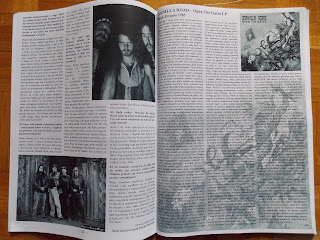 Somehow I overlooked the first issue of this professional release, luckily Leszek did a small reprint and I bought a copy for myself. Maybe it’s not a fully new stuff, as it is considered as some kind of compilation of two previous ones. And what can I say when first seen? For sure he managed to collect another great names, but this isn’t a surprise, as opposed to Polish language included with this number. The whole reading content runs very smoothly, layout is transparent, legible, text without printing or spelling errors. What about interviews? Leszek is an old stager, so there’s no concern he could deliver boring lame questions. That’s true the opening intie with the leader of Sarcofago seems to be a high point this time, and, as he wrote in the introduction to it, this is the last element of the puzzle (look at the previous issues). Over forty questions, answered in a sincere and straight-forward way, make this piece a really good one. But, this opener isn’t the best one in the family. Why? Because no slowing down attitude of Mark Shelton doesn’t cease to astonish me. Again with passion and no-rock-star exaltation he answers the way I like the most. And there’s only one note when Leszek asked about another forms of art. Mark could be more exuberant. All right, the next highlight is Evil Machine definitely, but in the case of Sebastian, I’m accustomed to see such interesting expositions. Then, quite long talk with another scene dinosaur Peter Hobbs, and the shorter but also ass-kicking with old German crushing acts Warrant and Vampyr.

It’s not a secret that Leszek is possessed by Brazilian scene. So, except for mentioned Sarcofago, the presence of Vulcano,  Genocídio, Attomica, MX (it’s first intie with creators of “Simoniacal” I have ever read, unfortunately with many laconic answers…), Axecuter, Dethroned Christ and Mystifier doesn’t surprise me. What is more, the authors of “Wicca” and “Göetia” albums have a special place as well, with described early materials, however interview with Beelzeebubth isn’t anything special.

In regard of the reviews, the whole number isn’t something exceptional, only six pieces of zines and 79 of music releases. Not too much on 118 pages, isn’t it? But eight of them are quite different than the rest. They are just longer reminding me of some kind of essay. And let me mention alternately these titles: “INRI”, “Rotting”, “Die Hard”, “Hellish Crossfire”, “Endless Pain”, “Open the Gates”, “Seven Churches”, “Necrolust”. It is always good idea to show legendary killers in such a way: complex, with many historical facts, splashed by never-ending passion and profound knowledge. Hope Leszek will provide this kind of presentations in next issues…

What to put on the end? For sure Oldschool Metal Maniac magazine is one of the brightest pieces of paper on the entire Polish underground scene. And for sure he invented the method how to enlengthen a calendar day. Just look on all (???) his activities: this magazine, Thrashing Madness Productions, Necromantical Screams band, the art performances. Great that printing force is still with him, as another issue has been announced not long ago. Again with killing names, again with old school spirit spreading its charm through the pages!

Posted by Pawel Przybyl at 1:40 PM No comments: 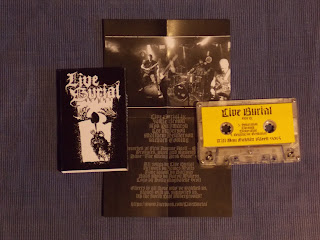 Even if my let’s say real archeological impressions refer to the Mexican land only, this time, thanks to Till You Fukkin Bleed travel agency, I removed to Newcastle upon Tyne, England. There, the English ground gave birth to the Live Burial crew and after reading few promising reviews about the music, I decided to give them a chance. And well, all the opinions weren’t pack of lies luckily. Namely, the band which is complete negation of nowadays, lives in the times of glory that reigned the scene twenty-five, thirty years ago. They are just another delegate of rolling avalanche which torments the soil with old-school deathly sounds. It means that Englishmen don’t provide any new modern sounds. Personally I don’t give a shit about it, as long as the music is performed in such a killing way. Without artificiality, without bizarre effects.

Yeah, exactly, this stuff is the ancient death metal played the way it should be executed. As for production side, the band with Dave Curle as a sound engineer endowed us a trip in time machine. And this is an unquestionable advantage reminding me of all those tapes I have been listening to, with flushed crimson face and wide open mouth, trying to learn something about Napier’s logarithms or fertilization and embryogenesis of the Angiospermae many, many years ago. And believe me, there is no boring time while consociating the sounds, though Live Burial deliver some doom parts as well, with mournful gloomy melodies (especially in the title longest song), the cohesion between fast expressive parts and those mentioned slow-downs has been maintained. It resulted rather long compositions where I can easily fish out quite good lead guitar parts, crushing bass processions being really strong element of the puzzle or agonizing screams of Jamie. The whole has been cemented by slimy raw riffs providing a complete devastation of my senses. And one more thing concerning the atmosphere spreading over the music: it’s just an added value, filthy, gloomy, sepulchral, of a tomb. I can confirm: the grave dimension has been unlocked.

On purpose I didn’t give any names of bands Live Burial took the influences from. This quintet offer fights bravely under the banner of the old school death. And to put it briefly these four killing tracks is a really promising thing coming straight out from Newcastle, contrary to football players residing at St. James’ Park. The releasing date of “Forced Back to Life” has been announced already, so I wait patiently hoping it will be a sledge blow. But now, I invite everyone to purchase this rotten item directly from TYFB before it’s too late. Not a cheap imitation of the gone past, just pure scything weaponry. 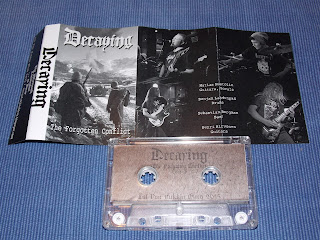 War - A Malicious Half of Peace

Since I have listened to Decaying second album „The Last Days of War” that crushed my head, I became their fan. Well, nothing special in it at all, so purchasing the next title of this band was something natural I’d say. That’s true, I didn’t do it immediately in a day of release, yet “The Forgotten Conflict” is the first title in this year beside two tapes released by Till You Fukkin Bleed as well. Despite of almost 39 minutes, the stuff doesn’t deliver anything new in Finnish discography, but for me who didn’t know their very first demos, it’s just a great idea.

Yep, Finns decided to exhume the old tracks, two of them from the first demo “New Order” and one coming from the debut album, the whole has been re-recorded and completed by two live shots. What about the impressions? Yeah, just great! Simply, these two oldies “The Aftermath” and “…to Decay” seem to be one of the best ones recorded by Decaying so far. The opener is really appalling thing not only if the lyrics are concerned, but due to musical form itself. These eleven minutes take a run slowly, hypnotizing the senses and showing tenebrious horrific visions of the war aftermath. Even if there can be found faster pace, Decaying doesn’t want to propose extra speed in structures, definitely doom dominates, and in such a way the last part of the song is maintained as well, leaving me just speechless. And “to… Decay” doesn’t vary in overall impression, maybe it has more catchy and memorable tunes. This pair is divided by “Conclusion” which is faster, more complex, in a great style known from “Encirclement” album, yet the progress of the band is easily audible.

Musically it’s not a secret that Bolt Thrower and (newer) Asphyx is the key here. But from the other hand, I’m far to claim that the tape is a feckless copy, however one manner of Matias vocal line is very similar to the van Drunen’s performance. Yes, exactly, one manner, because Matias shows the second kind of vocals: good deep growling. And it works just fine for me.

The live side of the band is presented by “One to Conquer” and “The Ardennes Offensive”. With decent recording quality Decaying executes the old school death in a really good way. And what should be added on the end? The title is definitely worth of checking out, as no second of “The Forgotten Conflict” is useless. Just another great tape in my collection.