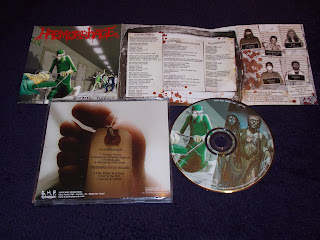 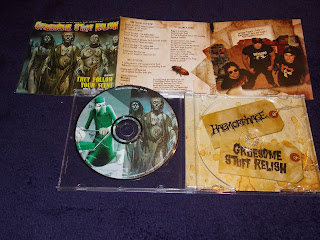 This split is a kind of alliance of autonomous community of Madrid (Coslada) and Asturian (Mieres) part of Spain. “Hospital Thieves / Horror Will Hold You Helpless” has fourteen minutes only, yet it’s enough to tear me into bloody pile of pieces. But let’s start off with Gruesome Stuff Relish as it is completely new band for me. And believe me, even if I was conjoining Asturia with coal mines, as of now I have to reconsider the facts and start to put zombies into Asturian scenery. Why? Because it is full of zombies and it emanates the stench of the living dead from the front cover to the lyrics and music itself. Well, the musical offer is simple, without any broken structures, pointing the main influences to their comrades from Haemorrhage (but with no these insane fast-paced parts) and some old acts like Autopsy or Necrony. Yep, paces are varied, just like the vocal lines, however blackish-like screams should be replaced by more growling style, especially in “They Follow Your Scent”, because it can’t convince me fully. The rest is beyond reproach, even keyboards in mentioned song and “Become a Zombie”. And even if I definitely prefer medical issues than horror themes, this band lands on my never-ending ‘must-have’ list. Damn, they have recorded three full-lengths so far…

And my Spanish gods… They didn’t surprised me and I’ve just got three absolutely perfect shots. The opening title track is perfectly known high-light from “Hospital Carnage”, so I focused my attention on two new clinical cases and… I’m speechless once again. How do they do it? Mad, deranged, tissues and cells grinder - to put it briefly, their essence. The covered song is also better as compared to split with Dead for example. They love punk bands and “Necrophilia” fits to the whole. “SelfMedication” has really… reality-based lyrics, yes, overdose of pharmacology, I know this and all the Polish patients quite well. What else I can add? For sure both productions has very good sound realization, it works here bringing annihilating force of sick music in two different dimensions. And wondering about the future, I do not know what to choose: to be kidnapped by gory bandits with surgical masks or be devoured by blood-thirsty zombies? It means it won’t be nice event, but there’s no other way I guess…

Posted by Pawel Przybyl at 9:50 PM No comments: 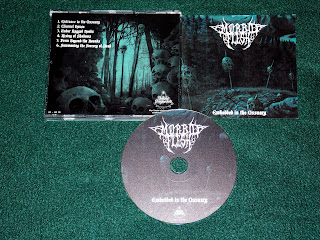 A Night in the Ossuary

These 23 minutes are my first meeting with Spanish Morbid Flesh. And what? This country doesn’t stop to amaze me and still it spits many interesting and promising bands out. And I confirm, Morbid Flesh is definitely one of them.  Since a long time their music has been on my ‘must-have’ list, and I bought it couple of weeks finally. Musically the Spaniards do not discover any new territories… and I’m going to bethink myself how many times I wrote such words lately. Anyway, “Embedded in the Ossuary” is nothing but a variation on the sounds recorded many years ago. Sounds that I don’t have enough. Never. I mean, the late eighties, the first half of the nineties and such scenes like Swedish or English, however with Javi Félez as the producer and sound engineer, they didn’t follow the Swedish tone blindly and gained massive, powerful wall of sounds, a bit similar to Graveyard’s “The Sea Grave”. A coincidence?

The first song is a kind of introduction or, better to write, an invitation to the ossuary and if there aren’t usual Vali performance, some (sampled?) three different vocals line can be heard, however, my rousing applause goes to both guitarists creating absolutely splendid melodies and believe me, I am willing to put it into “Icon” or “The Angel and the Dark River” content. There are moments I listen to this first song many times in a row forgetting about the rest… Well, of course I exaggerate a bit, this album hasn’t been built on it only and with the beginning of “Charnel House”, the deathly breath of morbid flesh is present in the room. The English sorrowful parts are gone, yet some Icon recollections come to my mind while the longest guitar lead appears. But from then on, the Spaniards give a sincere smile to the Scandinavian area.

The music doesn’t shock with an uncontrollable portion of speed. Maybe “Rising of Shadows” has it served in faster way, yet preceded by very slow beginning. Anyway, the base here is to give different paces in the songs and it is done really skillfully with the best example in the closing one which is just a total crusher with paralyzing doom parts. Each track contains of catchy rhythms, riffs and such well-known slowdowns – I really love the way they use it and I cannot choose the leader. Mentioned “Rising of Shadows” and “Under Ragged Hoods” have really interesting leads after those slowdowns, and I haven’t to say how it works! And yes, there’s a need to make a mention on Vali’s vocals – good, audible, but not so deep and guttural. So, if all of the elements of the puzzle fit altogether, is there anything to complain about? No, there isn’t, I confirm. Three long years have passed since publishing the title by Unholy Prophecies, fortunately this April will be a hot month for the band, as their second full-length has been scheduled for releasing. Personally I can’t wait.
85/100
-Tlacaxipehualiztli
(written in April, 2017)

Posted by Pawel Przybyl at 7:38 AM No comments: 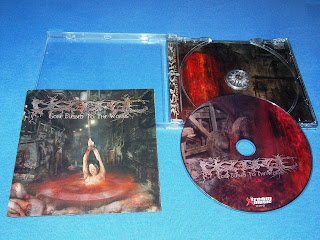 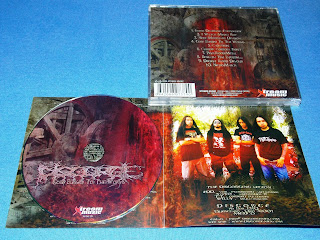 The Disgorging Formula: Gore Blesses Us All

As compared to the first two albums, „Gore Blessed to the Worms” is about severe cold, rheumatoid arthritis and glaucoma. As compared to the “Necrholocaust” revelation which is one of my best death / grind albums, it’s like a necrstorm. So, what do I really mean? I mean the fourth offering of Mexicans isn’t so sick, repugnant and senses slaying like mentioned Big Trinity. Thus, can I say they’re not in fine fettle? And, does it mean Disgorge recorded a weak album and I’m going to write about average, ordinary portion of boring death metal?

But from the beginning: as for production side, the discussed album lies between vile brothers and “Necrholocaust”. Again with Carlos Padilla behind the engineering table, they did the rotten sounding alive, however this time they made great play with bass parts. On the other hand, vocal lines should be a bit louder, in turn cymbals are often too loud and sometimes drums are missing in the storm of sounds. Yes, vocals have been called. As the founding member Antimo left the band in 2004, Egdar took care of it and did it without any bungle. Differences? Practically imperceptible. Edgar met vocalist’s obligations just splendidly with the best example in “Chronic Corpora Infest”. As regards the music itself, for sure it is quite different than predecessor and only two songs “ Beneath the Lugubre.....“ and “Deepest Blood Devour” have been served in extremely fast way. And comparing the whole effort to it, the band slowed down in many fragments, not only playing such great tunes known from “Raise the Pestilence”, not only serving some breathers for Willy, the Skullcrusher, but bringing something new and untypical for them in “Next Mortuary Division” which I liked a lot, or something I did not: slowdowns supported by keyboards in “Cadaveres”.

I push the button play and after one minute a nice guy tells me: THIS IS NO LIFE. Then I drown in… absolutely beautiful sounds deriving from old Swedish school. Believe me, it could easily be a part of “Indecent and Obscene” and next “I Watch Myself Rot” is maintained in such a manner. But do not get me wrong, these Querétaro boys don’t try to be another Swedish star. Their musical face has been sewn by Carcass masters years ago, but Disgorge, combining mentioned influences wisely, with their touch of morbid pathological genius carries all the tunes to another better level. This time, with all Disgorging elements in the air, some technical and broken rhythms are present as well, in fantastic “Pest.Blood.Metal”, “Chronic Corpora Infest” or ending “Necro.March” with many tempo changes. Yes, putridity freshens up. The band rather courageously opens ‘the progress’ small door, and that’s good in such hermetic genre. Not another introductions, not another samples, not false extending of running time. Only music counts.

The album seems to be the most ‘easy to listen’, friendly (however it’s impossible to be swallowed without a choke by vast majority of metal freaks) and elegant in form in the Disgorging family, but it doesn’t mean the band starts to leave its sick musical territory, the suffering lady on the front cover will confirm my words, I guess. The musicians still have no mercy and deliver rotting murderous blows all the time, no matter if I admire riffs, bass passages, frantic drums or sounds produced (all right, disgorged!) by Edgar’s larynx. This album has new colors but it’s not a bastard in home. Or in mortuary, if you like. But one thing really eats away at me, namely “Gore Blessed to the Worms” is the last one so far, recorded in exact three-years interval, so… where are the albums from 2009, 2012 and 2015? Short “Morgue Metal” from 2011 isn’t any kind of answer, right? You said almost nothing to me through all these years. Did you lock your rehearsal up? Did you stop disgorging process? I hope not…

Posted by Pawel Przybyl at 7:44 AM No comments: