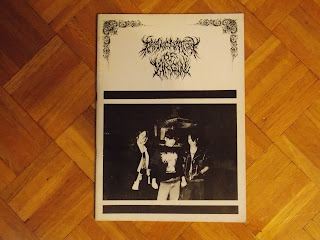 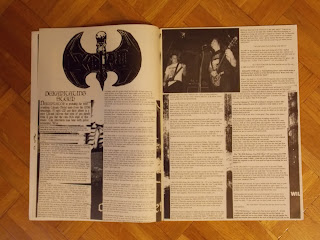 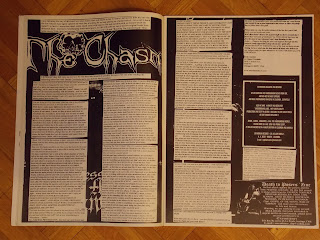 Virgin with the number six and the best King Wolle’s work so far beyond the shadow of a doubt. With the biggest amount of pages filled by true metal only. I’m not surprised as the editor has been faithful to his convictions and beliefs since the very beginning. And if the opening Japanese Barbatos is just ok, the next one Dekapitator seems to be best chat in whole desecrated virgin’s family due to veeery long and interesting (!) answers of Wes, everything can be read in the same breath, believe me. With no time to rest another great intie strikes my eyes, namely Mr. Corchado and The Chasm. And I could mention here Clandestine Blaze, Desaster (did they give a laconic and boring intie anytime???) asked by Peruvian guest Roy Elgueara from Anal Vomit. Then heavy metal glares proudly amongst pages: the Russian Aria done by Johann Jurtaikin – simply great talk with Владимир Холстинин, in addition it was like a flashing point for me to enter the kingdom of this amazing band. If some guests are given, it is a need to mention another one Bart Gabriel who provided really good chats with two Polish legends Kat and Stos, besides the Malaysian Break the Silence and Hirax – yep, these interviews pumped a fresh blood into the desecrated flesh.

Well, looking through the content it’s quite easy to state that everything has just superior quality as compared to the previous works, maybe the English itself didn’t turn into decidedly better. For sure the reviews of the underground press became longer and more informative closing up in 28 pieces. The musical side is richer as well with 155 as the whole number including Ancient Cult releases naturally. In addition King served three live reports and showed one newsletter concerning exotic (as always) and totally underground bands done by Gorehound. And summing all the things up: this zine really kicked my ass delivering many sense desecrating whiles. Unfortunately this is my last adventure with the virgin’s flesh, as somehow I missed the final shot of King, impossible to get it now, I guess… 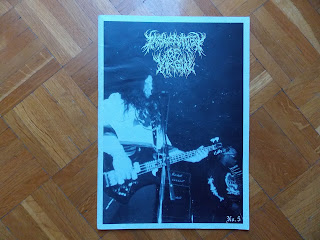 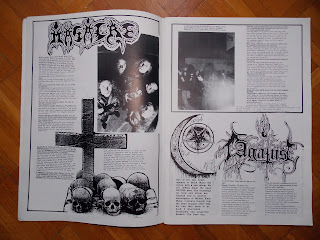 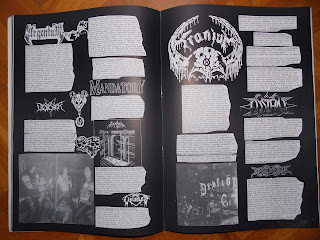 And here we ride with another beautiful virgin that praises the good fuckin’ pure metal decorated mostly by exotic scenes. To put it briefly, written way better as compared to the number four. Not only because of more pages included and better English, but reading is simply smoother. Of course King didn’t avoid boring and lame chats with questions much longer than answers (Black Witchery, Revenge, Blasphemy, as always, by the way…), or very short ones (Queiron, Amon). But luckily the rest is maintained on good decent level. The best ones? For sure Agatus (with really intelligent answers), Kaamos, Cadaver Incubador (done by Hugues Vallot from Eternal Fire zine), Decayed, Sabbat (with total dedication of Gezol), Goatsemen, Sarcoma (done again by Hugues) and Colombian Infernal once again. The King’s questions seem to be more well-thought-out and finished up, but it’s a natural progress as this is fifth issue by now. The whole sparkles with good quality pictures, layout typical for this zine didn’t disappoint. King didn’t forget to write something about live journeys. Yes, finally, as he did it in a truly enthusiastic way. The whole closes three exotic scene reports: one short from Medellin and two describing South-East Asia bands done by Rainer ‘Gorehound’ Schmidt.

Reviews. The overall amount is 187 of music and 17 pieces of underground press, some of them in complex form finally, especially when it comes to a journey into ancient cult recordings. Yes, really great reading! Well, maybe virgin isn’t on top form this time, next issue will show the power bringing the best one so far. 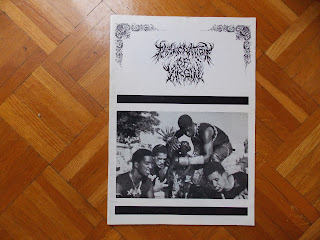 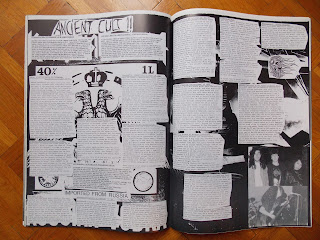 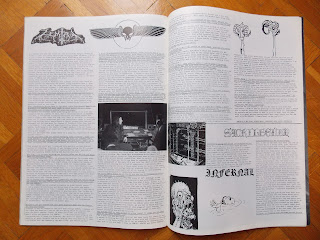 If the previous press King’s attack into the bastions of the underground made a permanent state of erection, the four is rather some kind of disappointment, creating an atmosphere of strange exolution.  Although King managed to provide 56 pages this time, nothing has been changed. Luckily? All right, let’s start with the Posthumous interview as it is pretty good opener, Gustavo gave full-informative and interesting answers. But when I want to sum all the things up, something is missing here. That’s true there are good chats (Negura Bunget, all the Aussie bands, Secrets of the Moon, Infernal, Zemial or astonishingly comprehensive Peruvian Black Angel as opposed to their music). And what is more, the whole is desecrated (or better to write: desecrated?) by Rok in a really fine way, and yes, this Australian son of metal, possessed by ‘k’ letter, should write another dictionary (fukk, diktionary) with his claiming on the start that ‘k’ is more aggressive than ‘c’. Ah, never mind. And… that’s all. Mostly, due to standard questions or laconic answers, or both these things together, the interviews are just ok and nothing more than that. Some of them very short (like Necroflesh with four questions…), or with orgy of printing and spelling errors (Hornagest chat and ‘let’s try to write a demo title the right way…’).

White and black are the only rightful hues. King knows it and doesn’t change anything. However layout and cut’n’paste method seems to be more chaotic. Let’s take five first inties on the plate: King serves five different fonts. If the reviews are concerned, I’m accustomed to read it, yet some of them pretend to be more thought-out shit. But there is wrong way in choosing Mr. Hurricane to write words on music. Simply it’s a waste of paper as his poor considerations on it don’t fit to the desecrated virgin style. One side is bad, but King provides something new to his kingdom, attacking my eyes with new section called Ancient Cult. To put it briefly: really great idea as I always love to read anything on old, not seldom forgotten, piece of ancient hot metal.  What a pleasant feeling reading all these items coming from South and Latin America mostly. In addition pretty vast report from Malaysia revealing both old and newer exhalements from the region. Unfortunately the latter report that comes from Portugal is given in a much poorer way.

Well, this issue brings many conflicting emotions. The whole is bigger than the previous ones with total amount of 210 reviews of music and 18 of underground papers and it’s good, because the virgin grows up. But reading it is like a rollercoaster journey. Luckily this ‘case’ will be improved a bit in the next King’s offers. 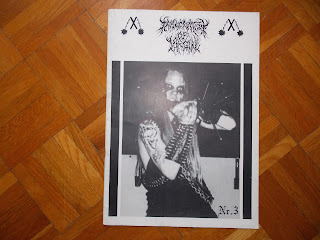 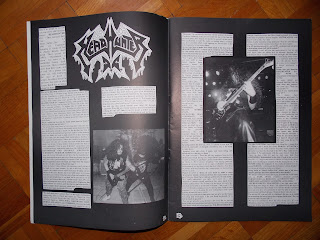 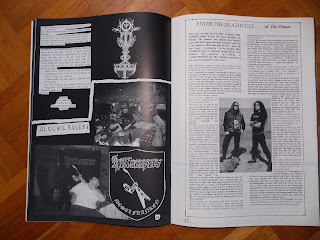 King follows a path that has been traced in the previous issue and #3 isn’t any surprise. Again the same number of pages, the same layout and cult-like front cover. All in black and white manner. The interviews became more interesting, most of bands gave rather long and full-informative answers. And if King’s English seems to be improved a bit this time, he didn’t change the adjectives writings when nationality is concerned. As compared with #2, many famous underground names have been collected, just take a look on the list above. No bios this time but one short live show report is given. The amount of reviews is pretty much the same (121 pieces of music and three zines only…), written the old way: some of them are longer ones with few complex sentences, but others are very poorly written and in a really dilettantish way unfortunately.

The most interesting intie is The Chasm for sure, it is a real highlight here not only that this band belongs to my beloved ones, but due to extensive and conscious answers of Mr. Corchado. What a pity that only fifteen questions have been prepared. Also live chats with Krisiun, friendly conversation with Desaster definitely in alcoholic fumes. Then Mortem, Paganus Doctrina or dedicated to heavy metal Metalucifer keep the proper level, not to mention about the opener Headhunter D.C., but during all these zine years I am accustomed to read good and not-bored answers from Sergio. Any mistakes? Yes, completely redundant is Lord Blasphemate with six typical questions and emotionless answers. Who need such a waste of paper? Reading words from Deeds of Flesh I expected something more though, however such a band is a kind of surprise in DoV offer. And it’s pity that the overall impression is spoilt by the ending Polish Graveland with miserable Nazi mumble and talks about anti-Behemoth nursery -school front. What a piece of shit… Anyway, this issue is just better than the predecessor, simply good portion of written metal. In those days the future of desecrated virgin looked really promising… 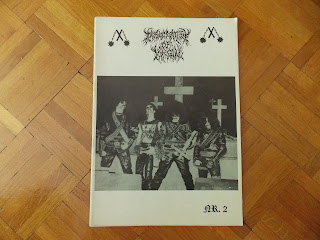 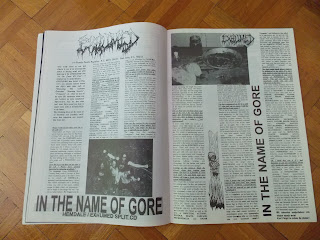 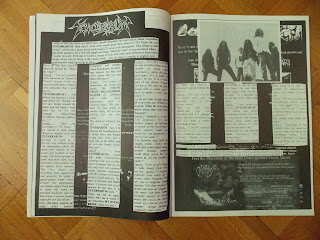 No idea how the press debut of King Wolle looked like. The second strike into the underground shows its cult effigy. Yes, Brazilians from Sarcofago and the beautiful unreadable zine logo. Bought through Polish Pagan Records mail-order in the second half of the nineties, it was something exceptional in my world of print. Not because it was a German zine, but because of unrestrained editor’s love to the exotic metal. Exotic that means bands coming from Colombia, Peru, Costa Rica and so forth. In most cases I faced completely unknown bands (does anybody remember times without internet???), believe me, it was like an archeology work. And the workers at my post-office were really panic-stricken seeing all those strange addresses and packages to this part of the world. Yes, fucking geography!

But what about the written essence? Even if King is on the beginning of his editor path, some details are clearly declared: only pure metal to the bone with big fuck-off to the Cradle of Filth and Dimmu Borgir hordes (I can image astonishment on King’s face while reading Alastis’s answer about techno music in his stereo…). Hardcore hasn’t easy life as well. And on the beginning he gave bands names that didn’t answer his question or simply ripped him off. Let’s go further, to the technical stuff, everything seems to be ok, sometimes layout is a bit messy, or too much a blank space amongst the text column. The quality of pictures or drawings is good enough with the font that is readable not like the logo. Of course, English of King should be mentioned, as it isn’t complex, just a simple way to communicate, with bad spelling of adjective concerning nationality. The interviews are rather not in-depth with standard questions and hackneyed phrases. The best ones here: for sure bizarre and crazy answers from gore worshippers Exhumed, Sadistic Intent (with guest appearance of Heiko S.) or Krabathor. Unfortunately there are some gross errors like ‘inties’ with Melechesh or Ossuary where King showed a few questions only. Pity, ‘cause both bands are pretty interesting. Unfortunately many bands answered in a really short way. However, the Hungarian Dusk made my face smiled: with a typical black metal deduction the bassist wanted to destroy all human race, on the other hand he was hoping to sell the demo in the largest possible quantity. Hm…

The reviews section isn’t a strong point of DoV. They are short, sometimes with two curt sentences only, mostly saying about the genre, with a total amount of 129 (music) and 9 (zines) pieces. Some bios, flyers, commercials and very short Bulgarian report included as well.

To sum all the things up: I liked it a lot due to many unknown bands, but it is more than clear that King is on the start with his writing. Great the next issues are better with another portion of exotic crews. Virgins! Watch it!