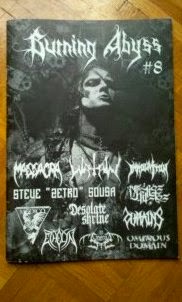 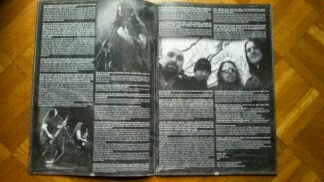 I would be a liar claiming I have known Burning Abyss since the very beginning. One issue from the nineties (#3), number #7 and the newest hot number eight. But I have to admit I lost this title from my radar after #7 three years ago, probably due to it didn’t discover any new lands nor shake my zine world so drastically. It was just decent one however I still cannot forget about lame Tomas (Mr. Yes / No) Skogsberg answers. Inferno wasn’t better. But from the beginning, Maciek, the chief executive of the abyss, decided to reduce quantity of contributors. He hoped to make a better issue… and he succeeded. The first thing which can be noticed is mature and more complex English especially in Andrew’s reviews and his intie with Zetro. The whole is fluent in reading, and I have clear impression that Burning Abyss pretends to be one of the best Polish English zines. Another positive sign is professional layout and lack of any typos or spelling mistakes, but the name of Exodus / Hatriot vocalist Zetro should be spelled Souza, am I right?

To start the extraction of the interviews content, I’d like to present the things I dislike. Firstly, too much pages of advertisings, seven and a half is an exaggeration. Maybe in 100+ pages fanzine I wouldn’t arrest my attention, but in the case of #8 it is impossible. Next, the Sartegos chat seems to be incomplete as it ends too suddenly. I know Rou from his dedication to the underground, he is always pretty gushy. 18 very interesting (!) questions didn’t satisfy my reading famine. Or should I treat it as a first part of Galician word in the abyss? All right, let me jump into Necros Christos that opens the whole. And what? I would be red-faced answering in such a way. Highly interesting and well-thought questions didn’t strike a root unfortunately showing Mors Dalos Ra pretty tired and bored. Or maybe Maciek attacked with too hard and penetrating subjects? Then I can understand.

Now, let me point the better side. A huge amount of reviews: 192 with music and 26 with press plus two short reports from Fallen Temple Records and Till You Fukkin Bleed Records are great fingerpost to know what the underground is currently about. I like the way the reviews have been given, however some Maciek offers should be longer. He is supported by Astus once again, pretty active guy in writing, so know-how is guaranteed. In addition Sascha from Mandatory brought 17 very short memories-like about slabs coming straight from the nineties. As far as the interviews are concerned, the best one here is Immolation chat. Maciek prepared 47 questions and even if I read many talks with this US legend, I was consuming it with a real pleasure, making my mouth waters and putting some classic Immolation records in my disc player. And I can confirm Maciek’s opinion about similar talk in R’Lyeh. Despite of a dozen or so questions, Erik from (mainstream) Watain did provide quite good answers. The same with Zetro, long bifarious insightful chat conducted by Andrew is a good example of famous but modest musician with full boundless dedication to the thrashing scene. The remainder definitely with no such well-known names rules as well. Domains, Desolate Shrine, friendly Maciek’s time with Ethelyn or Ominous Domain smoothly marched before my eyes due to good both questions and answers. And last of all, the case of Medico Peste, and as Maciek signalized in the introduction, interviewing a black metal band in Burning Abyss death metal oriented piece of paper means something. Well, I don’t know the music itself of this Cracow band, but it’s great seeing such an interesting answering from black metal person. I mean, it is neither stupid nor infantile, mostly concise yet absolutely with not boring decorated with megalomania considerations. And Silencer, when asked about religious black metal, gives a smart advice: Clopixol injections as a drug for retarded and deranged ones. And my question is: should it be reimbursed by NFZ?

In a foreword Maciek marks that this issue will be the last one, although any comeback isn’t the impossible. And I understand all his arguments about nowadays metalcore or symphonic avant-garde black metal. What is more, he speaks courageously about making this release mainly for his own need. And even if underground depths won’t enrich with another Maciek paper work, I’ll remember it as a good, sometimes impressive, thing. 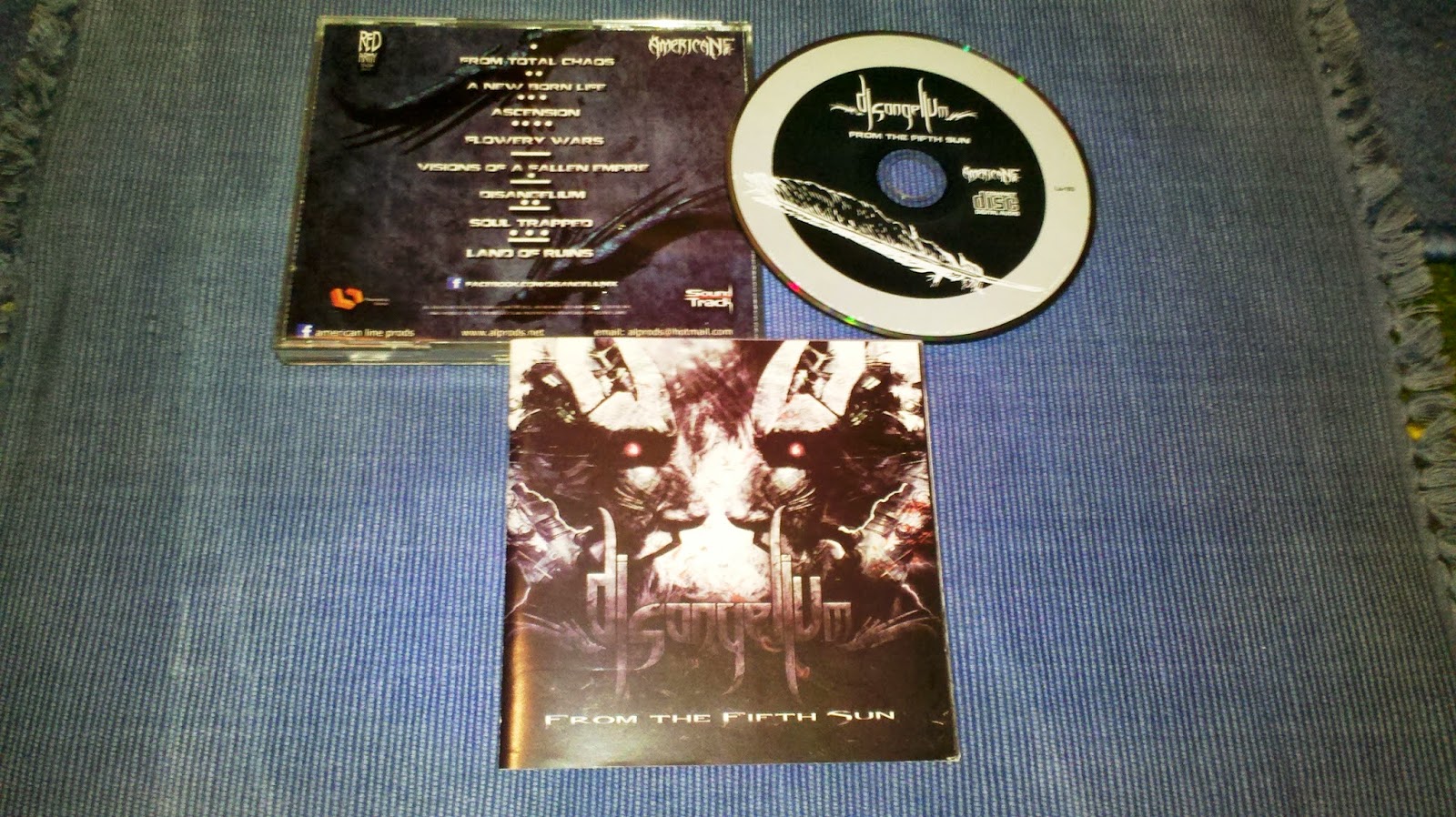 The Era of the Fifth Sun

American Line label didn’t accustom me to releasing such titles. And I’m not writing about quality, but the genre of metal is the thing that is thrown in: technical death metal. The roster of this Mexican company is full of grind, gore, death or black murderous exhalements, but technical is missing if I’m right. On that account, it’s great that “From the Fifth Sun” is a strong point in Joel Morales large family. But from the beginning, Disangelium is rather young band arisen in 2008, with two persons Osvaldo Trejo and Armando Hernández known from Archetype. Rehearsals and recording process brought a debut album on October last year. The band and the main composer Osvaldo didn’t waste his precious time on providing any demos, cd-rs or digital promos. Thus, Disangelium attacked with full-length at once, taking my senses by storm…

…because the first meetings with this album were kinda of shock. I mean, I didn’t expect such a good musical form. Many bands dealing with technical side of the metal genre are rather soulless musician parades serving sonic slack-baked bread. Mexicans avoided it luckily… But before the music, some words about production should be given. Yes, that’s right, it is modern, but the producer (yes, you’re right, again Mr. Trejo) did a splendid job, especially when it comes to the bass lines of Gustavo Esparza. Simply this instrument hasn’t been mistreated. Anyway, decent sound realization isn’t determinant to commit to paper any doxologies, yet my dissection has to refer to mentioned genre, because the band isn’t technical death metal fully. It’s evident Disangelium’s offer has shades of Necrophagist (but without those blast beats Hannes Grossmann did) and Theory in Practice, but Mexicans didn’t use keyboards. These two famous bands are the main artists that come to my mind. But, some paths leading to the kingdom of melodic side of death metal (mostly in old Dark Tranquillity vein) are noticeable as well, just like some touches of progressive metal (several guitar leads and slowdowns).

I have liked this album since the first spin. For a start, it is digestible, and I repeat once again, the music flows freely and naturally, luckily missing the impression ‘poor yokels, look at us and see how great musicians we are!’. And despite of many broken and mazy structures (especially in “Flowery Wars”) and rather fast tempos. It makes the band perfectly avoids the musical stagnancy bringing on the table really crushing riffs: genial “A New Born Life”, „Flowery Wars” or “Visions of a Falling Empire”, where Osvaldo added catchy guitar leads as well, not softening the whole luckily. Also interesting slow-downs can be found that uncover layers of… beauty. Yes, exactly, just take a listen to the beginning and ending of mentioned “A New Born Life”, the middle part of “Ascension” or “Flowery Wars”, not mentioning about the last “Land of Ruins” with its paralyzing opening fragment. Sometimes the feeling of beauty is replaced by reflectiveness moments making spectacular visions in my mind. I can praise Osvaldo performance all the time, yet the work of rhythm section should be mentioned too. And if the drums parts are just ok, the instrument of Gustavo really kicks my ass: it’s great to hear it in such form remembering that Osvaldo is the leading man here. It is very seldom to find the albums with such kind of bass production in the underground, in addition Gustavo is a gifted beast offering his skills in a really proper (killer!) way making the “From the Fifth Sun” album simply better and more exciting. And yes, this is instrumental side. Vocally, Rodrigo Miranda (marked as a session member) gives varied lines: from blackish-like shrieks to even guttural vomits. And he completes the album without any signs of getting bored.

Thus, has this album any defects? I think the band should debate the using of melodic death metal parts. I mean, is it better just to get rid of it to a greater extent. Simply some moments impoverish the general impression. Such a small disaster takes place in the ending song “Land of Ruins” despite of great opening drowned in the sounds of rain and thunderclaps. And even if Disangelium offers tempo changes, the base here is the riffing known from Dark Tranquillity and “The Mind’s I” era. It doesn’t fit to the general musical concept of the album, as it served as the main factor of the song. That’s true that some melodic death metal moments have been stuck in several songs (“Disangelium”, “Soul Trapped”), but it is given in a way I can’t recall any Swedish sugariness. The band remains brutal. And if the choosing the best track on the album is rather hard task (maybe “A New Born Life”? Or “Flowery Wars”…), I can indicate the weakest one without any problem. And only because of these poor sounds I mentioned above…

Disangelium’s musical contrasts gave me so many fruitful meetings exploiting with different forms of emotions. The whole has been strengthened by the lyrics written by Osvaldo. The created words guide to the Mexica (or better known Aztec) image and conception of our world showing incredibly rich heritage of the bygone times. What is interesting, in the booklet, Osvaldo openly asks “¿Are we not Mexicans? Authentic Mexicans?”, forcing to cogitate about the past, the present and the future. Simply this is another factor to praise the album. Bringing it to a close I am sure and comfortable about the next musical and lyrical steps of the band. Maybe I’d like to hear less melodic death metal parts or even not to find them next time, yet I know that the talent of Osvaldo and his pals will take me to another dimension of Mexica legacy… I can’t wait for the next strike.