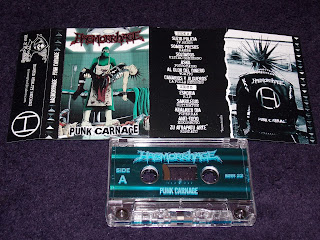 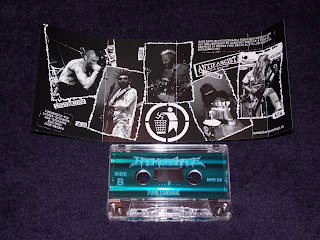 No Time for a Rest: Extracting Punk Organs

Such a release isn’t anything new in Haemorrhage long lasting gore crusade as they released „Loathesongs” Ep in 2000. This time, however closely related to their previous „Hospital Carnage” full-length (title and front cover), the mad pathologists decided to dissect few bands from Spanish punk scene which had a great influence on them. Beside two tracks served here as bonus tracks „Zu Atrapatu Arte” and „Canarios y jilgueros” that I knew before from „Haematology” compilation and split with Embalming Theatre, „Punk Carnage” offers nine covers of bands I had no idea about. Of course I hadn’t, as I do not listen to such music at all. Well, I can name few Polish punk crews, but since now, my knowledge in Spanish punk scene is bigger I guess. But this tape didn’t force me to know all the original versions. Haemorrhage verions are enough for me.

After many listens, there are two complaints. I mean, the vocals of Lugubrious should be more in his base manner, more with general band’s style. Musically, „Anti-Todo” due to very infantile parts of singing is the worst piece here. Otherwise, the opening „Suzio policía” is pretty good, then the latter shortest one „Somos presos”, really fast with even some parts of blasting Jose. The second side has killers too, „Eskoria” reminding me of Toy Dolls with the best vocal parts or awesome „Sakrilegio”. In turn, „Kualkier día” could be a good song for all Alestorm fans.

Those aforementioned bonuses don’t fit a bit in track order. They have been taken from totally different sessions, and it would be great to hear it in re-recorded versions, they are just good songs, especially Kortatu cover slays. Anyway, the whole is a nice musical journey, something different for me, being an interesting title in Haemorrhage discography. Simplicity, vibrancy, pure punk and Spanish language only. Yes, it does work. And for sure this tape made by Morbid Reality Records in 2016 proves one thing: nobody is safe in this hospital. Nobody, even punks…