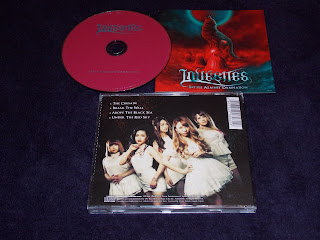 Only few months passed since the Lovebites splendid debut album has broken down the door to my world and overturned a fair amount of titles on the shelf. The ladies seem to follow 'make hay while the sun shines' adage and do it a serious way, furthermore, giving a live show at Wacken Open Air on August of 2018, they became the first Japanese all-female rock band to visit this German festival. And even if another European performances have been scheduled for this year, four new songs managed to complete their third offer. The magic of „Awakening from Abyss” provoked extremely high expectations for new Ep, and as compared to the full-length, one thing should be mentioned at first: three songs have been written by Miyako („Break the Wall” with a help of Miho). For me it's pretty clear, she is becoming a musical leader in the crew. The first one called „The Crusade” was also chosen to be a promotional video piece and... I liked it instantly. Being a modern version of Iron Maiden's „Be Quick or Be Dead”, it's like a war hammer hit in my occiput. And if this heavy song confirms the whiteness is still in great condition, Asami left me speechless. That's true she showed herself as a volcano of true emotions, but in „The Crusade” (during chorus in particular), she is full uncontrollable vitality when she sings „... break free, fight to live on, forever strong...”.

After such an optimistic yet furious opening Lovebites craft „Break the Wall” which is described in the booklet as the fastest and most aggressive song in band's short history. Very mechanic, with almost thrash-based portions of riffs it does a havoc. But, wait, not all the time, there's a surprise, an unexpected guest in the middle: after the duo leads, one-minute lasting fabulous calm break appears. This great balance of emotions shifts the song into something spectacular. In turn the second part of the Ep has been influenced by Rachmaninoff. If „Above the Black Sea” is concerned, „Piano Concerto No. 2” is the main reason Miyako wrote that song and payed the homage to his work. Her vision worked here perfectly, it's worthy to mention amazing guitar leads from both guitarists. And just as on the debut, one track belongs at least to Mao as a music writer, however „Under the Red Sky” seems to be the answer to European power metal, especially when it comes to bombastic chorus. Based on mentioned Russian, it is very optimistic song in musical form, sometimes, in the second part, even fairy-tale with seraphic voice of Asami.

So, is there anything to complain about? Seemingly the Lovebites machine looks impeccably, but I'd like to hear louder Miho lines in the final mix on next recording. Yep, exactly, as the new album called „Clockwork Immortality” has been announced to be released on 5th December 2018. This year! That's absolutely incredible, however I'm not fully surprised at the news as they're just toiling Japaneses. And I am not afraid of the result: the band is in very good form providing fascinating piece of music since its beginning. It is young vivid and modest (just take a look on liner notes from the booklet) organism with absolutely fanstastic cooperation, especially in Midori and Miyako performance. In conclusion, these twenty-one minutes are totally worthy to fight against (musical) damnation and looking at the song titles with their four definite articles, I can write: The Lovebites.

Posted by Pawel Przybyl at 9:32 PM No comments: