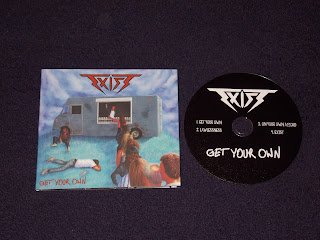 Thrash Sells... But Who's Buying?

The thing was simple: I bought the newest issue of Metal Up! magazine, read an intie with enthusiastic review, and purchased my own copy of the debut Exist's Ep. Well, this is how it works, doesn't it? Modestly released in an independent way as digipak it struck my tired eyes with terrifying sentence 'all lyrics available on our Youtube channel' placed down under the band's photography. I avow you, after reading the last word, I fell my chair off. And I'm asking you right now: what the hell is that? Is this a complete PHYSICAL release? You can call me a geezer and I might know nothing about our modern metal times, but believe me, it's not the proper way. You know, all or nothing. Damn, of course, the fact I didn't get your own lyrics in the booklet doesn't mean I would throw this into fireplace (well, it's fake, I have gas heating...). So, I got up quickly and put cd into the deck without delay.

Anyway, thumbs up, as the band made my blood run definitely faster before the first second of the music. But fortunately, the whole musical content brings positive emotions only. Supported by faultless sound realization being so far away from nowadays Sneap template, those four rookies don't follow the way of Fokus Group, DJ Rodrigo, DJ Jacek, Etna and the likes, and execute thrash metal in the vein of the biggest dinosaurs from the States, including Bay Area movement unaffectedly, with a pinch of madness of „Beneath the Remains” / „Arise” authors. But their flirt with such paradigms enforces high technical skills and precise ideas on the members. Otherwise, it sucks. Luckily, both elements work fine during the clocking time. They know how to handle their own instruments (three of them know Szosa Chełmińska street by heart, I guess), and there's nothing to complain about. The band concocted four tracks, two of them with running time over seven minutes. The opening title piece surprises from the very start with pretty long but very interesting introduction-like. A couple of memorable guitar leads, tempo changing, and seven minutes turn into three or four. But, if the vocal lines are concerned and especially when the debut is on the table, Kacper doesn't scream his lungs out. His middle range fairly convinces me, however adding more harshness and venom to the pharynx should him teleport to something better. I hope, it's the only matter of time.

To get things absolutely straight, the second song „Lawlessness” is a fantastic example how to obliterate poor lambs during the gigs. Extremely good riff-driven, a bit with Exodus lick, it mashes my tissues, giving a breather at 2:54 when short slow-down appears. It seems to be the fastest in the family and the most neck-breaking, and if the first duo is with thrash sigil exclusively, the next „On Your Own Accord” shows the narrow entry to heavy metal dimension. Maybe not so obvious and not the whole piece, but guitar passages starting at 4:12 and 5:27 take a deep bow to the heavy legends from the eighties. And as opposed to the rest, the closing one is fully heavy stuff, scandalously catchy it makes my brain cells rolling all the time, just take a listen to the fragment starting at 1:48 and admire Exist's fascination with title track from the fourth Running Wild album. Man, with my vivid imagination I can see Rock 'n' Rolf Kasparek chiming with them and shouting „they fuckin' rule!”. But wait, it's not over, there's also Steve Harris casting a smile at 5:40 and saying „Rolf, you're fuckin' right”. All in all, adding such tunes determines this song to be the softest, although I do hope Exist will be exploring thrash dimension obstinately.

We live in crazy world and it's almost impossible to keep a watchful eye on every day titles and even if band's name wasn't completely unknown for me as I found their drummer to be live Savior's musician, I didn't decide to listen to anything on Youtube (you know, the place where the lyrics live...) and just followed Tomek Woźniak opinions about „Get Your Own”. Without any expectations back then, now I'm totally amped up listening to this four-piece thrashing insanity. The next thing is the first case on the beginning of the mentioned interview broaching speedway issues in Toruń and Bydgoszcz. Well, I wouldn't be myself ignoring such topic here as I have had methanol in my veins for forty years. In a nutshell, leaving the shameful last season and comparing Exist and its debut shot to the present Toruń's situation, it's a polar opposite to Jason 'I don't need my legs to ride a bike' Doyle, Niels Kristian 'the porky cat' Iversen and Rune 'I want to ride for Częstochowa till my last breathing day' Holta mercenary spirit. Exist seems to be like Paweł Przedpełski, maybe not yet from his best performance as being under 21, but with all chances and hopes to reach similar level. Simply, the youth is coming from the city of Copernicus. But I should take a notice of „Get Your Own” is still underground execution, kept within the genre canons, and done in a right way. I know that statement 'the best metal comes from the eighties' or, as translated into modern Polish 'kurła, kiedyś to było' is quite stock today, however absolutely unfounded are the charges tagging the band an unoriginal one. This stuff simply kicks my thrashing ass, there's a speed, metal madness and catchiness, sometimes Exist goes straightforward, sometimes more complex. It's great they want to play it and they can do that but I'm really far from claiming their parents give them meldonium to the school breakfast every single day. Youth is coming, I repeat once again...

Paraphrasing a bit Britney Spears song „I'm Not a Girl, Not yet a Woman”, Exist exists somewhere in the middle of the road, I would say. The first step towards glory has been done: there is cd, there is a truck for carriage as shown on the front cover, there are stage performances. Now it's time to record a full-length, I do believe with more technical touch served completely without restraint and with lyrics in the booklet. And summing the thing up, let's summon the mighty Sesame Street for a while: surely three letters 'o', 'w', 'n' are major sponsor for my review. Three letters, three combinations: 1. own, as they already have own stuff, 2. now, as this is their time, their chance, 3. won, as definitely they won bringing me such a killing release. A little bit childish and funny, but the whole is very serious. Can't wait for your next move, youngsters! 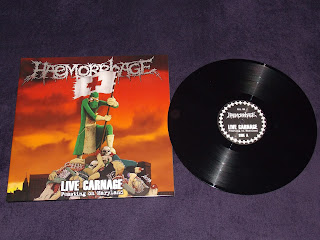 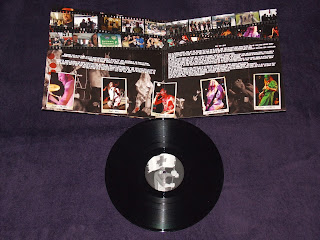 It took me three long years to get this title to torture my gramophone. There were always another things to purchase, yet I didn't lose my favourite gore pathologists and their live performance from my radar. Yes, browsing Haemorrhage large discography, „Live Carnage” becomes the first proper live piece released on black wax, not counting „Grind over Europe” split from 1996 and „The Kill Sessions” executed live, but in Cata Studios. Anyway, no matter what kind of the release is, the new stuff extracted by these Spaniards is a big affair for me.

The note from the gatefold clearly declares: sound taken directly from the soundboard, no mix, no effects, no edits... this is Haemorrhage in its rawest form. And I agree with that in a full extent. Recorded at Maryland Deathfest X in Baltimore, 2012, it provides really crude murderous tune exclusively. Maybe sometimes, in guitar raging conflagration, drums disappear for a short while, on the other hand, bass lines sound fantastic, especially in „Hospital Thieves” and „911 (Emergency Slaughter)”. As for track list, it's obvious the band was promoting their last album „Hospital Carnage” at the time and the first strike consisting of three tracks comes from it. Although there are eleven tracks only, each album has its own representative, pity that my beloved „Anatomical Inferno” has merely closing „I'm a Pathologist” flagship song... Pretty interesting is fact that they shortened „Deranged for Loathsome” keeping the first slow part only, then becoming imperceptibly another song, very short „Putrescent Necromorphism”. Well, I don't think they wanted to have any ballad, yet it seems to be a breather for wrecked audience.

This is just great as it delivers me everything I expect from such a release: eleven gore highlights bathed in sonic pathological madness, with no needless introductions, just pure musical bloodbath I have known for twenty years. And of course with classic question to the maniacs: „How many pathologists...?”. Do I need more to enjoy the music in general? No. 28 minutes runs extremely fast, curt words on the end „see you next time good people” and the carnage is done. So let's face it once again as I've been a pathologist since „Grume” old times. Simple.