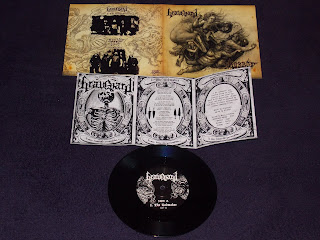 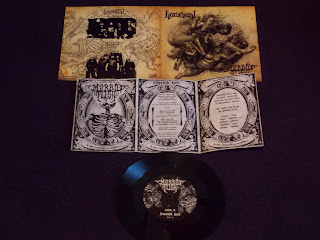 From the Iberian Peninsula Comes the Menace

Before writing anything about the song „I, the Godmaker”, I must repeat once again: their third album from 2016 still belongs to one of the best deathly slabs recorded in the twenty-first century. And I tell you, they are real busy bees looking at their full discography. The year 2018 brought another two titles: „Back to the Mausoleum” Ep and split with Morbid Flesh, however this reviewed song has been recorded during Ep session in 2017. And you know what? The track simply slays. In a flash, it joins the best ones ever recorded by Graveyard. I got crushing riffs and varied paces. I got captivating and truly mesmerising lead-like guitar part. I got 'from the depth of the abyss' vocals. I got just superb solo on the end. I got the ancient spirit of metal. Simply I got a metal anthem. Being completely speechless, „I, the Godmaker” makes my Graveyardish madness still continues...

If their comrades recorded a song that differs from the previous album, Morbid Flesh follows the deathly searchings in „Rites of the Mangled” domain. The main idea of „Seventh Hell” is to keep it ugly, obscure and eerie, not complex but simple and straight to the single cell. Even if the not so fast tempo dominates through the catchy groove parts supported by fantastic melody-driven lead, there are outbursts of furious pace that ravage everything in sight. Also, vocals lines are varied from deep growls to maniacal shrieks. Being in the claws of the old death metal, they boldly juggle different influences. And they do that in a really devastating way.

Released as a strictly limited piece of black wax, this title is definitely worthy of admiration. The songs are neither session cripples nor poor rehearsal failures. They are just two brilliant death metal hits, showing rather different musical view. Even if both tracks have been recorded in the same place (Moontower Studios) by the same man (Javi Felez), there is no way to mistake them. I think the future for those Spaniards seems to be really bright and writing the words, Graveyard has just released another album in September. Thus I wait for Morbid Flesh move.

Posted by Pawel Przybyl at 9:29 AM No comments: 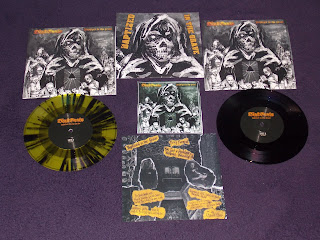 Yes, it finally happened! The Goats are back with completely fresh blood. Despite the line-up scission and, what is the most important, serious health problems, three new songs became another acts of worship for ages. This time, the band joins the ranks of buoyant Deformeathing Production releasing the title in limited vinyl format only. And just like their some previous deadly shots („Don't Go in the Tomb”, splits with Icon of Evil or Calm the Fire), the two songs formula supported by one cover works really fine. But for sure, the closing track is a bit surprising in the goat family. It's not a metal classic like Napalm Death, Autopsy, Repulsion or Carcass before. No. They recorded the song from Swedish punk band called The Baboon Show and I bet there were just few Goats freaks knowing this crew. For sure I was not. And if this track is the softest one in their roster, it is nice stuff to be played live. Good fun guaranteed.

All right, to put it mildly, I do not buy The Dead Goats vinyls for cover songs, and something about the rest must be written. As for production side and the style, nothing has been changed and I face again with Swedish land migration into Białystok region. This characteristic part of guitar sound is familiar since the very first seconds of the „Path of the Goat” debut, yet I have an impression it's been served a clearer way. And if the title track is on the plate, the baptism begins with no time for any reflection, resembling a bit their „The Gloom That Came to Salem”, with some horror talks and so gripping melody-driven in the second part. It rips the flesh because it's brutal, ass-kicking and exhuming Swedish old-school spirit. Yep, I know it sounds like a cheap advertising slogan. But it's true to the core (or grave, if you really wish). What's more, it's not about originality at all, it's all about how they can successfully renew and explore the sounds once invented. And this makes the band just splendid. In turn, the next track „Fancy Funeral” is more slaughtering, kept in the vein of the most frantic songs ever written by them, however the title may mislead and arguably it doesn't refer to Manfred Alois Segieth, commonly known as Fancy, and his future funeral.

Since 2017 reunion, I was awaiting for any sign of their musical activity. It's not a full-length, yet these eleven minutes bring enough music to be fully glad about. I acted pretty fast and bought two versions: the black one for ordinary spins and the yellow/black splatter, definitely for exclusive Sunday's listens, hoping it will survive for a long time, maybe till the next album? And for the end, there is only one thing to do: paraphrasing the Fancy's hit song, these baptized pieces of musical rottenness become „Flames of Goats, flames of Goats..”. Did anyone inform Fancy?

Posted by Pawel Przybyl at 12:58 PM No comments: