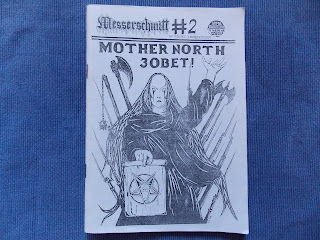 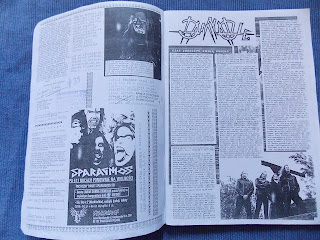 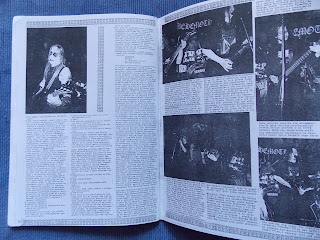 Messerschmitt. Hm… really good name, isn’t it? And despite of being a Pole, the German name sounds a bit better than Elk (PZL.37 Łoś). Anyway I’m not gonna write about War World II flying machines now as I read once again the second attack of Zgierz based piece of underground paper. As for general look and layout – there is nothing special and there is nothing to be ashamed for as well. You know, mighty typewriters ruled the scene at that time. At first glance it is pretty swashbuckling being something like a mortar with various ingredients: Norwegian (cruel Mother North), communistic (Armia Radziecka z nami od dziecka) and has fabulous/devilish touch with a face Koziołek Matołek as a lord of hell. And as the first is turned over, jokes are gone in the twinkling of an eye: Messerschmitt opens the fire with his MG 17. It means that Damnable is on the stage. Yes, simply very good and long intie which focuses on fresh “Inperdition” release mainly. What’s more, some of the remainder are brought in a similar way: Necroscope zine, Trauma (again interesting chat with the leader Mister, yet it’s a bit bitter in general), Demise and closing really fuckin’ good Fuckin’ Bitch and Mr. Szkieletor. Also, worthy of mentioning is the live interview containing the unholy trinity Sacriversum, Hate and Behemoth. Well, I can’t give you a poor one, however some symptoms of fatigue are visible in Lux Occulta, due to still booming popularity just then. In turn Damnation and Hell-Born answers kept in a laconic way at times and Cursed talk (when Pocurvienie band is concerned) is pretty strange and incongruous. Well, I don’t know how the issue 1 was look like, yet this piece is definitely of a metal high-tensile construction. Szymon provides good, well-thought-out questions with (sick) humour and notes oft-times. And even today the whole looks really respectable, not showing any signs of rust.

Reviews, maybe not a huge impressive amount (38 with music and 15 with press), yet they’re written in a good see-through longer style, some of them with a help of two other guys. Furthermore, several bios / articles on various bands, a two-page gore comic book entitled “Perverted Excrements of Rudolf Valentino”, inquiry “My Meetings with Jesus”, and two articles “Mother North Calls” (Satyricon’s mystery uncovered) and “Never Trust an Alien” (just to be on the lookout!). The whole is completed by two live reports, especially interesting is the first gig ever of Behemoth and Hate in the city of Łódź with many good quality pictures. And summing the scrap-iron up: this is only beginning! I mean, if #2 is a machine gun, the next issue is a fucking hydrogen bomb becoming one of the best zines spewed into the underground. Soon I will reexamine it.