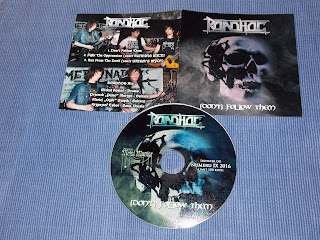 „(Don’t) Follow Them” Ep is an addition to the ninth issue of Oldschool Metal Maniac magazine with limitation to 100 copies. Roadhog’s new presentation brings twelve minutes of ancient heavy metal and only one authorial title song. The opener is mid-paced, and as compared to the debut, it tries to enter the family of such highlights like “Poison Man” and “Dead of the Night”, my beloved ones. It tries, however something (master) is missing here. Well, do not get me wrong, it’s not bad song, for sure it has quite catchy parts easy to remember with almost dreamy guitars sounding interesting and fresh. Sounding… the same recording place gave a good sonic capacity, especially when it comes to the bass lines. The old spirit is present, both productively and musically and that’s the most important thing in the case of this band.

The rest is a bit surprising. I mean, playing the covers is not a big deal but fortunately “Fight the Oppression” and “Run from the Devil” (previously on the Stormspell Records debut issue) is a splendid nod towards the mighty eighties. As Encyclopaedia Metallum informs these tracks haven’t been covered officially by anyone (quick udate: as it turned out after writing the review Chilean Perseguidor did record Running Wild song). So, really good idea to choose them. And if the Running Wild track is performed in a standard way reminding the Germans were once a leading heavy force, “Run from the Devil” (originally by Salem’s Wych) got a new life! This version simply kills, it’s faster and more to the bone, making ‘86 version nothing but a pre-school child. And yes, three tracks pass really fast, I treat them as a curiosity and decent thing for the great magazine, but I still patiently wait for the second album. What else can be added? Ah, front-cover. I don’t like it. It is widely known that in Theraphosidae world female very often eats male during act of copulation. This fact doesn’t work in with Roadhog.