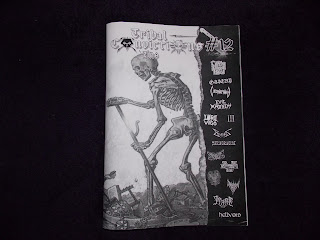 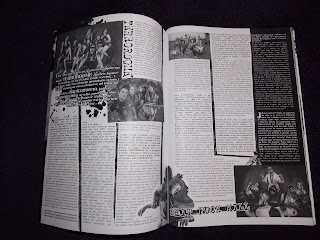 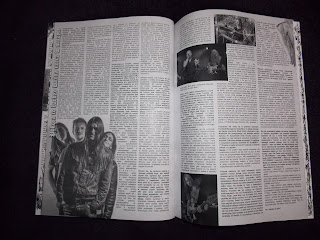 For some reasons I missed the previous issue, but it’s glad to see that this bloody zine Robert’s crusade still lasts without any signs of fatigue or resignation. Or rust. Because Tribal Convictions does the stuff it has been unavoidably created for. Got it? To support the underground scene. But let’s leave the lift right now, as Robert delivers high-protein nourishment once again, proving the paper form is still in fucking good condition. Among other things, the initial editor’s words show the bands that weren’t able to answer despite of earlier agreement to do that. Such an attitude should be nailed to the counter with no mercy, especially it goes to the Polish Repossession. Anyway, the whole content doesn’t screw up luckily.

The front-cover, layout and pictures quality has a professional touch undisputedly, the reading goes really fast and smoothly with an optimal font for my eyes, although music review section has too many blank spaces. I wrote there is no lame chat, but what about the best ones in menu? The start is simply good with Concatenation, kept in a friendly way, but the beast has Terrordome name. Alongside Till You Fukkin Bleed chat, this is the highlight of the twelve. It’s long, full-informative, funny, in ‘fumes’ of absurdity sometimes and… I really liked it a lot. But shame on me, I haven’t got any stuff from this killing crew… Well, the Bartuus label has been already mentioned and such good answers isn’t a surprise for me, I read another intie on very similar level this year. Then, absolutely worthy of careful reading is chat with Black Death Production and Hellvoid. Generally, interviews are given in a fully enjoyable manner, maybe questions in Eteritus have a small chaotic touch (Robert jumps on various themes like a crazy grasshopper), yet I have an impression some answers could be longer as Nitro is a historian. The questions themselves prove Robert is a very experienced guy and fully-fledged. There’s no haphazard here, sometimes questions are much longer than answers, especially when he tries to dispute and draws various conclusions quite argumentatively. But one thing irritates me, on the other hand it hasn’t so significant impact to the final score. I mean, the questions concerning the movies. Personally I almost ceased to watch it and this section rather is not interesting for me, although Robert doesn’t ask about “Independence Day” and the like. Complete opposite is a sport subject, not only football included, but handball and oarsmanship as well. Rousing applause for that, man! And great Robert still asks about five different records. Tradition obligates, though.

Well, now it’s good time to refer to editor’s statement about the number of reviews. According to it, there are multitude views of underground press and musical stuff. So, let’s count the thing: 10 pieces of zines and 82 with music. Hm, these amounts aren’t anything unusual today. Of course, I’m not going to depreciate all the work, as it is something decent but nothing more. As for its content: as compared to musical section written in fast, straight to the core and full of passion and impulse way, zine reviews are longer and more complex. All right, what else? We’ve get five short gig reports and one much longer created by Arek from Morbidious Pathology zine, done in his unique style. Good to see he is still active. Then one opinion poll concerning Warfist gig. But what can I say? This is Poland, guys… Hope it’s one and only such an accident. And the last thing I treat completely unfounded, nothing interesting from my metal point of view, is the chat with Klaudia. It’d be definitely better to see here a report from Syrian metal scene. It would be truly challenging task I guess…

To cut the story short: this issue isn’t any kind of surprise and I didn’t even expect as such. Again bunch of unknown bands to check out, again good reading in this digital sullen world. And I’m telling you, support this guy (act fast, it is limited to 100 copies barely) and all his doings, not only because he is the only freak I know who won Champions League with Wisła Płock.